As Tom Murphy sees it, the University of Pennsylvania central IT department needs to get good at cloud computing -- now.

With more than $150 million in technology projects currently underway at the 277-year-old Ivy League university, Murphy and his team of 275 IT pros have no less a task than a complete overhaul of the infrastructure, which will mostly move the cloud.

"We have a cloud-first program. One of my points of emphasis is that the cloud is here and we've got to get good at the cloud and it is part of our digitalization plans," said Murphy, who was appointed as UPenn's first ever school-wide CIO about five years ago. He moved into academia after working in the hospitality, travel and pharmaceutical industries.

"Cloud has come and resistance is futile," Murphy told Enterprise Cloud News recently. "In the future, as the cloud becomes a norm, and as IT becomes a service, why do they need us for central IT if IT is a service, and they can pay for it as they need it? This is why we are going to be the first movers. The internal IT organization at Penn is going to become the experts at cloud." 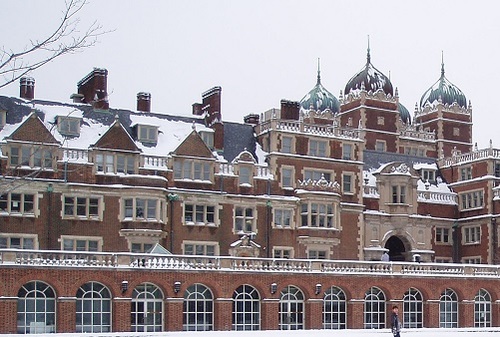 The University of Pennsylvania is now cloud-first
(Source: Wikicommons)

Murphy's experience with digitally transforming businesses stretches back to his days attending a management training program at Marriot. At the time, the chain was looking to automate the front desk -- rooms keys still hung behind the clerks -- and he was asked to be in charge of that system.

It was there Murphy first figured out he liked technology and could manage people.

"My talents are people and project management, so I grew up on that side of IT -- you wouldn't want me configuring your servers," Murphy noted.

Changing UPenn
Those people skills are what eventually brought Murphy to UPenn, which had an antiquated and federated IT system.

Even though he took over the central IT facility -- called Information Systems and Computing or ISC -- most of the 900 IT administrators on campus report into the leaders of the individual schools or centers. The university itself is made up of 12 schools, including The Wharton School and the Annenberg School for Communication, which includes about 25,000 full- and part-time students and more than 4,700 faculty members.

There are also enormous research facilities on campus, and UPenn is involved in nearly $1 billion worth of federal grants to fund those programs.

"The only way to get things done is through collaboration and relationships, and you have to have credibility. It's about getting people to follow you because they want to, not because they have to," Murphy said.

Then there was the technology Murphy and his team had to sort through.

UPenn had its own data center, but also relied on a mainframe. There were some 14 email systems that were not integrated. Some of the university's major research still relied on paper, with information and data stored in old-fashioned filing cabinets. On the security front, UPenn lacked basics, such as a firewall.

Embracing the cloud
However, Murphy had the support of UPenn's provost, executive vice president and president to make changes.

The first of these was a plan Murphy called Cloud First. It called for a significant cloud investment, especially in a multicloud strategy which included Amazon Web Services Inc. and Microsoft Corp. (Nasdaq: MSFT) Azure. The university is also investing in Google (Nasdaq: GOOG) Cloud Platform, but not as heavily. (See Multicloud Can Lead to Management Nightmare  Survey.)

"About 12 to 18 months ago, we started a program called Cloud First. I took 15 of some of the strongest platform, infrastructure, and app dev folks I have and put them on a team and told them 'take us to the cloud, learn everything there is to know,'" Murphy said.

Those lessons were put to the test when Murphy and his team decided it was time to standardize the university's email system. Instead of 14 disparate systems, Murphy presented an choice between Microsoft Office 365, along with Azure for support, and Google's G Suite, which included Gmail.

Murphy's approach was to pull all the stakeholders together and present the various pros and cons of the two email platforms. He hired a project manager to facilitate the conversation and brought in consultants. He explained:

They got a vote. That's the only way to do this, a collaborative decision. And it kind of changed the way they saw ISC. It wasn't us forcing this down their throats. It was ISC facilitating a conversation about the future. What I used to my advantage was the knowledge that many staff and many faculty -- and remember in Higher Ed, the faculty really runs the place -- couldn't calendar effectively. If I was in the school of engineering, I couldn't email someone in the school of nursing because they were two entirely different email addresses  everyone settled on Office 365 and we moved as a unit.

From there, the Cloud First plan took off. Murphy and his team are now closing down the old data center, which included 10,000 square feet of raised floor, and consolidating it into a much smaller data center, which will mainly support research since that data has to stay local.

Next page: Getting Cloud First right
1 of 2
Next Page
Like what we have to say? Click here to sign up to our daily newsletter
COMMENTS
Newest First | Oldest First | Threaded View
Add Comment
Page 1 / 2   >   >>

Michelle 12/8/2017 | 3:19:46 PM
Re: Behind I suspect this is different depending on a university's overall budget. Some larger universities can afford to pay much better than others. Then, there are groups who like to pay much lower than they can afford and end up with high turnover.
Reply | Post Message | MESSAGES LIST | START A BOARD

kq4ym 12/8/2017 | 9:21:11 AM
Re: Behind It only makes sense the the university would have to move forward. Not always easy but with a billion in Federal grant money coming in, there would seem to be enough funds to make the changes necessary in order to keep more grant money rolling in which usually is a huge portion of schools' ongoning income.
Reply | Post Message | MESSAGES LIST | START A BOARD

Joe I live in in a suburb of NY and I can tell you our IT people at colleges are paid well below what they are paid in companies in the area so the people tend to stay for experience and then leave to support their families. The vision nd leadership suffers from a lack of continuity and a true focus on the impact of technology on the campus.
Reply | Post Message | MESSAGES LIST | START A BOARD

Joe Stanganelli 11/29/2017 | 9:02:29 PM
Re: Behind @maryam: I wonder if it makes a difference whether the university is public or private -- and, moreover, which state/jurisdiction it's in if it is public. I.e., all of this going to how well funded it is.

But then I haven't studied this extensively. Maybe I'll ask my colleagues.
Reply | Post Message | MESSAGES LIST | START A BOARD

[email protected] 11/29/2017 | 1:39:15 PM
Re: Behind Yikes scary but not surprising higher ed typically does not pay its IT staff as highly as other fields so they don't tend to attract the best and the brightest. They are almost always trying to play catch up and get their antiquated systems up to speed. Sadly the high tuition costs often go into building construction rather than IT. As more institutions begin to benefit from online students hopefully the focus will change and they will invest in the infrastructure for their faculty and students.
Reply | Post Message | MESSAGES LIST | START A BOARD

Joe Stanganelli 11/28/2017 | 10:16:35 PM
Re: Behind @Michelle: It's just the "I-never-heard-of-that" mindset. One university IT guy told me a story about how some department let an intern use the primary server as his desktop! They didn't think anything of it until IT discovered tools like AOL Instant Messenger on the server!
Reply | Post Message | MESSAGES LIST | START A BOARD

Joe Stanganelli 11/28/2017 | 10:15:15 PM
Re: Behind @Scott: This is a problem with enterprises, too; it's just more obvious at universities. Network operators take note of their enterprise customers' fragmentation and lack of being on the same page, and often find they are better served to ensure that everyone gets in the same room and agrees on what things need to look like and what tools they are going to use. Otherwise you got one group in AWS buckets, another using Azure, another using Google, some miscreant lone wolves relying on some combination of DropBox and personal machines, and so on and so forth...
Reply | Post Message | MESSAGES LIST | START A BOARD

Michelle 11/28/2017 | 2:23:17 PM
Re: Behind It's a sad truth about academia (there are many). Security lags behind as well. There can be basic measures in place, but there can easily be pockets of unsecured content.
Reply | Post Message | MESSAGES LIST | START A BOARD

Scott_Ferguson 11/28/2017 | 9:25:07 AM
Re: Behind @Joe: Those are all good points and when I did the interview, the CIO mentioned that was a big problem especially in the research departments. The other big issue was the way the school's IT evolved. Each of the schools that make up UPenn have their own IT support staff and the people in charge reported up to the head of that school, not the CIO. So, you had issues with a central IT department that needed to work with a lot of competiting agendas.
Reply | Post Message | MESSAGES LIST | START A BOARD
Page 1 / 2   >   >>
EDUCATIONAL RESOURCES