A CIO 'Renaissance' Needs the Cloud

LAS VEGAS -- For several years, it appeared the role of the CIO had been eclipsed by others -- CMO, CFO, chief digital officer -- who looked to claim a greater role and say over what information technologies their enterprises would invest in.

It's not so much over what specific IT products a business would buy, but how enterprises could address issues of innovation and change, especially in a world where competitors could use technology to make themselves much more competitive, much faster.

It may be time for a CIO renaissance?

"The narrative existed is that CIOs could not keep pace with the business," said Chris Pick, the president of the Technology Business Management (TBM) Council, which held its annual show this week here and advocates for CIOs to run IT more like a business and offers advice and best practices about how to make that happen. (See ExxonMobil Adds Fuel to a Digital Transformation.)

"We heard that the CMO can move faster, and then positions such as the chief digital officer emerged," Pick told Enterprise Cloud News. "And I think the CIO will come around again as they figure out how to run IT like a business." 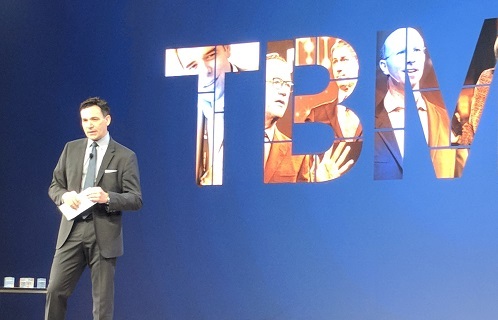 The non-profit TBM Council has its roots in the CIO advisory council for Apptio, which makes software that monitors and benchmarks IT spending -- Pick works for Apptio as CMO -- and has advocated for its 4,500 members to run IT more as a business, and to work with line of business (LoB) managers to create the right types of IT projects.

"I think the renaissance of the CIO will happen," Pick said. "They have to speak the language of the business in terms that people can understand, such as products. They have to know how to take advantage of the economics of the cloud and they have to keep pace with the business."

There are three trends that Pick believes is driving much of this change. The first is putting more emphasis on the value of the products that are being produced and make them more service oriented. A second trend is focusing on Agile development so that IT can keep up with the pace of the business.

The third, and maybe the most important, is the cloud: Understanding how the technology is changing business and how it delivers services to the enterprise, especially through infrastructure-as-a-service (IaaS) and platform-as-a-service (PaaS).

"We want them to understand where the cloud is as far as a hybrid service and how the economics of it is changing and how that generates complexity," Pick said.

With all these changes, CIOs has tremendous influence over IT spending, which Apptio and Rubin Worldwide estimate in a report released November 7 is worth over $6 trillion worldwide when factoring in traditional information technology spending and supporting labor.

This then creates a world where digital is everywhere and where CIOs need to take back some control of IT, especially in terms of governance, risk and compliance. "It's about keeping pace with the business and developing products that offer a differentiated value for the business."

mhhfive 12/4/2017 | 1:11:40 PM
Re: CIO Still Important More golden parachutes may be necessary. With all the security breaches that have befallen some CIOs, I'd think it may be harder to get some skilled professions to take on the risk without the same kind of C-level safety nets other executives enjoy.
Reply | Post Message | MESSAGES LIST | START A BOARD

kq4ym 11/22/2017 | 4:12:34 PM
Re: CIO Still Important Yes, all that is correct and now bringing into the arena of helping being "advocates for CIOs to run IT more like a business," may turn the tide in bringing back the importance o the CIO in having more broad business knowlege to shape IT into helping the company keep profitable and competitive.
Reply | Post Message | MESSAGES LIST | START A BOARD

danielcawrey 11/13/2017 | 3:44:11 PM
CIO Still Important The CIO role is still really important. Who else is going to focus on security? Managing vendor relationships? Those things aren't done by other c-level folks, so maybe a renaissance is indeed in order.
Reply | Post Message | MESSAGES LIST | START A BOARD
EDUCATIONAL RESOURCES