Andrew Penn, the boss of Australia's Telstra, could do with a new job title: Chief Executioner, perhaps. Or The Terminator.

The CEO of one of Australia's biggest operators might not wear a black hood and wield a razor-sharp axe, and he certainly doesn't resemble Arnold Schwarzenegger as a murderous cyborg. But he must terrify employees whenever he opens his mouth. These days it's usually to announce another round of layoffs at the ailing telco, or an acceleration of redundancy plans. Keep it up and Penn might eventually be the only Telstra man left standing, as full automation takes hold.

According to reports in today's Australian press, Penn's blade is now pointing at contractors the company uses in addition to what are typically referred to as "internal jobs." Some 10,000 of these contractors will be dispatched in the next two years, Penn is said to have told an investor conference. That number represents about a quarter of those on Telstra's payroll, says a Reuters report. 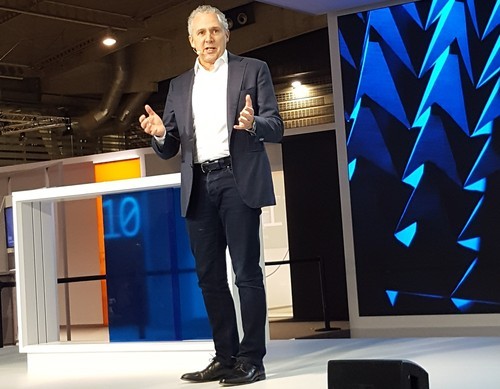 Penn has already been swinging. Around 5,000 contractors have been cut from the workforce in the last year, he reportedly revealed earlier today, implying that about one third of all contract roles will have been eliminated by the time he is done.

All that comes on top of brutal cuts to in-house staff numbers. The goal, announced last June, is to slash about 8,000 of these jobs -- again, about one quarter of the total. Penn now expects to have hacked through 6,000 heads by the end of June, when the operator's fiscal year finishes.

The hefty cuts form part of plan that Telstra calls T22, unfortunately evoking the T2 label for the second Terminator film. Like many other national telecom incumbents, Telstra is under shareholder pressure to automate, streamline and "digitize" its business as it fends off challenges from unfriendly regulators and more technically advanced web rivals -- not to mention other network operators. T22's key objectives are to separate the infrastructure business from the more exciting service-related stuff (and possibly attract new infrastructure investors in future), improve the customer experience and -- of course -- reduce costs.

Lagging financial performance
Telstra's performance in the last six months of 2018 leaves much to be desired. Total sales fell nearly 2%, to about A$12.6 billion ($8.8 billion), compared with the year-earlier period, and earnings (before interest, tax, depreciation and amortization) were down more than 16%, to about A$4.3 billion ($3 billion). Telstra has been hammered by a government decision some years ago to set up a publicly owned broadband network, based partly on infrastructure that was previously owned by Telstra and Optus, a rival telco. The impact on Telstra's business of NBN, as it is called, was a catalyst for the development of the T22 strategy, Penn is said to have told investors today.

Even so, Penn has continued to insist Telstra is making good progress on underlying cost reductions and toward fiscal 2019 targets. That is despite announcing in late May that his company would incur impairment charges of A$500 million ($349 million) this year related to its legacy IT systems (this will lower depreciation and amortization in future, he insisted), that its restructuring bill would rise to A$800 million ($558 million) from A$600 million ($419 million) previously (as headcount is more rapidly cut), and that Telstra will have to book another A$350 million ($244 million) in restructuring charges before 2022. Operating costs will also rise this year, he said, because device costs are increasing. "But the important point is we are delivering the productivity targets that we put out," Penn told analysts at the end of May.

So far, investors have reacted positively. Since Telstra unveiled T22 on June 20 last year, its share price has gained a third on the Australian Securities Exchange, to close at A$3.66 ($2.55) earlier today. Asked by one analyst how Telstra could possibly hang onto its market position after cutting 8,000 internal jobs, Penn gave a convincing explanation that referred to the NBN. "The NBN today employs 7,500 people," he said. "So it's a consequence of reshaping our business in response to that."

But cutbacks are not just about the NBN, Penn emphasized. The hope is that Telstra will morph into an organization that looks more like an Internet company than a traditional telco. The next-generation 5G standard figures prominently in its plans. Noting that Telstra recently beat the UK's BT to a launch of 5G services, Penn said 5G was already available in ten cities, with 230-240 towers up and running, and that coverage would extend to about 4 million people by the end of this month.

Skeptics, however, will draw attention to the considerable uncertainty that still surrounds the 5G business case. On that subject, Penn had little comfort to offer analysts at the end of May. "We get asked a lot about use cases and whether customers need it or want it," he said. "The only thing I would say is that put it in the hands of customers, put it in the hands of developers, and you will see the innovation and you will see the demand as we saw with 4G." The competitive rates Telstra has attached to its 5G plans hold out little prospect of sales growth from the next-generation technology.

A lot will hinge on the success of Telstra's "digital transformation," but analysts may be just as skeptical that Telstra can pull this off. Operators have talked about digital transformation for years, even as they have continued ceding territory to Internet companies. One experienced analyst jokes that "digital asphyxiation" would be a more apt description of the process. Johanne Mayer, a former technical executive at Telstra, highlighted various challenges for the broader industry during a conference in March. Among those were vendor resistance to a common set of interfaces and "painfully slow" progress on standardization in some critical areas. Mayer quit Telstra later that month to become a consultant.

Telstra's overhaul undoubtedly ranks as one of the most ambitious that any national incumbent has attempted. Penn might be an unwelcome sight around the office as far as many of Telstra's employees are concerned, but shareholders with an eye on profitability will celebrate efficiency improvements if the operator can at least maintain sales at historical levels.