Service providers and cloud companies are mainstays of Juniper's business, and those guys just aren't opening up their wallets. And that's hitting Juniper's bottom line, with 2018 revenues down 8% year-over-year to $4.64 billion.

Service provider revenue is leading the way down for Juniper, declining 15% year-over-year for the fourth quarter, which ended Dec. 31, 2018. Cloud revenues declined 8% year-over-year. On the other hand, Juniper's enterprise, security and software businesses are growing.

Juniper expects 5G will be a wave that lifts service provider spending -- and Juniper's fortune with it.

"On telcos, yes, it's been a little disappointing, with overall revenue going down," CTO Bikash Koley tells Light Reading. "But what we're actually seeing is that telcos are definitely preparing for 5G architecture change, and we're seeing telco cloud deployment -- seeing lots of wins." 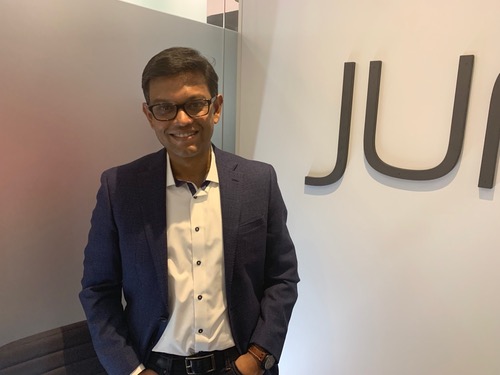 Juniper isn't sitting idle waiting for the 5G wave to come in. It's been getting in shape, staking out a good stretch of beach and waxing its board. And now that the 5G wave is coming in, Juniper is paddling hard to meet it.

Juniper is refreshing its product line to be 5G-ready for telcos and other service providers, Koley says. On its MX Series Router, Juniper is introducing its own Juniper Penta Silicon, with significant bandwidth improvements as well as capabilities such as IPSEC that are integral to 5G. With the PTX Series Packet Transport Routers, the latest iteration of Juniper's chipset is Triton, enabling 14.4 terabits per second per line card, making PTX one of the highest density systems available for IP transport, Koley says.

"Both of these are targeted for SPs for the bandwidth explosion we're expecting to see as 5G gets built out," Koley says. "We're banking on the silicon to provide the economies and end-to-end transport architecture that SPs need."

Additionally, Juniper expects 5G will increase SP security requirements, and it has beefed up its commitment to security, including a high-performance security card targeted at service providers and high-end enterprises.

Hooking up with Ericsson For the radio part of its 5G portfolio, Juniper is turning to a partnership with Ericsson. The two companies have more than 20 service provider customers, marrying Ericsson radio with Juniper MX and PTX for metro and core IP transport routing, as well as Juniper's SRX Series hardware and virtual firewalls "The combination provides a complete end to end 5G portfolio," Koley says.

Though Juniper's roots are as a hardware company, software is strategic to its transition to the future (as it is with competitor Cisco). Juniper has been building out its Contrail software, which started life as a software defined networking (SDN) controller, to serve as a cloud Platform as a Service (PaaS) infrastructure, providing orchestration, management, analytics and telemetry, with support for OpenStack and OpenShift for Kubernetes. "You can use it as general purpose orchestrator for any other services on the network," Koley says.

Also, Juniper plans to ship SD-WAN, in partnership with Vodafone and other carriers, later this year, Koley says.

So will 5G be a balm to Juniper's aching bottom line?

Mixed messages at best The bad news for Juniper is that messages are, at best, mixed whether service providers will increase capex spending for 5G.

On the one hand, Heavy Reading analyst Simon Sherrington says service providers will spend more than $200 billion on capex for their 5G networks through 2023, and much more beyond. Analysts MoffettNathanson expect wireless capex to increase.

Dario Talmesio, Ovum 5G practice leader for Europe, says he's seeing some small spikes in capex spending, but no industry trend in that direction. To some extent, it's a "chicken and egg" problem, he says -- carriers are unwilling to invest until they see monetization, but won't get monetization without investment. And geopolitical uncertainty, including tensions between the US and China, have a further dampening effect on capex.

Gabriel Brown, Heavy Reading principal analyst, mobile networks and 5G, says telcos are holding the line on capex. Although they are spending to buy spectrum, that doesn't help vendors, like Juniper. "Spectrum costs aside, operators have been pretty clear that 5G itself won't cause them to increase capex," Brown says.

Google expects to slow spending on capex this year, after doubling it in 2018. Telenor has no plans to raise capex, AT&T says it might cut capex, and CenturyLink is definitely making cuts.

Carriers need a "service mesh" or "connectivity" fabric to tie together evolving network architectures and shift to metro-edge and distributed service logic and content across multiple clouds. And Juniper is in good shape to deliver those services, with a focus on its "ATOM stack (Analytics, Telemetry, Orchestration and Management)," Brown says.

The Ericsson partnership in particular potentially opens new markets for Juniper, Don Frey, Ovum principal analyst, transport and routing, tells Light Reading. Juniper has historically "not had as much success in the smaller carriers," particularly in Europe and around mobile services. Those carriers don't want to assemble networks from multiple vendors; they want an end-to-end solution. And Ericsson and Juniper together have more of an end-to-end solution than Juniper has alone. "There are a fair amount of carriers that don't want to pick and choose vendors," Frey says. Swisscom, for example, went with Ericsson and Juniper together for their 5G network.

Juniper has an opportunity to take business from both Huawei and Cisco. Cisco, in particular, requires carriers to piece together solutions from multiple vendors. And Huawei does have all the pieces, but "the security noise the US has created" could make telcos reluctant to deploy Huawei, Frey says.