Cable & Wireless: A Tale of Two Capex Scenarios in 2019

Aided by a sizable uptick in wireless spending during the early days of 5G alongside declining cable-related spending, total capital spending across the US Telecom & Cable landscape is expected to rise just 3.3%, to $71.5 billion, in 2019, according to a new analysis of the sector from MoffettNathanson.

Though total spending will be "relatively restrained" in 2019, "there are pockets of strength," particularly with respect to wireless, Craig Moffett, analyst with MoffettNathanson, explained in his recently released "Telecom and Cable Capital Spending Outlook, 2019" report.

"All in all, it's a mixed picture," Moffett added in the report, which, notably, doesn't include spending by data center operators nor capital spending by companies such as Google and others that touch the broader telecom industry.

Wireless spending rising despite some 5G skepticism
Wireless capex will be the bright spot, with growth expected across all four major US providers in 2019... and a relative drop in the bucket from US cable. 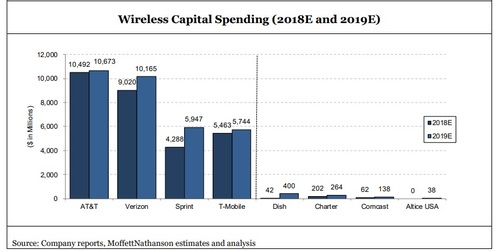 Meanwhile, Sprint will account for 43.5% of MoffettNathanson's incremental capex forecast for 2019, as it plays "catch-up in deploying its 2.5 GHz spectrum after years of underinvestment." T-Mobile will spend on new stores and 600MHz spectrum deployments, but "more dramatic plans" will have to wait until there's more clarity on its proposed merger with Sprint, Moffett said.

Verizon, meanwhile, will account for 30% of capex growth amid an increase tied to the 5G deployment ramp. AT&T will see wireless capex growth of 1.7%, tempered by priorities to reduce debt following the Time Warner acquisition, Moffett said.

The report does factor in wireless-related capital spending by cable operators that have launched or are developing mobile services that rely on MVNO agreements. But their financial impact will be limited. The report sees Comcast Corp. (Nasdaq: CMCSA, CMCSK) spending $138 million in 2019, up from $62 million last year, while Charter Communications Inc. shells out $264 million on wireless this year, up from $202 million in 2018. (See Comcast Surpasses 1M Xfinity Mobile Lines and Altice USA's Mobile Service to Be 'BYOD-Heavy' .)

Spending by Dish Network LLC (Nasdaq: DISH) for its narrowband-IOT network is estimated to be $400 million in 2019 as the company continues to work towards a completion deadline of March 2020. (See Dish Shares Fall Into an Upgrade and Dish's Window to Sell Spectrum Has Closed, Analyst Says .)

Though wireless spending is on the rise, Moffett allows that it's fair to conclude that his forecasts "reflect some skepticism" about the pace of 5G deployment in the US, particularly with respect to the use of millimeter wave spectrum.

"We believe significantly higher spending -- which would certainly be required for a meaningful millimeter wave 5G build -- will await either a more credible business case (still some years away, in our view) or more economically viable mid-band spectrum bands," Moffett explained. "These would be less capital-intensive, but they, too, are likely some years away."

Telco-related wireline capex, meanwhile, is slated to fall from $20.3 billion in 2018 to $19.6 billion this year. That slight drop comes as AT&T completes the fiber buildout commitments originally promised when it acquired DirecTV by July, and as Verizon redirects capital to wireless, Moffett said.

Charter a big contributor to drop in 2019 cable capex
Capital spending among the four publicly traded cable operators covered by the MoffettNathanson -- Comcast, Charter, Altice USA and Cable One Inc. -- is expected to decline significantly this year -- some 5.8%. 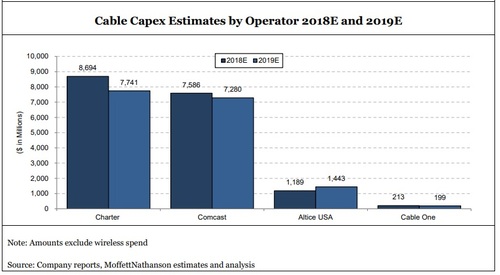 According to Moffett, Charter will account for 93.6% of the capex decline projected for US cable capital spending (excluding mobile capex), as the MSO completes its all-digital transition in the acquired Time Warner Cable properties.

But there's more to cable's capex story. "[B]aseline demand for set-top boxes is falling with declines in video subscribership (even small changes in net growth can mean large changes in the need for new set-top boxes," Moffett notes. He added that retail devices, such as Apple TV boxes and Roku players, are also displacing traditional cable set-tops.

With those video-related declines as the backdrop, MoffettNathanson sees aggregate cable industry CPE spend as a percent of revenue dropping to 5.1% in 2019 from 5.9% in 2018, and plummeting to 2.6% by the end of 2022.

While declines in consumer premises equipment will be the biggest driver for lower cable capex over time, the completion of the latest round of broadband network upgrades is also factoring in.

Of note, cable's migration to DOCSIS 3.1 "is largely complete" among the MSOs covered by the firm. Altice USA is using D3.1 as a stop-gap in some areas as it instead pursues a broader fiber-to-the-premises network upgrade strategy. An exception among its US cable peers, Altice USA is increasing capital spending. But that spending is comparatively small, not at the scale required to significantly move the needle on overall cable capital spending. (See Comcast Wraps Up DOCSIS 3.1 Rollout and Altice USA Lights Up FTTH Service in Long Island.)

MSOs such as Comcast are also starting to pursue Full Duplex DOCSIS, an annex to D3.1 being branded by the industry as "10G." But the investment for that move will be incremental and is not expected to be anywhere near the level of spending that went into the initial DOCSIS 3.1 upgrades. (See CES 2019: Cable's 10G Tech 'Will Work' and NCTA Trademarks '10G' .)