It's too "simplistic," said Nick Read, Vodafone's CEO, when interviewed by CNBC last week about the debate surrounding Huawei. Supposedly worried that its products contain spyware used by China's military, governments and telcos are shutting the Chinese equipment maker out of 5G business. Those concerns have now driven Read to "pause" Vodafone's rollout of some Huawei equipment while he talks to politicians and security agencies. (See Eurobites: Vodafone Presses 'Pause' Button on Huawei Gear.)

A full recording and partial transcript of the interview, sent by Huawei Technologies Co. Ltd. to media outlets including Light Reading, shines a revealing light on some of the dividing lines in that debate. Unfortunately, for Huawei and many of its customers, it does not point the way toward any swift resolution of differences. 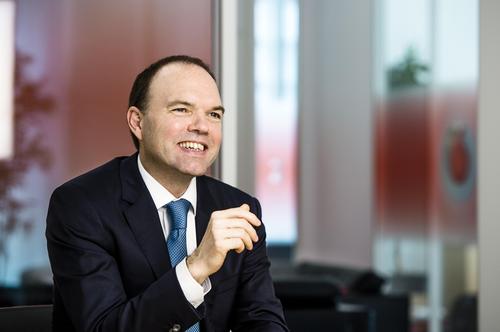 Nick Read, Vodafone's CEO, worries that a debate about the security of Huawei equipment has been too simplistic.

The first thing to note is that telcos do not see eye-to-eye with their governments -- or, rather, with the security agencies of those governments. They have flocked to Huawei as a price-competitive supplier of high-quality network gear. Some even think it has a technology lead over European rivals Ericsson AB (Nasdaq: ERIC) and Nokia Corp. (NYSE: NOK). But they either disagree that Huawei poses a security threat, or simply do not care. Huawei now has a 35% share of the European equipment market, according to Read, and has signed 30 5G deals worldwide. In contrast, Ericsson claims just ten. (See Huawei Founder Warns of Job Cuts  Report, Ericsson Hails First Annual Sales Growth Since 2013 as 5G Comes Calling and BT's McRae: Huawei Is 'the Only True 5G Supplier Right Now'.)

Is it likely that any telco would not care about a security threat? That possibly depends on the nature of the threat. No company wants to see its networks and IT systems criminally hacked, especially if this leads to financial losses and customer dissatisfaction. But the risk that a government is using a network to snoop on other countries, or the citizens of its own, is perhaps a bigger issue for security watchdogs and civil rights groups than it is for a telco. Moreover, if any such abuse came to light, Huawei's ubiquity could be a shield against reputational damage: Customers are unlikely to abandon one service provider for another using the same supplier.

Telcos that have acted unilaterally to restrict Huawei may sense a ban is imminent or have come under government pressure. This certainly rings true with Vodafone Group plc (NYSE: VOD). Fretting about the implications of a complete ban, Read told CNBC that Vodafone would halt its deployment of Huawei products in the "core" of some European networks. "Now it is the moment to engage with the security agencies, with politicians and with Huawei to improve everyone's understanding," he said.

Read has deliberately thrust the core into focus. If bans are forthcoming, he evidently hopes they are limited to this "intelligent" part of the network where a bad actor could run amok. In Vodafone's case, replacing Huawei in the core would be a complex, two-year job, he said. The UK's BT Group plc (NYSE: BT; London: BTA), which is already stripping Huawei out of mobile core networks, has also said the process will be tricky and time-consuming. But the financial impact on Huawei and its customers should be comparatively small. Most of the spending and manpower goes on the radio access network (RAN), the site antennas and supporting equipment that ferry traffic around the mobile network. "Clearly, if there were a complete ban at the radio level, then it would be a huge issue for us, but it would be a huge issue for the whole European telco sector," Read said. (See Huawei Cut Out of BT's Mobile Core, Optical & Edge Plans.)

This nuance may be what Read specifically meant when he said the debate was too simplistic. It is hardly a surprise that Huawei has leapt on his remarks, distributing them to various reporters. If Read, as the CEO of one of the world's largest non-Chinese operators, can persuade governments to adopt a more considered and less stringent approach, he will have done Huawei an enormous favor. Other telcos that have a RAN relationship with Huawei, such as Germany's Deutsche Telekom AG (NYSE: DT), may also be looking to Read as a representative of broader industry concern.

Yet, so far, not a single government ban has made the distinction between core and RAN gear. Australia and New Zealand have taken steps to exclude Huawei from the entirety of their 5G networks. Japan is to ban its ministries and the military from using any Huawei gear. The US has warned service providers off using Huawei (as well as smaller Chinese vendor ZTE Corp. (Shenzhen: 000063; Hong Kong: 0763)) since 2012, when a government report first described Chinese vendors as a potential risk to national security. (See Where Huawei Fears to Tread and How the West Can Hurt Huawei.)

Spooks may be unconvinced that infrastructure is any safer if Huawei is excluded from only the core of the network. In the current climate of suspicion, persuading them otherwise will not be straightforward. Perhaps the best Huawei's supporters can hope is that Read's efforts give rise to a more rigorous and less simplistic debate about network security. But where that will lead is anyone's guess, and Vodafone cannot halt core network spending indefinitely.

Until now, the bans and exclusions have been largely confined to the 5G market. The gravest danger for Huawei, Vodafone and other telcos is that government action becomes all-encompassing, with the Chinese left firmly outside all parts of the network. This is one debate that might grow even more simplistic than it already is.

Gabriel Brown 1/29/2019 | 5:59:43 AM
Re: Never forget the power of perception Vodafone is fairly sophisticated about this. For instance, in the UK, where it has a lot of government and large enterprise business, it is primarily an Ericsson shop. In other markets where it is a challenger and the goverment business is with the ex-incumbent it is more lilkey to use Huawei -- for instance, in Spain.

It also makes a distinction between RAN and core. It is in the RAN where the mooted restrictions on Huawei would really hit European operators hard.

Some kind of accomodation along these lines seems most lilkey at this stage. But then, who knows...!
Reply | Post Message | MESSAGES LIST | START A BOARD

Because perception counts for a lot. Already, in private conversations, we hear about network operators deciding not to engage with Huawei at all, at any level, because taking that approach makes negotiations with government customers, and those that have to do business with governments, much simpler and easier -- there are no questions to answer about perceived security issues related to the deployment of equipment from a Chinese vendor that is under the global spotlight.

Even the idea that a network operator might be doing business with a company that is perceived to be a security threat is enough to put doubt in the minds of decision-makers.

And that is where we are in the world.

So it's a very tough call, espceially if a network operator has worked with Huawei for years and not encountered any unusual or deal-breaking problems.

Vodafone's approach of moving away from Huawei's core network tech might just work -- but explaining to influential people who do not have an understanding of communications networking that such a move  should resolve any security concerns, and CONVINCING THEM to make a decision that is counter to the over-riding perception that Chinese tech cmpanies are not to be trusted on anything, is not going to be easy.

It's great that Read has shared his thoughts. Let's hope he will do so again in 6 or 12 months and provide some insight into whether this approach has paid off, both in terms of Vodafone's needs and in terms of customer/partner/political engagement.
Reply | Post Message | MESSAGES LIST | START A BOARD