Dell CTO: Public Cloud Is 'Way More Expensive Than Buying From Us'

The public cloud, meanwhile, is best for non-critical applications where enterprises have no competitive advantage to customization, such as email and messaging, says the CTO.

Roese's statement flies in the face of conventional wisdom, which holds that public cloud is less expensive than private cloud. After all, when you're running applications on-premises, you have to manage servers, storage, networking and other equipment. When you go to the public cloud, day-to-day infrastructure management is somebody else's problem and some costs can be spread across multiple companies to provide efficiencies.

But conventional wisdom is wrong in this instance, Roese tells Light Reading during a recent interview at Mobile World Congress in Barcelona, where he also told us that enterprise IT is more complex than its hyperscale counterparts. (See Dell CTO Expounds 'Insane' Theory About Enterprise Complexity.) 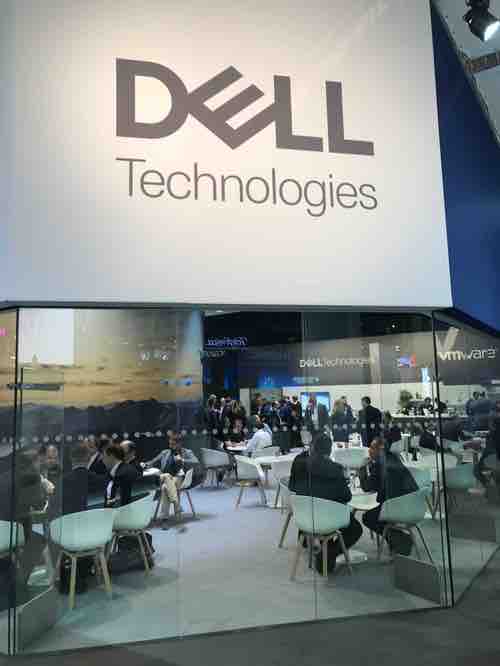 Dell at Mobile World Congress in Barcelona last month.
Want to learn more about network automation? Register today for Light Reading's Automation Everywhere on April 4 in Dallas. We will be tackling the business and technology challenges behind driving network automation. The event is free for communications service providers  don't miss out!

For modern applications, running in containers, "the benefit of moving to a public cloud is not apparent," Roese says. "Deploying containerized apps is already as simple as can be." Some 40% of containerized applications in the world are running on premises, according to statistics compiled by the Cloud Foundry Foundation, says Roese, who is chairman of that organization.

Public cloud doesn't reduce capital costs for the enterprise, because the enterprise still has to pay to use the hardware inside the cloud provider, he says.

"And it's way more expensive than buying it from us," Roese says. "If you own the hardware it's less expensive."

How sure is Roese about that? "I guarantee that if you deploy a cloud-native environment, the cost of buying from us and operating it over time is far cheaper than a per-second instance of [Amazon Web Services Inc. ] EC2," Roese says. "It's cheaper if you own the infrastructure than if you rent it."

But public cloud is still important. "We've always believed the future is a multicloud environment for the enterprise," Roese says. Those repeatable workloads are important -- email, marketing web servers, and other "tier 2" apps that are uninteresting but necessary -- and they run best in the public cloud.

And the public cloud plays a role in mission-critical modern applications, providing burst capacity for peak demand, as well as allowing enterprises to expand to geographical areas where they don't have physical infrastructure, Rese.

Of course, it benefits Dell to spread the belief that on-premises deployment is less expensive than public cloud: The company is in the business of selling on-premises equipment.

Evidence on the relative cost of cloud vs. on-premises is scant and contradictory.

In favor of Roese's argument: Dropbox moved off AWS to its own infrastructure in 2015, and reduced operating costs by $74.6 million over the next two years, according to a US Securities and Exchange Commission (SEC) S-1 report filed last month.

On the other hand, Atlassian migrated its Jira and Confluence collaboration services from on-premises infrastructure to AWS. The company cited scalability, reliability and extending geographical reach as primary reasons for the migration, rather than cost savings, though it does see depreciation of equipment as a benefit. (See Atlassian Goes 'All In' on Amazon Cloud.)

Evernote Corp. migrated from its own data centers to Google Cloud at the end of 2016. As with Atlassian, cost savings weren't a primary reason for Evernote's migration; it was looking to concentrate its developers on user-facing capabilities rather than infrastructure. Evernote also wanted to take advantage of Google's AI expertise. (See Why Evernote Picked Google Cloud Over Amazon, Evernote Gives Itself High Fives, Completes Migration to Google Cloud and Evernote Wrapping Up Google Cloud Migration, Looking Ahead to Machine Learning

And Intuit Inc. (Nasdaq: INTU) said in 2016 it was moving its entire infrastructure from on-premises to AWS, citing agility as a primary reason. (See Intuit's Not Scared of Cloud Vendor Lock-In.)

Finally a 2016 study by Cloud Fusion Alliance found a potential 30% savings for cloud over on-premises deployment, though the study acknowledged the situation is complex and highly variable. Also, back in 2016, containers and Kubernetes technologies were light years behind today, which makes a 2016 cost comparison of questionable applicability today.

kq4ym 3/28/2018 | 4:07:35 PM
Re: Proof points Yes, we'll have to be careful not to fall for alternative facts or attribute fakeness to what might be the real truth of the matter when comparing costs and expenses going one way or another. Falling for the hype and not testing our unique situation can certain create havoc at the bottom line.
Reply | Post Message | MESSAGES LIST | START A BOARD

Phil_Britt 3/22/2018 | 9:57:29 PM
Re: Proof points Who needs proof points in this day of "alternative facts." Companies, politicians and many posting on social media have no concern that their "facts" will be questioned. And, unfortunately, in many cases, questionable facts are taken at face value.
Reply | Post Message | MESSAGES LIST | START A BOARD

mendyk 3/20/2018 | 10:35:32 AM
Re: Proof points Dell's "mischief-making chief technology officer" appears to have tapped into the defining characteristic of this mini-era: the truth is what you say it is. That may not be helpful to enterprises making cloud strategy decisions that will have long-term ramifications.
Reply | Post Message | MESSAGES LIST | START A BOARD

The difference is that it is quite deterministic, but varied based on application.  In most markets, one size does not fit all.

mendyk 3/19/2018 | 2:05:10 PM
Re: Proof points You could guess right, or you could guess wrong. Or flip a coin. That's usually not how due diligence on important decisions works.
Reply | Post Message | MESSAGES LIST | START A BOARD

kq4ym 3/19/2018 | 2:01:33 PM
Re: Proof points It would appear the Dell may have a point, of course it all depends... In some cases you'll save money on the private end and sometimes on the traditional cloud. Number will have to be run or guressed at to see what works best.
Reply | Post Message | MESSAGES LIST | START A BOARD

The difference is that the service that I ran (an email service) saw much less of the massive ups and downs compared to the shopping sites.  So our need to dynamically scale was much less.

PS - we used Dell computers...but there was nothing magic about them.
Reply | Post Message | MESSAGES LIST | START A BOARD

mendyk 3/19/2018 | 10:09:20 AM
Proof points Does Dell have any hard evidence that private cloud is more economical than public? That would be kind of important.
Reply | Post Message | MESSAGES LIST | START A BOARD
EDUCATIONAL RESOURCES