Atlassian Goes 'All In' on Amazon Cloud

When Atlassian decided to take its Jira and Confluence developer collaboration tools to the cloud, the company went big.

The two tools are more than a decade old -- Jira, a project and issue tracker, launched in 2002, and Confluence, a team collaboration platform, launched in 2004. And the architecture showed its age, Mike Tria, Atlassian head of infrastructure, tells Enterprise Cloud News.

While Jira and Confluence are cloud services, they were architected as if they were on-premises software; each customer had its own instance, and growth was constrained by that architecture, Tria says.

Atlassian started redesigning the two services in 2015 to move them to the cloud. The platform choice at the time was a no-brainer, Amazon Web Services Inc. At that time, AWS's competitors didn't have the breadth of offering available on AWS, though that's changed since then, Tria says. And AWS offered the scalability Atlassian required. 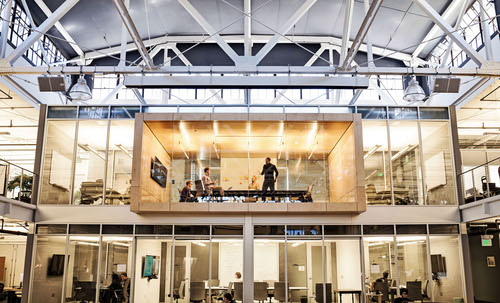 Atlassian offices. Photo by Atlassian.
Want to learn more about network automation? Register today for Light Readings Automation Everywhere on April 4 in Dallas. We will be tackling the business and technology challenges behind driving network automation. The event is free for communications service providers  dont miss out!

Having decided to transition to AWS, the next question was whether to move the applications as is or rewrite them to a modern, more flexible architecture, Tria says. Atlassian had tens of thousands of servers and hundreds and thousands of containers all running at capacity.

"Do you lift and shift and plop it on Amazon, or do you change it?" Tria says. Atlassian chose to rewrite the applications to improve flexibility and scalability. Otherwise the volume of server resources required to run the applications would have been prohibitive.

"We didn't want to destroy Amazon and take up hundreds of thousands of instances," Tria says. Lift-and-shift would have put Atlassian in the top ten of AWS's biggest customers.

"We decided to go all in -- take a single-tenant, monolithic architecture and break it up," Tria says.

Atlassian needed the infrastructure change to stay on top of growth. The demand for developer tools like those Atlassian provides, is growing as even old-line businesses in manufacturing and agriculture are transforming to technology companies, delivering cloud services. The company's revenue for the quarter ending Dec. 31 was $212.6 million, up 43% year-over-year. Total customers were 112,571, up 4,825 net new customers during the quarter.

Atlassian called the transition "Project Vertigo." The company moved its last customer to AWS in December. Atlassian made the transition "silently," without letting customers know what it was doing, in order to avoid the overhead of coordinating with customers, Tria says.

Atlassian had no need to coordinate with customers; it successfully made the transition without any service disruption, Tria says.

The transition to AWS is aiding Atlassian in global expansion by providing services from data centers near its customer locations, reducing latency. Last year, Atlassian launched services in Europe, which it was able to do because it was able to quickly spin up infrastructure in Ireland. Previously, customers in the EU complained about slower response time and latency communicating with the US; the move to Ireland improves performance, Tria says.

"Reliability has shot way up," Tria says. Previously, when Atlassian upgraded service it had to shut services down, which it did every few months. In the cloud, Atlassian can do three or four upgrades daily with no interruption in services. And hardware infrastructure doesn't create reliability problems, Tria says.

Atlassian went to a microservices-based architecture, running Docker container management, Lambda serverless computing, Kinesis data streaming and load balancing. The services run in multiple regions, with "chaos monkey" reliability tests taking down parts of the infrastructure intentionally to ensure that the services as a whole can withstand component failures.

Atlassian got a couple of surprises in the transition, both good and bad. Transitioning Jira search provide trickier than foreseen. Search is one of the most popular features of Jira, and customers have built their own, complex queries that they relied on. Previously, the service used an Apache Lucene search engine, but it has transitioned to a PostgreSQL database. That provided inconsistent search results. The solution was to run searches on both tools in parallel and compare them until search results were the same. That process took several months.

On the positive side, performance was better than anticipated. Particularly for small customers, on the old architecture, new services took a while to come online, and the process is much faster on AWS.

Atlassian has a 2,000-user limit on its services, and the company is taking advantage of the AWS architecture to make a priority out of removing that ceiling, Tria says.

Atlassian benefited from more efficient use of its data centers as a result of the migration. Prior to the migration, Jira and Confluence were running in Atlassian's own data centers in the US. Atlassian expects to see depreciation on unused equipment due to the cloud migration through this month.

However, the extent of that depreciation is unclear. "We did not shut down any data centers as a result of the migration. We were able to reduce some of the square footage used. However, it's hard to estimate the exact numbers since we use the data centers for multiple things outside of hosting our cloud products," Tria says.

Atlassian is currently looking to broaden its platform to multi-cloud. It's built on Kubernetes, which puts a layer between the application and infrastructure, making applications portable. "That will open the door for us to experiment and play with other cloud providers," Tria says. Atlassian is looking to use its container-based, microservices architecture to take advantage of specialized services available on cloud providers other than AWS.