Billing itself as the first cable operator to field-test the industry's evolving "10G" platform, Mediacom Communications has teamed with a group of industry and tech partners to demonstrate the latest in hybrid fiber/coax (HFC) network technologies and an array of bandwidth-intensive apps, including 8K video and a light field display.

The demo centers on a Mediacom-owned "10G Smart Home" in Ames, Iowa, connected to an enhanced DOCSIS 3.1 network that's been upgraded to 1.2GHz (from 860MHz), along with a "high-split" upgrade that increased the spectrum dedicated to the upstream from a range of 5MHz-45MHz to a range of 5MHz-204MHz. 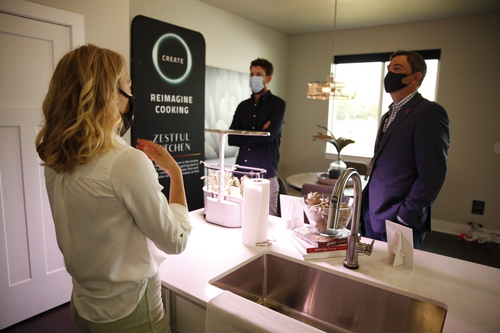 Zestful Kitchen is one of the partners showing off their wares in Mediacom's 10G Smart Home.

According to Mediacom CTO JR Walden, the updated segment of the network in Ames connecting the 10G Smart Home  encompassing four network nodes  has also implemented a node+0" architecture. That means there are zero amplifiers between the home and the node (the rest of Mediacom's HFC network in Ames carries a node+2 average node density).

With a nod to cable's new distributed access architecture (DAA), the updated portion of the HFC network also features new remote PHY devices (RPDs) from both CommScope and Casa Systems. Additionally, this piece of the network is also running OFDM/OFDMA subcarrier channels (the new channel scheme for DOCSIS 3.1 and DOCSIS 4.0) almost exclusively, save for a couple of single-channel upstream and downstream QAM channels to support a few DOCSIS 3.0 modems still on this part of the Mediacom network in Ames. Mediacom has cleared out more room by eliminating QAM video channels and instead running video services entirely on IP, thanks in part to the use of hybrid IP/QAM boxes from TiVo.

Walden estimates that the setup enables the network to deliver about 5 Gbit/s downstream and 1.2 Gbit/s upstream to the back of the modem (a DOCSIS 3.1 model, in this case) outfitted with a 2.5 Gbit/s port. Today's D3.1 modems can't process more than 5 Gbit/s, but next-gen DOCSIS 4.0 modems will be able to do more.

The path to 10G
The industry's 10G initiative is targeting symmetrical speeds up to 10 Gbit/s alongside super-low latencies and improved security over multiple types of access networks, including HFC, fiber-to-the-premises and even wireless.

But 10G is also an evolutionary project. Last year, CableLabs CTO and SVP Belal Hamzeh presented a graphic showing that the path to 10G is actually comprised of three generational phases. Achieving speeds up to 5 Gbit/s  what's being demonstrated this week  represents an element of the second step along that path: 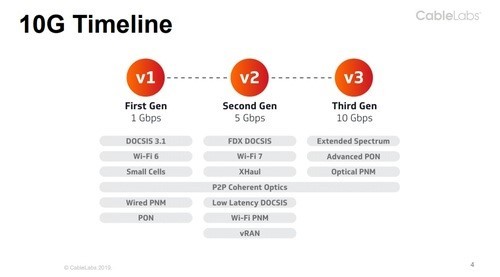 Walden said Mediacom looked at some other approaches that could push the bitrate numbers higher in the home. But he said it was important to show off the capabilities of the HFC network using real-world products rather than prototypes and other tech that might not yet be ready for prime time.

"We didn't want to have a Frankenstein-kind of thing in the house; we wanted something that looks like a modem," he said. He noted that Mediacom is also using the enhanced segment of the network in Ames to deliver symmetrical 1-Gig service to customers who have DOCSIS 3.1 modems.

"Right now, everything that's in the network delivery is GA [general availability] product, even the code," he said. "This is supporting real, live customers."

Light fields, 8K video and more
Network setups aside, the greater purpose behind the 10G Smart Home, being shown off by Mediacom today in partnership with CableLabs and NCTA  The Internet & Television Association, is to demonstrate why fatter pipes and faster speeds will be needed down the road as consumers connect more and more devices to the home, including certain apps that will chew up a lot of bits.

One such voracious bandwidth eater on the horizon  the light field display  is a key example.

CableLabs is running that contained demo using a light field display from Looking Glass Factory (equivalent to a 32-inch monitor, in this instance) showing a range of 3D/holographic still images and some video of a martial arts demonstration. 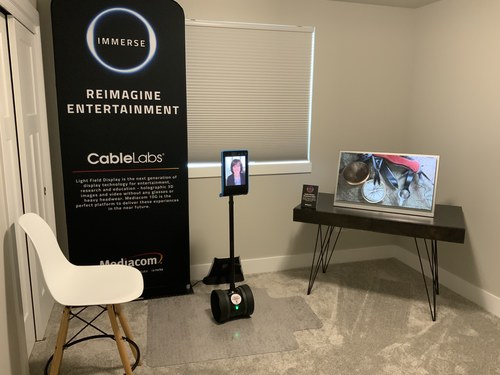 "It's compelling with both still imagery as well as moving video," said Debbie Fitzgerald, director of immersive media experiences at CableLabs, who is running the demo remotely. "As you shift your head around, you do see different specular reflections and shadows change which is what makes it look very 3D-like."

Here's a short video from Looking Glass Factory that offers a glimpse of a technology that uses an array of light rays from cameras at multiple viewpoints to create volumetric images and video.

Illustrative of the kind of app or service that will consume the kinds of speeds delivered by these next-gen networks, the light field display demo (which requires no special headsets or goggles, by the way) would need about 500 Mbit/s to 600 Mbit/s of throughput, she said.

However, more advanced versions of the technology that emit multiple light rays at every pixel point could consume about 1.5 Gbit/s, Fitzgerald estimates. She expects light field display technology to follow a quality path similar to what was seen with television, as it evolved from black-and-white, to standard-def color, to HD and then on to 4K and, soon, 8K.

"Along those same lines, we're also looking at how we can compress this data and characterize it so we can deliver it in the highest fidelity possible down to the display," Fitzgerald said.

Beyond technology demos, CableLabs has some direct involvement with the development of light field displays and holographic technology  the organization (along with Charter Communications) is among a handful of founding members of the Immersive Digital Experiences Alliance (IDEA).

"We stood this [Alliance] up last year to help pull together players in the ecosystem and to accelerate the ecosystem to bring really true holographic experiences into everyone's living room," Fitzgerald said.

For many who are getting today's tour, the Looking Glass demo will be the one that is "shockingly high tech," he predicted. "It's way more than just seeing 3D without glasses."

Fitzgerald's show of the Looking Glass Factory display is just one of dozens of other demos on hand – Mediacom estimates its 10G Smart Home is currently equipped with more than 70 Internet-enabled devices.

Another big bandwidth example is an 8K demo featuring footage shot by Mystery Box in 8K and 60 frames per second streamed over a Vecima Networks content delivery network server to a Samsung QLED Smart 8K set.

Walden jokingly likened the 10G Home demo to "a mini CES that's a lot easier as your feet  almost as many cool things but about four miles less walking."