As the cable industry pushes toward multi-gigabit speeds, performance delivered inside the home will become just as important as what is delivered to the home.

That emerging requirement is the primary focus of a new open source project at CableLabs called "Dual Channel WiFi" that has the ability to allocate dedicated channels for specific applications or traffic types that require lots of bandwidth or super-low latencies, such as streaming video, online gaming and virtual reality and augmented reality services.

Dual Channel WiFi's general aim is to create a stronger, better connection between the user and the WiFi access points in the home, Belal Hamzeh, CableLabs SVP and CTO, explained in a media briefing about the project.

Instead of having all upstream and downstream traffic flow over one channel, the Dual Channel WiFi approach sets up one or more adjacent, downstream-only channels that can be configured to support certain, defined traffic types and applications such as OTT video. That new degree of intelligence, Hamzeh explained, can be applied to the WiFi access point, which can then filter and reroute packets to secondary channels according to metrics defined by the service provider.

CableLabs believes the result will reduce congestion on WiFi channels and free up capacity for other devices that aren't connecting to these secondary channels.

Hamzeh said Dual Channel WiFi aims to improve on overall WiFi performance as well as customer satisfaction while reducing WiFi-related service calls -- CableLabs estimates that at least 15% of customer calls to the operator are due to WiFi issues or perceived WiFi issues, equating to a cost of about $600 million for North American cable operators alone.

Channel allocations for downstream data can be crafted to serve any WiFi-connected device, including tablets, laptops, smartphones and a new class of wireless set-top boxes (by way of example, Comcast's Xi5 and Xi6 video clients for its X1 platform use WiFi rather than a wired MoCA connection to connect to the home gateway), Hamzeh said.

Via the new open source project, consumers will be able to "experience video over a wireless connection the same way [they] can experience it over a wired connection," he said.

Keying on 2020
Hamzeh said 2020 would be a "reasonable timeframe" to see implementations of the Dual Channel WiFi reach the product ecosystem, noting that the expectation is that existing WiFi access points will be able to support this new capability with a software upgrade. By making it open source, the aim is to provide this to all types of service providers and suppliers.

"We are opening up to the general ecosystem... cable or anybody in the WiFi ecosystem," he said, adding that CableLabs is likewise engaged with organizations such as the Wireless Broadband Alliance and The Wi-Fi Alliance with respect to its Dual Channel WiFi work.

Citing recent testing data, CableLabs said the Dual Channel WiFi approach saw data transfer speeds increase by as much as 12 times while also seeing airtime efficiency (reducing the need for retransmissions) increase by 50%, though results depended on application download speeds. CableLabs said Dual Channel WiFi is compatible with all WiFi releases, including the newest one, WiFi 6.

CableLabs has developed Dual Channel WiFi open source code for the Reference Design Kit (RDK), the preintegrated software stack for set-tops and gateways that's managed by a joint venture of Comcast, Liberty Global and Charter Communications. That work involves the two primary flavors of the Reference Design Kit -- RDK-B (for broadband gateways) and for RDK-V (for set-top boxes and other video devices). CableLabs is also collaborating with a startup called Edgewater Wireless to develop the Dual Channel WiFi implementation for OpenWRT platforms.

Can Edgewater gain an edge in next-gen WiFi?
Ottawa, Canada-based Edgewater Wireless has other linkages to CableLabs, as it was part of the 2016 cohort for the organization's first-ever UpRamp "Fiterator" startup accelerator program.

"This is revolutionary, game-changing stuff that takes WiFi to the next level," he claimed.

Edgewater Wireless's technology and multi-channel architecture focuses on WiFi in high-density environments. Those efforts started in the enterprise and public venue arena, but have likewise shifted to the home as the number of devices hanging off of home WiFi networks soars.

"Whether it's in a 5G world or a WiFi-only world, the density problem is very, very real," Skafel said.

A big challenge ahead for WiFi, he said, is how the platform handles a multitude IoT devices that are coming online in homes. Those IoT devices don't use lots of bandwidth but are a potential source of interference that should avoid running on the same channel that's being used, for example, to stream video to the TV.

Edgewater Wireless, a company that tries to apply management capabilities to otherwise unmanaged spectrum, has a business with three areas of focus -- patents and licensing; supplying chipsets and radio cards (it makes its own chipsets); and access points (it sells its own under the "Aera" brand and develops reference designs for third-party partners). One of its initial deployment partners is Kroger Co. -- the grocer is using Edgewater-made access points for its new connected shopping experience/platform.

The 10G connection
CableLabs's Hamzeh said the Dual WiFi work has some direct benefits and links to the cable industry's 10G initiative, whose goal is to deliver symmetrical speeds of up to 10 Gbit/s to the home using a variety of access network technologies, including DOCSIS/HFC, FTTP and wireless.

While 10G is focused on the connectivity to the home, consumers in the home tend to use WiFi as their primary method to connect, he pointed out.

As new generations of WiFi will fit into the 10G, Hamzeh also presented an updated roadmap/timeline for the project as it continues to add speeds and capabilities along that path.

DOCSIS 3.1, now widely deployed, is considered 10G version 1 in this timeline, with future versions (10Gv2 and 10Gv3) set to implement Full Duplex DOCSIS, low-latency capabilities, as well the use of capacity at much higher frequencies in the spectrum than is used today.

Here's how that timeline is presently stacking up: 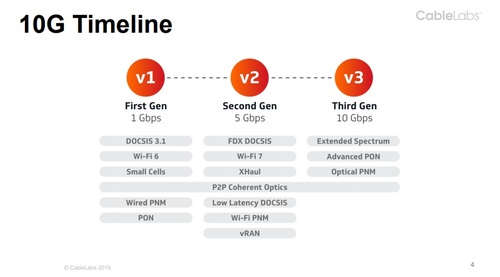