Cable Gets Behind Emerging Holodeck Tech

As residential broadband speeds climb past 1 Gbit/s to symmetrical 10-Gig, the next question is what apps and services could conceivably require such massive data capacities.

One possibility involves holographic and volumetric video and light field displays. It's early days for this media category, but it's already clear that low latencies and huge bit rates will be required to render those images, even when compressed.

Speaking at Light Reading's Cable Next-Gen Technologies event in March, CableLabs CEO Phil McKinney offered an update on the industry's "10G" initiative while also referencing how that effort could could be used to pipe in new, bandwidth-intensive forms of holographic video on the horizon. By way of example, he said connecting two 60-inch light field, volumetric displays for a video conferencing app would require up to 900 Mbit/s of "sustained speed."

If holographic video and light field displays are indeed part of the future, the cable industry is already prepping for it, as CableLabs, Charter Communications and Cox Communications are among the parties involved in a newly formed organization called the Immersive Digital Experiences Alliance (IDEA).

Introduced at the NAB show in Las Vegas in April, IDEA is developing a suite of "display-agnostic," royalty-free specifications that include a new media format capable of supporting a new wave of immersive media, including holographic video. This new media format will enable video to be rendered on traditional flat, 2D displays, head-mounted displays, as well as a new class of volumetric and light field displays that can beam out images in their fully formed holographic glory. 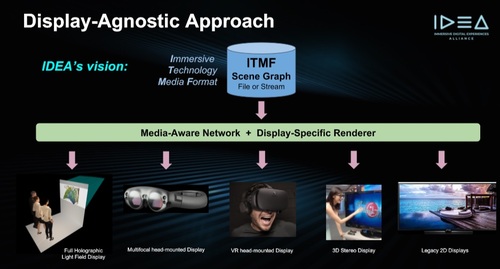 Forging the missing link
Early versions of light field camera arrays that can capture holographic images, along with displays that can render those images, have been developed and are continuing to be refined. But a common video format is the missing piece, explains Arianne Hinds, the chair of IDEA and a principal architect and futurist at CableLabs.

"It's not a 2D video stream anymore," says Hinds, a former software engineer at IBM who today also serves as the US chair of the US delegation of The Moving Pictures Experts Group (MPEG).

Prior to forming IDEA, established as a not-for-profit 501c6 organization, CableLabs had begun to work with fellow group member OTOY on a spec that centers on a media format developed by OTOY, a real-time 3D graphics specialist that has already built tools that have been adopted by some major studios and programmers such as HBO.

The vision for IDEA is to refine this new media format and enable it to be ingested and supported by newer holographic displays that don't require the viewer to wear special glasses to enjoy the full effect. The images would also be viewable in flat format on traditional, 2D displays.

"If you think about a hologram being the visual information for the real image 3D scene without glasses... you still have sufficient information to reproduce the same image on a 2D panel," Hinds said. "This gives us a way to get away from how to repurpose 2D video technologies to drive these new advanced displays. The hologram is a super-set of everything you'd need to drive any display."

IDEA intends to also write network APIs that enable the system to query the display to discover its capabilities (is it a 2D display or a more capable holographic display?), become aware of the network conditions (is the connection fast enough for the full holographic image?), and then deliver the "right" content to the display and the viewer.

Crawl, walk, run
IDEA's scope of work might seem daunting. "It's not all doable by next year," Hinds acknowledged. "We'll do the crawl, walk, run approach."

But the plan in 2019 is to finish the royalty-free, open source spec for what's being called the Immersive Technologies Media Format, IMTF, which is being developed with help from OTOY and written by CableLabs. From there, IDEA expects to modify and produce subsequent versions of the spec that make it suitable for a "media-aware network," Hinds said.

IDEA is still gathering assistance and seeing more backers. In addition to CableLabs, OTOY and Charter, other founding members of IDEA are Light Field Lab and Visby. IDEA is not limited to cable from a service provider standpoint. Some "big name studios" are set to join IDEA's cause, and the group is also looking to get TV makers involved, Hinds said.

"It's so new that it takes some time to digest and really understand it... but there's a lot of interest," she said. IDEA is planning to put together an educational seminar this summer at a date and location in Los Angeles to be announced.

The holographic display is so new that it's likely that most people have yet to encounter one. But perhaps it's helpful, at a conceptual level, to summon up the scene in Star Wars when R2-D2 projects a holographic image of Princess Leia making her plea to Obi-Wan Kenobi to join the Rebel's cause.

"It's a little bit like that," Hinds said. "But there were a lot of laws of physics that were broken in that particular scene," she adds with a laugh.

Citing an example of a holographic display she's had an opportunity to see, Hinds said the device projects a holographic image in front of what looks like a regular TV panel. Though the image created was relatively small -- about four inches by six inches -- the result was "amazing," she said.

A recent "The Near Future" video from CableLabs shows some examples of what an advanced light field display would be capable of.

A major distinction is that special glasses aren't needed to see the holographic image. "That's a big deal," Hinds said.

The need for special glasses was a killer for 3D-TV. Hinds said similar requirements for augmented reality products from companies like Magic Leap and Microsoft (with the HoloLens) are likely to be a "hard sell" to consumers. The idea that IDEA has in mind removes some of those barriers while also driving toward common tools that can spark the development and cultivation of content for this new media format, she said.

But the new media format and full-rendered holographic images will require gobs of data. Hinds said the first consumer-facing light field display, in the neighborhood of 85 inches, requires about 1.5 Gbit/s in a compressed format.