When will cable need 10G?

NEW ORLEANS -- SCTE/ISBE Cable-Tec Expo -- Ever since "10G" became an official part of the cable industry's lexicon in January, a vexing question has been: When will the access network even require speeds of 10 Gbit/s or more?

Almost ten months later, there are still no concrete answers, but there are some ideas about the when as well as what applications might need such capacities.

Speaking here at a pre-conference event focused on 10G, Tom Cloonan, the CommScope CTO team's chief technologist for network solutions, acknowledged that he doesn't know precisely when such capacities will be needed, but estimated that current models indicate the need for 10 Gbit/s could come as early as 2029, but sees MSOs requiring "at least" 10Gbit/s capabilities on the access network by 2035. 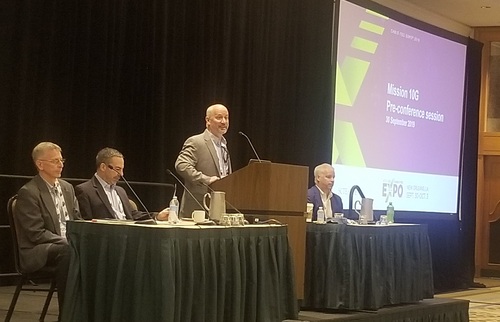 SCTE's Chris Bastian (at the lectern) welcomes the crowd to a pre-conference session on 10G. Joining him (left to right) are Tom Cloonan, CommScope; Bob Ferriera, Intel; and Brian Scriber, CableLabs.

That estimate, if accurate, means that 10G won't happen overnight as operators and their suppliers figure out how to enable such speeds over multiple access network types, including hybrid fiber/coax (HFC), fiber-to-the-premises (FTTP) as well as wireless.

Cloonan also put forth some ideas on how much HFC bandwidth will be required for the 10G era. For 10 Gbit/s in the downstream, about 1.3GHz of spectrum will be needed, and about twice that will be required for symmetrical 10-Gig. When service level agreements are factored in, Cloonan believes that about 3.6GHz of total spectrum will be needed. On the HFC side of the 10G equation, the good news is that taking spectrum above the 3GHz ceiling is what's being considered for DOCSIS 4.0, a new spec underway at CableLabs.

The other question is what apps will need 10G, including many that probably haven't been invented yet. Some examples already in the field of view include virtual reality and augmented reality services that might need 600 Mbit/s per stream for a "retinal immersive experience level," as well as light field displays that could eat up 800 Mbit/s per stream on an uncompressed basis, Cloonan said.

Beyond speeds and feeds
The billboard speeds envisioned by the cable industry's 10G initiative gets most of the attention, but panelists here also explored other key enhancements that are being built into it, including low latency, security and reliability.

Building low-latency capabilities into 10G is "critical" and just as important as speed, Bob Ferriera, general manager, strategy and technology for Intel's Connected Home unit, said, noting that AR/VR, cloud gaming and light field displays will need both of those pieces.

Low latency is an area of focus of DOCSIS 4.0. Ferriera noted that five interop sessions focused on low latency are planned from September 2019 to June 2020, with field trials expected to start by mid-2020 with an initial focus on online gaming.

Intel has been doing work ahead of that in its gaming lab being used for some "simplified" low-latency DOCSIS features, including multiservice flows (including a queue for the gaming traffic) and proactive granting of network resources. When that simplified set of low-latency features were applied, the multiplayer game (Intel's testing has focused on a title called The Unspoken) could support guaranteed sub-10 millisecond latencies across a highly contested network, Ferriera said.

10G is also applying a greater focus on security, spanning areas such as customer privacy, confidentiality and upholding the integrity of messages and other data.

"The reality of 10G [is] it has to be about all of those," Brian Scriber, distinguished technologist and VP of security technologies at CableLabs, said. He noted that service providers are facing both perpetual internal and external threats to their networks and that the advanced speed and latency capabilities of a 10G-enabled network will likewise make them a coveted target of pirates and others who are trying to compromise that network.

Another leg of the stool of the 10G network is increased network reliability. Those future services that need more capacity and lower latencies "will have much greater demand on our networks," CableLabs fellow Alberto Campos, said. Reliability, he added, "is the art of avoiding failure."