Brits and Germans have much in common. The English language, for starters, has Germanic roots. So does a large "Anglo-Saxon" chunk of the UK population. And while those hot-tempered southern Europeans favor wine as a tipple, the no-nonsense Brits and Germans can bond over their love of beer, and their ability to guzzle copious amounts in a single sitting.

They are also cursed with some of the lousiest broadband in Europe. Data published by the FTTH Council Europe in September last year ranked the UK the worst of 33 countries on the take-up of full-fiber services. Germany did little better in the 29th spot. But while there are signs the UK may start to haul itself up the ladder, Germany is still teetering on the bottom rungs like a sozzled east European builder. 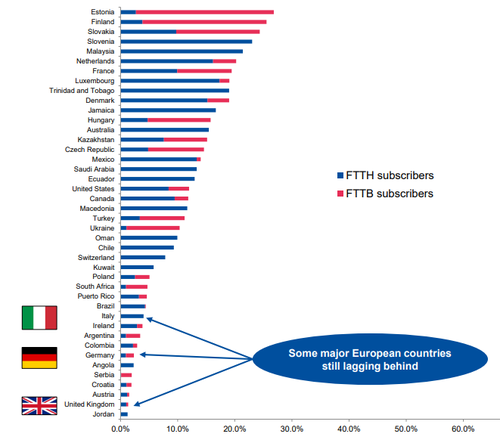 The chief villains are the countries' linked incumbents: The UK's BT today counts its biggest individual shareholder, with a 12% stake, as Germany's Deutsche Telekom. Historically, both players have been reluctant to spend money on a full-fiber upgrade of their ageing copper lines. Egged on by Boris Johnson, the UK's ambitious new prime minister, and goaded by smaller rivals building full-fiber networks, BT has upped its fiber commitments and promised even more if "investment conditions" are good. Under far less pressure, Germany's Deutsche Telekom is still mainly plugging away at technologies that supercharge its last-mile copper connections.

But another UK company could be the catalyst for a strategic change. Vodafone, which sells mobile and broadband services in Germany, recently bought Unitymedia, a major cable operator previously owned by Liberty Global, after regulators eventually signed off the deal with conditions. Combining Unitymedia's network with Vodafone's cable assets is like fitting together two large finished sections of the German cable jigsaw. And Vodafone's plans for that network may force Deutsche Telekom to rethink its broadband approach.

By taking advantage of a cable technology called DOCSIS 3.1, Vodafone reckons it will be able to market a high-speed "gigabit" service to as many as 25 million German homes by the end of 2022. If speed matters to German customers, this gigabit footprint could be a huge commercial advantage. Supervectoring, a copper-based technology that is Deutsche Telekom's focus, runs out of juice at about 250 Mbit/s.

The dilemma is hard for shareholders to ignore. In the last decade, Deutsche Telekom's share of Germany's broadband market has fallen from 47% to 39%, according to the operator's own statistics. Over that period, cable has accounted for more than 60% of the growth in broadband lines. At the end of 2009, just 2.2 million broadband connections were delivered over cable infrastructure. By December last year, that figure had soared to 8.2 million. Even before Vodafone's 18.4 billion ($20.6 billion) takeover, cable competition was hurting Deutsche Telekom. 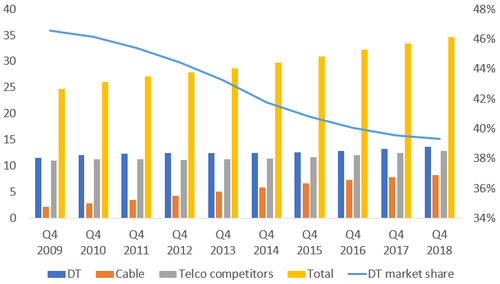 So far, however, there has been no talk of revisiting those full-fiber rollout targets. And a "fiber for all" policy that mirrors that of Boris Johnson -- who wants the entire UK to have full-fiber networks by 2025 -- would be an even bigger challenge in Germany. Many of its households are single-dwelling units found some distance from local street cabinets, driving up the cost of fiber deployment. Providing full-fiber connections to every German property would cost between 60 billion ($67 billion) and 80 billion ($90 billion), Deutsche Telekom has previously estimated.

Nor is Germany's biggest operator in a strong position to fund such a huge project. In the US, its plans to acquire and merge Sprint with T-Mobile have generated uncertainty about future dividend payments to shareholders. Net debt increased by 3.8 billion ($4.3 billion) in the last quarter, to 75.7 billion ($84.9 billion), because of dividend payments, tower leases and spectrum costs. That figure is 2.74 times what Deutsche Telekom makes annually in adjusted earnings (before interest, tax, depreciation and amortization) and puts it next to its "comfort zone ratio" upper limit of 2.25-2.75. Sales are rising, thanks largely to the US performance, but capital expenditure in Germany is already at a record high. Even when spectrum fees are stripped out, it has ticked up from 15% of sales in 2013 to around 20% last year. 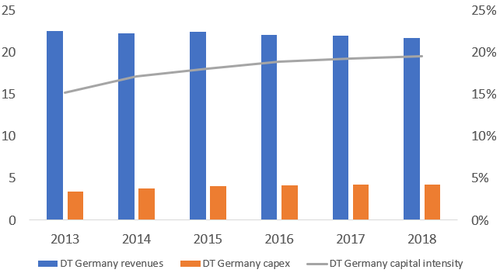 Executives may hope Vodafone's Read is all mouth and no trousers, to use a British expression. While more straightforward than a full-fiber deployment, a gigabit upgrade of cable systems for 25 million homes will not be easy to pull off. Deutsche Telekom has also cast doubt over the value of cable as a "future-proof" technology: Cable subscribers must share bandwidth, it has previously noted, whereas old-fashioned DSL offers dedicated connectivity per customer. "I am assuming that policymakers are expecting Vodafone and Liberty to not only upgrade their old network with coax but also invest in FTTH [fiber-to-the-home]," said Timotheus Höttges, Deutsche Telekom's CEO, during a phone call with reporters last week.