BARCELONA -- MWC19 -- Countries that introduce a post-development 5G testing regime to address concerns about network security would run the risk of being far less competitive as 5G services move into industrial markets, according to Börje Ekholm, the CEO of Swedish equipment giant Ericsson.

Speaking to analysts and reporters at today's Mobile World Congress tradeshow in Barcelona, Ekholm ramped up Ericsson's criticism of plans that were recently announced by the GSM Association, the organizer of the MWC event, for a pan-European 5G testing regime in response to growing concern about vulnerabilities in network equipment.

The GSMA plans were announced earlier this month after several countries had imposed restrictions on Huawei and ZTE, out of concern Chinese authorities could seek to exploit spyware in their network products, and as other countries consider bans. 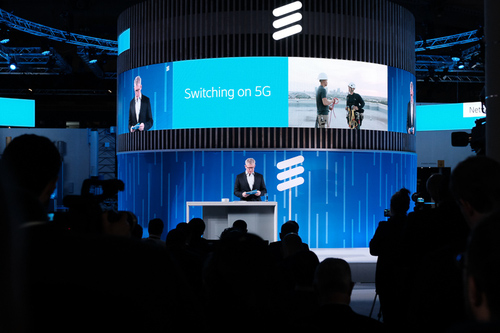 Ericsson executives had already criticized the GSMA plans at a recent press event in London, arguing they would hinder innovation and be impractical because of the need to carry out software testing as products are being developed.

But Ekholm went much further in Barcelona, saying any test regime would be a "tax burden" on the industry that would potentially damage the competitiveness of national economies.

Ekholm justified his position by arguing that post-development testing would test only a "limited representation of the network" and that it would create a "false sense of security" by overlooking factors such as network design, configuration, and operational procedures -- none of which are baked into the actual 5G standard.

Pointing out that modern software is deployed on a rolling, continuous basis, Ericsson's boss said he was also worried that plans would hinder innovation and drive up costs for end customers.

The concern is even greater when it comes to the enterprise segment of the market because of the additional features that may go into 5G networks targeting industrial customers as opposed to consumers. "There will be more features deployed in the network as we move into the enterprise segment and post-development testing will slow this down," he said. "Countries run the risk of being less competitive."

Ericsson is lobbying the GSMA to scrap its proposal, but it currently remains unclear whether other associations, regulatory bodies or national security authorities are considering similar plans.

Asked by Light Reading if he thought a post-development testing regime would get imposed on the industry, Ekholm said: "There are many discussions ongoing on testing, and we don't see it as a silver bullet, and we want to be clear early on that it runs the risk of slowing down the industry."

The remarks show how the security backlash against Ericsson's Chinese rivals could have negative consequences for all equipment vendors, despite investor hopes that Ericsson and Finland's Nokia stand to profit from the misfortunes of Huawei and ZTE.

Ekholm has previously said the geopolitical climate has led to uncertainty for customers planning investment in next-generation network technologies.

There is concern in the industry about the ability of Ericsson and Nokia to handle swap-outs of Huawei equipment in Europe should regulators decide to ban the Chinese firms. One major mobile service provider that did not want to be named told Light Reading it is not persuaded Ericsson has the products, stock and resources to replace Huawei.

Naturally, both Ericsson and Nokia have rejected the criticism. "It is a very hypothetical question, and we must let governments decide what to do," said Ekholm today when asked by one analyst if swap-outs in Europe could delay the rollout of 5G technology. "We are preparing the supply chain to deliver 4G and 5G products at a high pace.

"We are well prepared for 5G," said Ekholm during his presentation. "We have the capacity, the resources and the supply chain geared up for fast deployment and rollout of 5G. We have a complete and flexible 5G portfolio."