Apple TV+ bulks up by bundling

Add Apple TV+ to that list, as the relatively new streaming service has given bundling the nod by enabling its subscribers to tack on two premium offerings  CBS All Access and Showtime  for a 52% discount versus the price when those services are bought on a standalone basis. 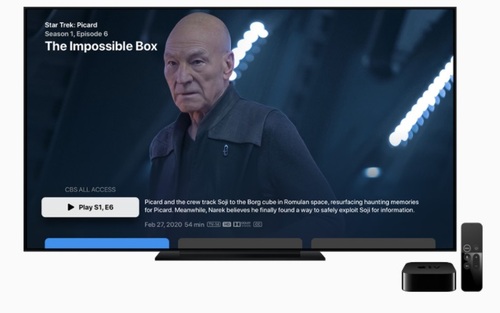 Bundling CBS All Access will give Apple TV+ users easier (and discounted) access to ViacomCBS original series such as Star Trek: Picard.
(Source: Apple and ViacomCBS)

Under the terms of an offer limited to the US, subscribers to Apple TV+ (a service that launched last November and costs $4.99 per month) can add the commercial-free form of CBS All Access and Showtime for $9.99 per month following a seven-day free trial. Apple's Family Sharing feature allows up to six household members to share subscriptions to Apple TV+, CBS All Access and Showtime.

Bundle drivers
In addition to drawing more users to the Apple TV app (an app that aggregates access to a large cross-section of streaming services), the new bundle also addresses a primary criticism of Apple TV+ – its relatively small library of content. The lack of a large library has contributed to ho-hum usage  in a recent analysis from HarrisX and MoffettNathanson, Apple TV+ usage languished at just 7% in June 2020, about the same usage level the service was seeing in March 2020.

The discounted bundling deal also gives ViacomCBS more direct exposure to Apple users and the Apple ecosystem as the media giant looks to broaden its streaming efforts as the US pay-TV market continues to decline. ViacomCBS, which also distributes Showtime and CBS All Access via the Amazon Prime Video Channels platform, ended the second quarter with 16.2 million streaming subscribers, up 74% year-over-year.

The bundling arrangement might also pave the way for Apple TV+ to strike up a similar agreement involving a broader, "super" streaming service from ViacomCBS that will succeed CBS All Access and launch in early 2021 under a new brand name.

While the new Apple TV+, Disney+, NBCU's Peacock and WarnerMedia's HBO Max streaming services all support à la carte models in which consumers self-bundle, most of them are complementing their reach and availability through bundles and distribution partnerships.

Disney, for example, offers a bundle of Disney+, Hulu (the ad-supported SVoD version) and ESPN+ for $12.99 a month, and just this week forged a deal to have its streaming services woven into Verizon's new 5G "Mix & Match" plans. In addition to selling their respective streaming services on a standalone basis, NBCU's Peacock and WarnerMedia's HBO Max will remain heavily reliant on pay-TV distribution partnerships to quickly ramp up their subscriber bases.

Additionally, all streaming services are grappling with so-called "subscription fatigue," even as consumers increasingly leave traditional pay-TV packages and bulk up on SVoD offerings.

Still, the ceiling on how many SVoD services consumers will pay for seems to be rising. According to a new forecast from Ampere Analysis, the average US home could end up taking as many as eight SVoD services if they are used to completely replace traditional pay-TV.