BROOKLYN, NY -- Samsung is launching the new Note10+ 5G initially with Verizon on its 28GHz millimeter-wave network, and the nation's other big carriers are now crowing about the latest Samsung 5G device arriving on their networks later this year. 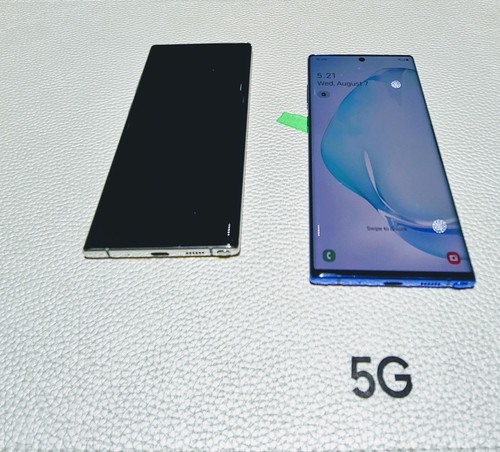 Samsung says the initial millimeter wave 5G version of the new Note will use the Qualcomm Snapdragon x50 modem.

Rivals were keen to chime in about the Samsung Note10+ 5G on Wednesday:

"Following the recent progress in making our first data transfer over a low-band 5G network (sub-6), were continuing to work with Samsung to introduce the Samsung Galaxy Note10+ 5G by the end of the year," an AT&T spokeswoman said.

T-Mobile says it will launch a version of the Note10+ 5G in the fourth quarter this year. "Our exclusive version of the Galaxy Note10+ 5G that will tap into both low and mid-band 5G spectrum will break 5G from the confines of urban centers and help unlock 5G for all with the New T-Mobile," said T-Mobile CEO John Legere in a statement Wednesday. This version appears to support both T-Mobiles 600MHz frequency and Sprints 2.5GHz band, as the two operators pull closer to completing their $26.5 billion merger.

Sprint will also have access to a 5G version. "Sprint will launch Galaxy Note10+ 5G at a later date for customers looking to connect to its next-generation True Mobile 5G network," the carrier said in a statement.

We can expect AT&T, T-Mobile and Verizon to have a Note10+ 5G out by the end of the year. The Note10+ will be amongst the first low-band 5G devices available and should roll onto the first national 5G networks in the US.

In the meantime, Samsung unveiled the 4G Note10+, as well as the smaller 4G Note10, in rainy downtown Brooklyn at the Barclays Center stadium Wednesday afternoon.

At its launch event, Samsung announced what Microsoft's CEO Satya Nadella called a "multi-device, multi-sense" deal with Microsoft. At the moment, this means that Note10 users can view and reply to text messages from their device on their Microsoft Outlook desktop email.