Orange is calling on operators worldwide to agree to a baseline set of telco cloud requirements for NFV infrastructure (NFVi), orchestration and automation that vendors can use to develop products that can be universally deployed.

And according to Emmanuel Lugagne Delpon, the director of Orange Lab Networks, a base of specifications that can be built upon already exists in two Linux Foundation Networking (LFN) working groups, Open Network Automation Platform (ONAP) and Open Platform for NFV Project Inc. (OPNFV).

The rallying cry is being made in tandem with Vodafone Group plc (NYSE: VOD), which is also pressing for unanimity based on ONAP and OPNFV: Vodafone's head of Network Virtualisation, Cloud and Automation, Fran Heeran, has already laid out his vision of what needs to be achieved and is also pushing the case for those two open source initiatives to be the foundations of operator unity. (See Vodafone's Heeran: Defining the Telco Cloud.)

And if this all sounds like the call for an industry standard, well it is... yet it isn't. Orange (NYSE: FTE) and Vodafone want operators to have an agreed set of specifications and guidelines they can provide to developers but they don't want to engage in a traditional standards process for the telco cloud that takes years to detail and specify -- instead they want all operators to get behind and specify the same open source initiatives and build industry consensus that way.

During a keynote presentation at last week's Open Networking Summit 2018 in Amsterdam, Delpon told attendees that virtualization and disaggregation, along with automation and open interfaces, will be the bedrocks of 5G networks and will be essential to deliver the full potential of 5G. (Light Reading agrees with that -- see Piecing Together the 5G Big Picture.)

But the industry isn't delivering a uniform approach to meet those requirements, he argued: "If not managed well, disaggregation will put the telco ecosystem at risk... Today there are too many configurations, parameters and elements proposed by the vendors," stated Delpon. "There is no single standard for NFVi or orchestration... the consequence of that is that the operators have to engage in more integration, so there are extra costs," he added.

The industry is fragmented, just like it was in the very early days of mobile, and this is bad for everyone. But the industry came together then to develop the GSM standard to counter that fragmentation: Something similar is needed now but in a way that's more suited to an industry that incorporates open source developments.

The industry needs to adopt a global "standard" for virtualization to gain the benefits of bringing IT systems into telecom networks -- "If we fail collectively to create a standard, I believe we will have an industrial disaster," he stated. 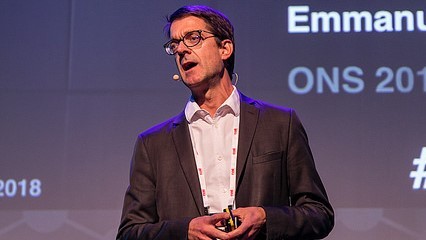 Emmanuel Lugagne Delpon: "If we fail collectively to create a standard, I believe we will have an industrial disaster."

It should be noted that his use of the word "standard" did cause concern among other operators at the event, but Delpon went on to note that while "the right place for 5G standards is the 3GPP," the global community of 900 or so operators should all adopt the same key building blocks to develop their telco cloud infrastructure and those building blocks should be, at the minimum, ONAP and OPNFV.

(It was notable, though, that his slide promoting ONAP and OPNFV also referenced the Open Compute Project and O-RAN Alliance as initiatives that Orange expects to play a role in creating operator consensus: See The Future's Bright, the Future's ORAN.)

"This is a call for action. Open source communities are the right place to do this job. We are heavily invested in OPNFV... We need a more standardized, telco-grade NFVi to get the full benefits of virtualization without losing the scale we have enjoyed from traditional standards... We need the right orchestration layer -- we can't have different orchestrators [deployed by different operators] and be doing integration work. That is not viable. We believe ONAP is the right orchestrator [and the way to] standardize APIs for orchestration," added Delpon, who urged all operators to join ONAP.

And as is to set an example, Delpon says Orange is already referencing ONAP interfaces in its requests for proposal (RFPs), something that at least one other Orange exec has mentioned previously: Vodafone is also doing the same with its requests for information (RFIs). (See Orange Plans '5G Plus Automation' RFP This Year and Vodafone's Heeran: Defining the Telco Cloud.)

In an effort to create consensus, Orange and Vodafone have been promoting the idea of rallying around ONAP and OPNFV to the GSM Association (GSMA) , which represents more than 750 network operators.

Driving the open source vehicles
The suggestion that all operators might flock around a small number of open source initiatives is a bold one, especially as ONAP, for example, is not supported by all major telcos -- Telefonica, which is trying to attract support for the alternative open source orchestration platform initiative OSM, is the most notable exception -- and is still immature. Delpon notes that this is a long-term play and not something that will happen overnight.

And is OPNFV the best initiative around which to develop consensus for NFVi? In a conversation with Light Reading in Amsterdam, Delpon said believes there is momentum already around OPNFV and that it is more suitable than other efforts: For example, the ETSI NFV Industry Specification Group (ISG) does not provide enough interface and specification detail: "It's quite high level," he says.

In a separate conversation, Delpon's colleague, Orange programme director Jehanne Savi, says the operator "is convinced OPNFV is a strong vehicle to reach a de facto NFVi standard" and bring to telcos the kind of "state-of-the-art cloud that the major Webscale operators have... with huge scalability, automation and different classes of service, all of which have different demands and needs."

She adds: "OPNFV is concrete -- there is code, it does testing, it has an open lab and any vendor can test its VNFs there."

Savi, who is responsible for Orange's "On Demand Network" (ODN) telco cloud platform, wants the industry to work towards a "VNF ecosystem with a certified marketplace... like an app store of functions. To get this level of flexibility we need an infrastructure that is quite standardized. OPNFV is dealing with the automation of the NFVi," she notes, adding that VNFs would need to be certified against the NFVi (there's another job for the Linux Foundation then!) and then managed by ONAP. "We have looked at various options but we need to have industrialized scale. Currently it takes nine months of integration to onboard a VNF... that kind of old school integration process is not viable on a global scale," adds Savi.

And that's likely a key reason why Orange has also developed a way to offer cloud-based applications to enterprises in Spain using the public cloud, while such timescales are reduced. (See Is X by Orange Showing Us the OTT Future for Telcos?)

As for ONAP, Delpon confirms it's still early days with that initiative. "It's not an industrial product yet. It has a way to go... but we believe it's the right place to do this."

He adds: "From now on, every network function we source will need to be ONAP-compliant. We have to create momentum with the data models and interfaces."

What Delpon is hoping for is an industry evolution where operators, vendors and all other partners are singing from the same hymn sheet -- and that would involve the vendors developing applications and functions that are cloud-native. (See NFV 1.0 Is Passé; Cloud Native Is Coming.)

"The VNFs [virtual network functions] are not cloud-ready... I believe it will be two years before we have cloud-native apps in production. That might sound like a long time but it isn't really," he believes.

Delpon also wants to see more companies involved in taking open source developments, including ONAP of course, and creating "productized code" that can be supported with professional and integration services. Amdocs and Tech Mahindra are "active" in this regard, he notes, but he'd like to see others stepping into this role. (See EXFO's Probes Added to 'Amdocs NFV Powered by ONAP', Bell Canada Reaches Milestone in Network 3.0 Vision With (ONAP) & Hook-Up With Amdocs and Amdocs Preps 'Carrier-Grade' Version of ONAP.)

All of which sounds like a big leap of faith for the vendor and developer community. But, ultimately, if a growing number of operators such as Orange, Vodafone and others start specifying the same interfaces and data models in their RFPs, then the vendors will need to work to that or not be involved in major deals and developments. And as Fran Heeran at Vodafone noted, that's easier for the small, specialist vendors to swallow than it is for the large integrated vendors, which have a lot more legacy business to lose.

The big question is -- can he operator community agree to demand the same interfaces and data models? And which industry group or organization will be the "keeper" of those specifications? The prospect of an "industrial disaster," as Delpon puts it, might rally others to the cause, but consensus and operator unity around telco cloud look a long way off just now.