For almost as long as network functions virtualization (NFV) has been a thing, telcos have grumbled about the flavor. A lack of interoperability, meaning one supplier's virtual network function (VNF) does not mix with another's NFV infrastructure (NFVi), has been one major reason for the sour faces. But telcos have also balked at the VNFs their vendors have served up. The waiters have been sent back to the kitchen to fetch something tastier. (See NFV Is Down but Not Out.)

What's the problem? Disgruntled telco executives will tell you that vendors have simply given pre-NFV dishes a virtualization dressing and expected customers to bite. In industry lingo, the network software is packaged up as a rather clunky stack that runs on a virtual machine (VM) that can sit on generic hardware. "Monolithic" is a word that frequently crops up when commentators describe these VNFs, conjuring images of ancient Britons at work on Stonehenge. This rough-and-ready rearchitecting of network elements -- NFV 1.0, if you like -- has not allowed telcos to "scale" or brought the cost savings they need.

If that sounds like telco fussiness, it isn't. Data traffic is clogging up telco networks like fat in a bad artery, and few are optimistic about revenue growth. "The traditional way of building networks is becoming too expensive," said Axel Clauberg, Deutsche Telekom AG (NYSE: DT)'s vice president of IP and optical networks (among other things) during a recent interview with Light Reading. Moreover, when a monolithic network function goes wrong, nursing it back to health can be time-consuming and laborious, said Peter Willis, a research executive at the UK's BT Group plc (NYSE: BT; London: BTA), during a conference last year. (See DT's Terastream: A Bigger Splash? and BT: Telco Mindset Could Negate Container Benefits.) 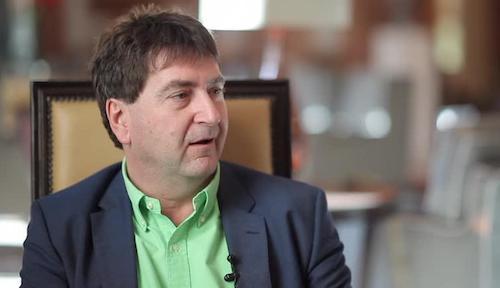 Deutsche Telekom's Axel Clauberg says the explosion in data traffic has made old-fashioned ways of building networks too expensive.

So what's the answer? Telcos want their suppliers to break down these monolithic stacks into small, reusable components that are easier to manage in a cloud-like network. "Cloud-native" is the in-vogue term for this vision. "By cloud native they mean rewrite the VNF so it is split into microservices to make it cheaper to scale out," says James Crawshaw, a senior analyst with Heavy Reading. How much cheaper? Well, Fran Heeran, the NFV point man at Vodafone Group plc (NYSE: VOD), gave Light Reading some clue in March when he revealed that "cloud-native" applications were using 40% fewer resources than virtual machines at the UK-based operator. (See Vodafone's Heeran: Cloud-Native Apps More Cost Competitive.)

To be properly cloud native, an application needs to be "stateless" rather than "stateful," explains Crawshaw. A "stateful" application, he wrote in a blog last year, is one that has local storage and uses a custom ASIC (application-specific integrated circuit) for processing. A "stateless" one separates the processing from the associated data and stores that data in the cloud. An operator could then deploy the rearchitected VNF at various points in the network with the full benefits of cloud computing. It would become easier, for instance, to run certain IoT (Internet of Things) applications in "edge" data centers -- much closer to end users -- to reduce latency, a signaling delay that occurs on data networks. (See From Virtualization to Cloudification.)

That could open up new service possibilities. By helping Vodafone deploy computing power at the network edge, virtualization done well could slash latency by 30 milliseconds, from an average of 50-60 milliseconds today, according to Scott Petty, the chief technology officer of Vodafone UK. With other technology-driven improvements, 5G services based on virtual and augmented reality would suddenly be feasible, he says. Cloud-native developments, then, might eventually spur revenue growth, and not just be a way to build more efficient and scalable networks. (See Vodafone's Holo Demo Dazzles Crowd, But Is It a Viable 5G Use Case?)

A change is gonna come
With vendors reluctant to adapt their menus, cloud-native applications have been slow to arrive. But the industry may be on the cusp of change as 2019 draws closer. In the telco world, support is growing for microservices run in containers, a lightweight alternative to a virtual machine for hosting a microservice, and controlled by Kubernetes, an open source tool for managing containers.

In addition, Vodafone's Heeran is trying to get service providers to agree on a common blueprint for the telco cloud (essentially, the NFVi) that vendors, or any software developer, could use as the basis to build cloud-native applications for the whole industry. Discussions with France's Orange (NYSE: FTE) and the GSM Association, which represents service providers globally, have already taken place, he told Light Reading this week. (See Vodafone's Heeran: Defining the Telco Cloud.)

Vodafone and Orange are agreed that there needs to be consensus around NFVi specifications and also around orchestration, with the Linux Foundation's Open Network Automation Platform (ONAP) initiative seen as the unifying vehicle for that development.

Building support for this initiative will not be straightforward. An obvious problem is a gap still exists in management and network orchestration: While most large service providers have now decided to support ONAP, Spain's Telefónica and a few others still cling to ETSI's Open Source MANO Community (OSM) alternative. Asked when his telco cloud might take shape, Heeran said the question was "hard to answer." (See ETSI's Open Source MANO Gets a Makeover.)

His efforts are just part of a broader industry shift, though. The Linux Foundation separately announced this week that its next ONAP release (codenamed Casablanca) will be able to run on Kubernetes.

And that raises questions about Openstack, the popular open source cloud management platform. With NFV 1.0, telcos have generally used virtual machines in conjunction with OpenStack. But with support for Kubernetes, they should be able to run more lightweight network functions in any public, private or hybrid cloud environment (this becomes even more critical in edge computing, where resource utilization is key). The virtual network function would become the "cloud-native network function," or CNF, said the Linux Foundation. One potential outcome here is that OpenStack may no longer be needed, in the long term.

Want to know more about the impact of automation? Check out our dedicated automation content channel here on Light Reading.

Even if Heeran's telco cloud initiative is just getting started, Vodafone's transformation is well underway, he insists, and he is not the only Vodafone executive who believes it. Just a few months ago, Petty was heard complaining about NFV at an industry conference in London. Among his gripes were the "massive change to the operating model" that NFV brings, and the lack of satisfactory vendor products for instrumentation and network management. Yet last week, during a Vodafone event at its Newbury headquarters, Petty's grievances were far less apparent. Vodafone is making "rapid progress" on virtualization, he told reporters, and an "aggressive move toward cloud-native systems." (See Petty's Grievances: The 5G Hopes & Fears of Vodafone UK's CTO.)

Deutsche Telekom's Clauberg also strikes a more upbeat tone than he has previously. "We are now seeing classical core services rewritten to be cloud-native and not just a virtualized version of an existing piece of hardware," he says. "The movement toward cloud-native development makes me feel very positive."

What's different? Clauberg thinks cloud-native technologies have started to appear partly because vendors have amortized their older investments in those monolithic virtual machines. This clearly has a logic. "There is very little incentive for the vendors to do this because they have got investments in a huge amount of code in existing products," said industry analyst Caroline Chappell in early 2016, when discussing the barriers to the development of microservices with Light Reading. In the interim, vendors have been under huge pressure from their customers to come up with cloud-native products. (See The Real NFV Revolution Is 5 Years Away.)

Of course, telcos have previously been optimistic about technology change, only to have their hopes dashed. Clauberg expected to have "full cloud-native production" by now, he freely admits. Other service providers were equally bullish when the NFV promise was first made about six years ago. Given the state of the industry in late 2018, few would expect to see a cloud-native revolution any time soon: In fact, at this week's Open Networking Summit in Amsterdam, Emmanuel Lugagne Delpon, the director of Orange Lab Networks, told Light Reading that it will likely be two years before the giant French operator has cloud-native applications "in production."

But their experiences have probably led telcos to be more cautious about making bold predictions today. One thing's for sure: If telcos are set for another six years of telco cloud disappointment, they really will be in trouble.