US authorities might think blessing a merger between T-Mobile US and Sprint will help to keep their country ahead of China in the 5G race. The two operators, after all, have promised to spend heavily on a 5G network. But if a merger proves a major distraction for Deutsche Telekom, T-Mobile's German owner, could it also hold up digitization in Germany, which is similarly battling China for technological supremacy? (See T-Mobile to Buy Sprint for $26.5B to Create US 5G Powerhouse and Can the 'New' T-Mobile Make America's Networks Great Again?)

That appears a genuine risk if the merger falls short of specified financial targets and ends up consuming Deutsche Telekom's resources. The state-backed German incumbent, which would be the enlarged T-Mobile's biggest shareholder with a 42% stake, has been at pains to insist the tie-up will not endanger investments in Germany, where it is building higher-speed fixed and mobile networks. But its financial health would clearly suffer in the wake of a transaction. (See DT Will Start Commercial 5G Trials in 2018 and DT to Splurge 12.5B in 2018 Capex as It Preps for 5G.) 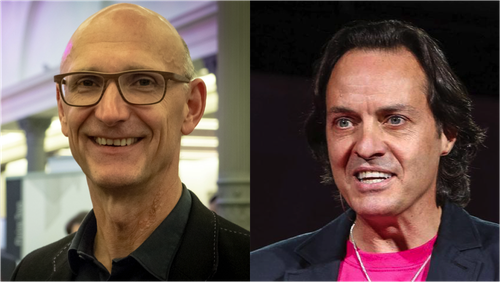 Timotheus Höttges, Deutsche Telekom's CEO, and John Legere, his counterpart at T-Mobile US, believe a merger between T-Mobile and Sprint will provide a stronger challenge to market leaders AT&T and Verizon.

This is mainly because Sprint Corp. (NYSE: S) comes with about $32 billion in net debt. As a result, Deutsche Telekom's overall net debt could rise to about 2.9 times its adjusted earnings (before interest, tax, depreciation and amortization). It will certainly exceed the "comfort zone" ratio of 2-2.5 until at least 2021, assuming a merger goes ahead in 2019.

Under plans announced earlier this year, Deutsche Telekom AG (NYSE: DT) plans to spend more than 5 billion ($6 billion) annually in its domestic market. It reaffirmed this commitment when announcing the Sprint deal this week. "Deutsche Telekom is sticking to its ambitious expansion plans for its fiber optic and 5G networks in Germany," said the operator in a detailed statement on the merger agreement.

But it has left itself with little room for maneuver. "It is clear that their ability to raise spending materially above this level will be constrained," Berenberg analyst Usman Ghazi tells Light Reading. Given labor and logistical bottlenecks in the German market, Ghazi has doubts this target was realistic in the first place. The Sprint deal could make it even harder to achieve.

Concern is already rife that Europe is in the digital slow lane compared with the US and China. Germany is a broadband laggard even by some western European standards. While many homes and businesses in France and Spain are now hooked up to super-quick all-fiber networks, Germans remain stuck with much slower connections using copper-based technologies like VDSL.

Change is coming. Under Deutsche Telekom's latest investment plans, "there will be a progressive shift out of VDSL into fiber," says Ghazi. But the transition is not happening fast enough, as far as some German politicians are concerned. With an economy that still relies heavily on manufacturing, Germany arguably has a greater need than other European countries for the low-latency connectivity that 5G and underlying fiber networks promise. Without these, and the applications they will support, Germany's Mittelstand companies could be left choking on the dust kicked up by their digitally powered Chinese rivals. (See Industrie 4.0: Rebooting Germany, Germany's Gigabit Lag and Germany's 5G Auction & the Gigabit Dream.)

Deutsche Telekom CEO Timotheus Höttges, who would become chairman of a merged T-Mobile US Inc. and Sprint, has been a regular critic of Europe's tough regulatory environment. Some observers blame this for Germany's shortcomings. But Deutsche Telekom's desire to be a "kingmaker" in the US, as Höttges puts it, should worry any German politician.