Deutsche Telekom has put up its first 5G antennas in Berlin, using equipment from China's Huawei, in a sign of its eagerness to be a frontrunner in the 5G race. (See Deutsche Telekom Touts Europe's First '5G' Connection.)

The state-backed German telco claims to have six commercial 5G antennas up and running in the Mitte and Schöneberg districts of downtown Berlin. Under plans revealed today, it aims to install another 70 antennas across 20 Berlin sites by the summer.

Deutsche Telekom cannot use these to provide commercial 5G services until other equipment is ready, including consumer devices. It is also waiting for German authorities to hold an auction of 5G spectrum licenses. (See Germany's 5G Auction & the Gigabit Dream.) 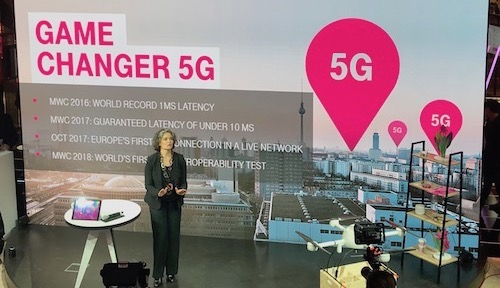 Claudia Nemat, Deutsche Telekom's board member for technology and innovation, tells an audience at Mobile World Congress that 5G commercial trials will start this year.

However, that auction could happen later this year. With Huawei Technologies Co. Ltd. promising to launch its first 5G smartphone next year, Deutsche Telekom could theoretically be in a position to start offering commercial 5G services in 2019. (See Huawei's First 5G Smartphones Will Arrive in Q3 2019.)

Officially, Deutsche Telekom is still guiding for a commercial rollout starting in 2020. "With the antennas in Berlin, we've set the foundation for commercial 5G rollout in Germany," a spokesperson told Light Reading. "But we don't know the timeline for spectrum allocation yet and we do not expect device availability before the end of 2019."

In the meantime, the 5G antennas will form part of a "testbed" in the heart of Berlin, where Deutsche Telekom can look into the performance characteristics and capabilities of 5G technology.

But the testbed antennas will ultimately be used in a real commercial network.

Deutsche Telekom has been able to obtain a 3.7GHz testing license for use with those antennas. Across Europe, spectrum in the 3.4-3.8GHz range is likely to support the very first 5G services: Regulatory authorities in various countries have either auctioned or plan to auction airwaves in these bands. (See UK's £1.4B '5G' auction looks bad for industry.)

The operator also indicated that its 5G equipment relies on much of its pre-existing 4G infrastructure in a so-called "non-standalone" implementation.

With this non-standalone or NSA variant, operators can use the 5G new radio technology, which was finalized in December, in conjunction with a 4G core network. Specifications for a standalone (SA) version of 5G, including non-radio features, are due to be frozen this summer. (See 5G Is Official: First 3GPP Specs Approved.)

The SA version is expected to support additional features and could help operators to address service requirements in the Internet of Things and non-consumer markets with greater ease.

In its statement, Deutsche Telekom said the use of NSA technology in sub-6GHz bands would provide support for wide-area coverage, multi-gigabit data throughput and millisecond low latencies.

5G force
Before today's announcement, the operator had already taken steps to prepare its German network for the rollout of 5G services. (See DT Plots 5G Across Entire Footprint.)

In late 2017, it struck a deal with Sweden's Ericsson AB (Nasdaq: ERIC) for the supply of radio access network (RAN) equipment that can be "software-upgraded" to support 5G services as and when they appear.

Besides investing in 5G-ready systems, Deutsche Telekom has also been launching 4G services using its 900MHz spectrum, giving it the wide-area network coverage it will need with higher-speed mobile data services.

It is also ramping up its investments in fiber, which can provide 5G "backhaul" links between basestations and core network systems. Having rolled out 40,000km of fiber last year, the operator plans to lay another 60,000km in 2018.

During this year's Mobile World Congress, a giant tradeshow held in Barcelona every February or March, Deutsche Telekom promised to carry out commercial 5G trials this year in all of its "big, integrated countries" -- meaning those geographical markets where it owns both fixed and mobile infrastructure. (See DT Will Start Commercial 5G Trials in 2018.)

The first trials would happen in Germany, said Claudia Nemat, Deutsche Telekom's board member for technology and innovation, with Hungary and Slovakia likely to follow.

Among other things, Deutsche Funkturm, the operator's towers subsidiary, will work on building the additional cell sites that 5G demands. After adding about 500 sites annually between 2014 and 2017, Funkturm will increase the annual rate of construction to about 2,000 towers in the "mid-term," the operator said.

Deutsche Telekom currently maintains about 28,000 towers across Germany, but executives have suggested this figure might eventually double with the rollout of 5G technology in the 2020s.