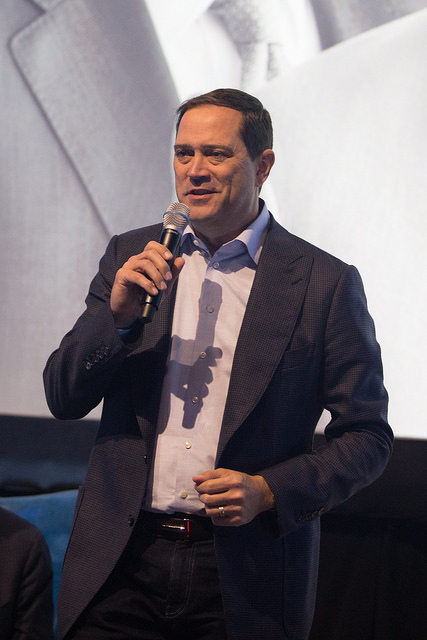 Cisco's Robbins
Now entering its fifth year, the 2020 Vision Executive Summit is an exclusive meeting of global CSP executives focused on navigating the disruptive forces at work in telecom today. Join us in Lisbon on December 4-6 to meet with fellow experts as we define the future of next-gen communications and how to make it profitable.

He added, "Our customers are less interested in being systems integrators and they are more interested in buying stuff that just works and gets to that outcome that they are trying to drive for."

Costs need to come down, Robbins said. And much of that cost is in operation. For example, even for an Ethernet switch, every dollar in spending on purchases results in $15 in operating costs, Robbins said.

Software transition
One journalist asked whether Cisco has completed its transition to software and subscriptions. The context of that question is that Cisco is undergoing a multi-year transformation from relying on selling networking equipment hardware to recurring revenue based on software licenses, services and subscriptions.

But Cisco isn't becoming a software company, Robbins said. "We will continue to add more software content to our portfolio, but we will continue to build maximum performance hardware, which our customers need." For example, custom hardware is required to drive encrypted traffic at speed, with analytics.

"The amount of software talent we have is just incredible," Goeckeler said. The company only recently began monetizing software independently of hardware, but more than 80% of its engineers are software engineers.

Net neutrality
Robbins called for a centrist position on net neutrality. As the US transitions between presidential administrations, he said, policy goes from extreme on one side to extreme on the left. "The answer is in the middle," he said. On the one hand, "I don't think that anyone should be able to throttle traffic for competitive differentiation," he said.

But some applications require prioritization. "I think that there are absolutely healthcare applications and other applications out there that warrant prioritization and paid usage," he said. For example, a videoconference between a patient and physician over the Internet should have high priority.

"I would want that to be prioritized over my neighbor watching a cat video," Robbins said.

International trade
A Mexican journalist asked about trade friction between countries, particularly with regard to the US, Mexico and the North American Free Trade Agreement.

"We're in a period where there's a lot of uncertainty, particularly with regard to trade around the world, obviously," Robbins said. "But I am an optimist." He cited the US, Mexico, NAFTA and trade with China. "All these economies are too important to the overall global economic situation for us to not ultimately get to a good place," with compromises and hopefully "without any short-term harm." Discussions around regulations and privacy are "relevant" and necessary, he said.

But there are risks. "If the geopolitical tensions turn to a broad-based all-out trade war, I think we'll all be affected," he said.