For the quarter, overall cloud revenue, which includes SaaS, platform-as-a-service (PaaS) and infrastructure-as-a-service (IaaS), was up 64%, to $1.4 billion -- still only a fraction of cloud plus on-premises software, which was up 6%, to $8.9 billion. 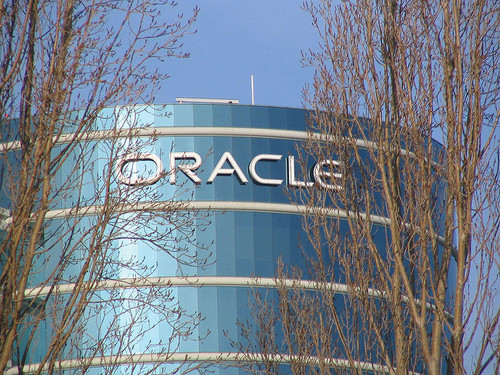 The AT&T deal, announced May 4, provided no revenue in the quarter, but will become an important reference customer and will demonstrate cloud momentum, Co-CEO Mark Hurd said. AT&T has more than 10,000 Oracle databases, including several hundred large databases with 70-75% of all company data. AT&T went to the cloud to achieve modernization and consolidation, and the company needed to meet regulatory needs on what could be put in the public cloud and what could not. AT&T is using Oracle Cloud Machine to put Oracle's cloud software on-premises in a private cloud.

Some 45% of cloud growth is coming from the company's existing customer base, with the rest coming from new business, Hurd said. "I believe we can get all our existing on-premises customers, roughly speaking, moving to our cloud infrastructure in time," he said. And when those customers move, they pay more -- triple the revenue to Oracle, and up. "If people move from our application support to our SaaS revenue, we get more money," he said.

On the call, Ellison singled out Salesforce for trash talk. This was the second year in a row Oracle sold more cloud annual recurring revenue than Salesforce.com Inc. ; the company is on its way to passing Salesforce and becoming number one in the enterprise SaaS market, Ellison said.

Comparing the size of Oracle's cloud business with other cloud providers is unclear, as they report results differently.

Oracle's overall $1.4 billion quarterly cloud revenue is smaller than Amazon Web Services Inc. (AWS). AWS pulled in $3.66 billion in sales in the third quarter, ending March 31, up 43% year-over-year. That's concentrated on IaaS/PaaS, while Oracle is strong in SaaS. Nonetheless, Oracle considers AWS a direct competitor; Ellison singled them out for a mention on Wednesday's call and executives from the two companies trash-talk each other. (See AWS Sales Still Impress Even With Small Slowdown, Amazon's Jassy Throws Punches at Oracle and Oracle Takes On Amazon in Cloud Infrastructure.)

Google's "other revenues," which includes enterprise cloud and other non-advertising business, drew $3.1 billion revenue in the most recent quarter. (See Google's Pichai: Cloud's One of Our 'Biggest Bets'.)

Like Oracle, Microsoft has both a legacy on-premises software business and a new cloud business. Microsoft intelligent cloud segment, which includes Azure and traditional server software, was $6.8 billion, up 11% in the first quarter of the year. (See Microsoft Wants Azure to Blur the Enterprise Edge.)

Oracle results compare favorably with other legacy enterprise vendors, which are making the transition to cloud, but sometimes finding it a struggle. For example, Dell Technologies posted a $1.5 billion loss during its fiscal first quarter on $18.2 billion revenue, despite a strong Infrastructure Solutions Group, which includes cloud components. (See Dell Reaps Benefits of Cloud Infrastructure.)

Hewlett Packard Enterprise also posted a loss, as it continues to restructure and spin off different parts of its business while focusing more on hybrid IT, cloud and software defined data center. (See HPE Posts Loss as Company Restructuring Continues.)

Cisco, which is transforming from a networking gear company to a provider of cloud computing and other IT services, announced plans last month to lay off 1,100 and forecast a quarterly loss. (See Cisco Cutting 1,100 More Jobs, Forecasts Revenue Decline.)

On the other hand, VMware reported revenues of $1.74 billion and net income of $232 million, for 9% year-over-year revenue growth. (See VMware's Cloud Momentum Continues in Q1.)