Networking is the future for VMware, poised to be as big or bigger than the company's traditional compute business, executives said on VMware's earnings call Thursday.

Over time, VMware Inc. (NYSE: VMW) has gone from one product, NSX Data Center, to a portfolio of products spanning telcos, as well as public cloud, including Amazon and Azure. NSX now has 4,500 customers, but it's still largely a high-end enterprise product. In the future, VMWare is looking to bring NSX to the mainstream midmarket, with hundreds of thousands of potential customers rather than tens of thousands today. VeloCloud, which VMware acquired late last year, is leading the way, with 2,000 customers, CEO Pat Gelsinger said on the company earnings call. (See VMware Takes On Cisco & Juniper With Network Vision, VMware to Acquire SD-WAN Startup VeloCloud and What VeloCloud Cost VMware .)

"NSX for the long term has a larger market opportunity than compute, and we're making good time on accomplishing that vision," Gelsinger said.

Hyperconverged infrastructure and virtual storage networks are also big opportunities for VMware, achieving 70% year-over-year growth for vSAN and the vSAN portion of the VxRail hyperconverged hardware, with more than 14,000 customers. VMware is number one in that market, and vSAN is growing faster than VMware's nearest competitor, Gelsinger said.

And the cloud is a growth driver as well. Hybrid cloud and software-as-a-service (SaaS) revenue comprised more than 10% of quarterly revenue for the first time in the most recently completed program. VMware Cloud Provider program, its partnership with IBM Corp. (NYSE: IBM) and other cloud providers to connect on-premises infrastructure with public cloud, is the largest component of the hybrid cloud/SaaS category, growing revenue over 30% year-over-year, VMware says.

"People are no longer putting Tinkertoys together themselves. They're saying, 'Give us the solution,' " Gelsinger said. 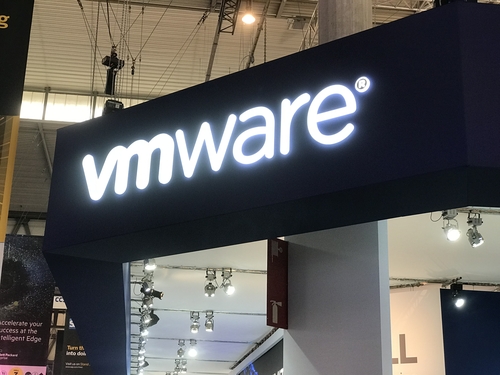 VMware at Mobile World Congress in Barcelona in February.
Now entering its fifth year, the 2020 Vision Executive Summit is an exclusive meeting of global CSP executives focused on navigating the disruptive forces at work in telecom today. Join us in Lisbon on December 4-6 to meet with fellow experts as we define the future of next-gen communications and how to make it profitable.

VMware reported $2.01 billion revenue for the first quarter fiscal 2019, up 14% year-over-year, based on strong performance across all product areas and geographies, the company said Thursday. (See VMWare Revenue $2.01B Up 14% YoY.)

Non-GAAP net income was $516 million or $1.26 per diluted share up 18% per diluted share year-over-year. Net income includes a gain of $781 million for the IPO of Pivotal . Dell Technologies (Nasdaq: DELL) owns controlling interest in both VMware and Pivotal. (See Dell's Software Engine, Pivotal, Climbs 5% on Its IPO.)

VMware beat analyst estimates, which were $1.955 billion revenue and non-GAAP earnings are anticipated to be $1.14 per share, according to Zacks Equity Research.

Dell, which owns a controlling interest in VMware, is considering going public by merging with VMware. VMware executives said on Thursdays call they wouldn't comment on that possibility. (See Dell Confirms Possible IPO or VMware Merger.)