Google Cloud named John Honeycutt, formerly CTO of TV giant Discovery, as VP for telecom, media and entertainment, signaling a strategic expansion in those markets. But Google isn't saying much about the strategy related to his appointment.

"John will lead the development and implementation of strategy for the Google Cloud telecommunications, media & entertainment verticals," Google said in a statement that provides little more than hints as to what Honeycutt's role will entail and in what direction he might take the web services giant.

According to Google: "From an internal perspective, Honeycutt will leverage his decades of expertise as a business operator to prioritize workflow and supply chain optimization."

OK, so he's seen as an efficiency expert -- that could manifest itself in a lot of ways.

"From an external perspective, he will drive efforts to accelerate cloud adoption amongst film studios, content creators and distributors, telcos, [multichannel video programming distributors], and gaming and esports companies."

That makes sense, but the devil will be in the detail.

We have follow-up questions in to Google.

It seems likely, though, that one of his main tasks will be to gauge what the media, entertainment, gaming and telco communities need from their public cloud partners. The competition is intensifying between the leading public cloud giants -- particularly AWS, Azure and Google -- to develop specific capabilities that would enable, for example, sophisticated enterprise and consumer services to be delivered from their platforms.

The current trend is for network operators and vendors to explore the potential of running some functions (whether customer-facing or internal operations) on public cloud platforms, but such efforts are about much more than just raw compute and storage capabilities and price economics: Connectivity, integrated application support and, increasingly, professional services are all likely to play a role. A public cloud provider might not be able to meet all the latency and throughput requirements needed for high-resolution, real-time gaming but there are plenty of support functions that could be offered by the likes of Google Cloud that could help enable such services.

In addition, of course, public cloud players such as Google will want to enlist the help of any large enterprise to promote public cloud services to their own customer bases. 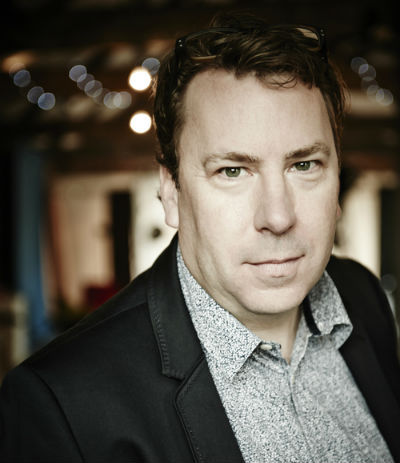 A slightly psychedelic shirt, seen here with Google's Honeycutt.
Get your strategic roadmap to the technology trends and business cases shaping the cable industry! Join us for the Cable Next-Gen Technologies & Strategies event in Denver on March 12-14. Don't miss this exclusive opportunity to network with and learn from industry experts -- cable operators and communications service providers get in free!

The job change is a big deal for Honeycutt, who spent 15 years at Discovery. For the last four, he was CTO, where he was "responsible for Discovery's entire technology stack, including all financial, business, collaboration, linear and non linear media technologies, information security, analytics and compliance." He led a team of 1,500 people across 60 locations "with an annual budget approaching $500 million," he says on his LinkedIn profile.

Among his projects at Discovery: Migrating media operations to the pubic cloud, including receiving content from production suppliers, through post production, linear playout and digital distribution across all platforms. That'll surely jibe with Google strategy.

During Honeycutt's time at Discovery, the company successfully delivered the 2018 Winter Olympic across Europe and rolled out multiple OTT platforms, he says on LinkedIn.

Honeycutt's record at Discovery indicates a possible direction for Google: He was "charged with developing and implementing long-term technology strategy to expand Discovery's traditional linear pay-TV model to include screens on all devices anytime, anywhere," according to his bio on the Discovery website. So it seems possible that Honeycutt would lead Google in enabling other media companies to develop their own streaming platforms. (See Comcast and Apple don't have a deal (yet) for the Apple TV , Can NBCU Crack the Economics of OTT? and TV Streaming Surged 165% in Q4 2019: Conviva .)

Honeycutt seems to have a strong background for the media and entertainment part of the job -- but no experience at all with the telecom sector, according to his LinkedIn profile. Given the specialized nature of the telecom industry, Honeycutt may need some deputies with the inside track on the often discombobulating world of the telco back office and IT infrastructure.

Honeycutt's arrival at Google is overshadowed by another big-name change -- three-year CEO Diane Greene is on her last days, replaced by 22-year Oracle veteran Thomas Kurian. (See Google: Greene's out as Cloud Boss.)

Google on Monday reported on its quarterly earnings that it's making big new investments in its cloud infrastructure. (See Google Doubles Capex to $25.46B, Mostly on Data Centers & Offices.)