Kubernetes is currently being deployed in development and greenfield applications, and hasn't yet been integrated into legacy brownfield applications, Matt Chotin, Cisco senior director, cloud products and solutions market development, tells Light Reading. The reason: Monitoring and orchestration tools are separate open source packages, and haven't yet been integrated into enterprise monitoring and orchestration suites. "You're basically becoming an open source integrator, which is not what enterprises are set up to do," Chotin said.

The announcement is a little confusing, because Kubernetes is itself an orchestration app. So by integrating Kubernetes into AppDynamics and CloudCenter, is Cisco orchestrating the orchestrator? 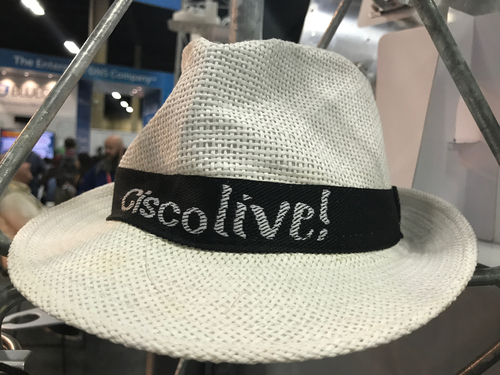 A snappy straw hat promotes the CiscoLive 2017 customer and partner conference.
Boost your knowledge of cloud-native software and innovations driving data center transformations! Join us in Austin at the fifth annual Big Communications Event May 14-16. The event is free for communications service providers -- secure your seat today!

Cisco sees its Kubernetes support as complementary to Kubernetes platforms such as Docker and Red Hat OpenShift.

CloudCenter manages the application lifecycle across 19 private and public clouds, for both traditional and containerized applications. CloudCenter can choose the best execution venue by benchmarking price and performance, deploy the application and set governance polices.

With the new version, CloudCenter can automate deployment of container apps and also manage those apps in conjunction with non-containerized dependencies, such as databases and other applications.

AppDynamics -- also the product of an acquisition by Cisco, this one in January 2017 -- provides deep visibility into applications and the user experience once applications have been deployed. (See Cisco Buying AppDynamics for $3.7B and Cisco's AppDynamics Looks to Drive Business Value.)

"The challenge with those tools is that siloed tools reinforce a siloed culture, which is the direct opposite of DevOpps, which is about integrating everything into a single solution," Cope said.

Cisco launched a container management platform based on Kubernetes in January. Cisco Container Platform is designed to allow teams to configure, deploy and manage container clusters uniformly both on-premises and in the public cloud. (See Now Cisco Is Getting Into the Kubernetes Racket.)