Ruth Porat, Alphabet's and Google's CFO, credited mobile search, YouTube and Cloud for the "robust growth," according to the company's earnings news release. Earnings growth was slower than the year-ago quarter, which saw $31.1 billion revenue, up 26% annually. Alphabet reported net income of $6.657 billion and diluted earnings per share of $9.50.

Analysts expected revenue of $37.34 billion with an earnings estimate of $10.58 per share, according to Yahoo Finance.

Google doesn't break out cloud revenues, which are included in the "other revenues" category. "Other revenues" also includes Google hardware, such as the Pixel phone and Google Home. That category generated $5.4 billion revenue, up 25% annually. 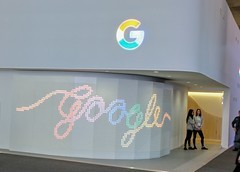 By comparison, Microsoft reported Azure revenue growth of 76% and Amazon Web Services was up 41%. AWS and Microsoft as the faraway market leaders -- in that order -- with Google third and IBM coming up close behind at fourth, according to Synergy Research.

Alphabet is still an ad business with some side-hustles, including cloud. Ads comprise $30.7 billion of the company's revenue, up 15% year-over-year, compared with 24% year-over-year growth in 2018.

Google's Q1 earning call script:
* Ad rev deceleration is nothing to worry about
* It's just the transition to new ad products
* We can't tell you anything about these new ad products, not even their general purpose
*If we keep saying machine learning enough will that help?

Google's margins were pinched by a $1.7 billion fine levied against Google by European regulators last month for abusing dominance of its search engine and limiting competition.

Why this matters
Google is a partner, demand driver and -- to a tiny but worrisome extent -- competitor to telcos, cable companies and other service providers. Video traffic comprised 75% of all Internet traffic in 2017, and that's expected to increase to 83% by 2022, according to Cisco's annual Visual Networking Index. A lot of that traffic is YouTube video -- and Google's planned Stadia streaming gaming service could add enormously to video demand.

And, finally, Google is taking baby steps toward becoming a possible telco competitor. In addition to its longstanding Google Fiber project -- which has had its problems, Google recently expanded its VPN and interconnect capabilities to connect enterprises with Google's cloud. And Google also provides fixed wireless. Google claims it is not competing with carriers and sees them as partners.