Google Fiber: A timeline of the good, the bad and the ugly

It might be hard to believe that almost a decade has slipped by since Google introduced what was then billed as an "experimental fiber network" that would not only deliver speeds of 1 Gbit/s to the home and explore new bandwidth-intensive services and applications, but also be "open" to other service providers.

While Google's notion of an "open" network didn't take shape, Google Fiber Inc. has gone well beyond an experiment, as it followed with expansions to many more and teamed baseline broadband service with pay-TV and voice offerings, and later extending service to business customers.

When Google Fiber came on the scene, it drew lots of fanfare, generated plenty of hype, and raised many questions. Will it be turned into a bona fide, profitable business? Is this being done to prod cable operators and other ISPs to move more rapidly into the 1-Gig era and provide plenty of capacity headroom for Google's long-rumored OTT-TV service and other bandwidth-heavy apps? Something else? All of the above?

Whether it was by design, Google Fiber has most certainly had something to do with the pace at which 1-Gig broadband was deployed by others, whether it was telcos like AT&T or the US cable industry. Per the NCTA  The Internet & Television Association , speeds of up to 1-Gbit/s (in the downstream direction, anyway) is available today across 80% of the US via cable networks, up from just 5% in 2016. It's hard to say how much credit for that pace should be given to the specter of Google Fiber, but it gets plenty in my book, even as cable now starting to push toward symmetrical 10-Gig speeds. (See CES 2019: Cable's 10G Tech 'Will Work'.)

As for being a business, Google Fiber is still lumped in with parent company Alphabet Inc. 's "Other Bets" unit, which saw full-year 2018 revenues rise 25%, to $595 million (thanks mostly to Google Fiber and Verily, a research group focused on the study of "life sciences"), while the operating loss for the year widened to $3.4 billion, from $2.7 billion in 2017. Accrued capital expenditures for the year at Other Bets was $181 million in 2018, down from $493 million in 2017, "primarily reflecting investments in Fiber," Ruth Porat, CFO of Alphabet and Google, said earlier this month on the company's Q4 earnings call.

Early on, Google Fiber's hype train did capture lots of attention, imagination and criticism with its savvy, demand-driven "Fiber Rally" deployment model and disruptive 1-Gig price points. Hundreds of cities around the nation clamored to be the first to get Google Fiber, and others were likewise excited when they were included in Google Fiber's ambitious expansion plans. 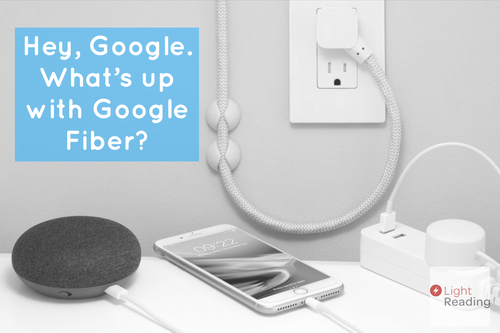 But Google Fiber also came up against the challenges of building and operating a wireline broadband business that others already in that market, including cable operators, expected Google to encounter, with high costs and regulatory hurdles and burdens chief among them.

The technology part of that challenge reared its ugly head this month, when Google Fiber announced it would pull out of Louisville on April 15 after discovering that its testing of shallow trenches for fiber, key to its deployment plan for that particular market, did not pan out. Google Fiber noted in this blog post about the situation that it would have to "essentially rebuild our entire network" to provide the service it envisioned, and ultimately decided that going to such lengths would be a bad business decision. (See Google Buries Louisville Fiber Plans.)

While Google Fiber was not that far along in the Louisville deployment, the pullback wasn't a good look, amplified by a report that Louisville city leaders were "taken by surprise" by Google Fiber's decision and even tried, to no avail, to urge Google to stay and compete with incumbents AT&T and Charter Communications. This also wasn't the first time Google Fiber didn't go through with its plan in a given market because of build-out problems. In the fall of 2014, for example, Google Fiber and Leawood, Kan., scuttled an agreement forged about a year earlier because of construction issues that Google discovered. That opened the door for a new agreement between the town and AT&T.

The Google Fiber story is far from done, as it stressed that the decision in Louisville will have no impact on its other markets, where it continues to serve and add customers.

Despite a promising and ambitious start and a sizable list of accomplishments that followed, Google Fiber has also had its share of fits and starts and disappointments, and arguably has fallen short of where it was expected to be almost a decade after it threw down the gauntlet. It's not an easy business.

Here's a look back at highlights, important moments, and a few low points of the Google Fiber era (so far).