Google is on course to deliver a bandwidth breakthrough for its Dunant subsea cable and, in doing so, believes it will be first to implement space-division multiplexing (SDM) technology in a submarine cable network.

The private, 6,400km Dunant cable, connecting the US and France, will transmit at a rate of up to 250 Tbit/s when it goes live in the third quarter of 2020. SDM uses additional fiber pairs -- 12, rather than six or eight in traditional subsea cables -- and power-optimized repeater designs, Google stated in its Google Cloud Blog.

Google is implementing the technology in partnership with subsea cable network builder and technology developer SubCom. 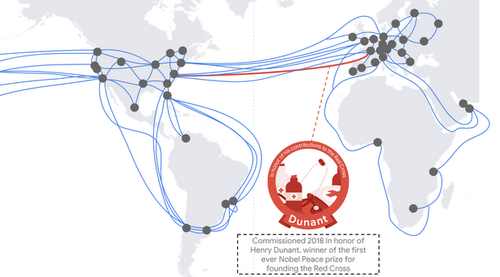 The Dunant cable will run between Virginia and northern Spain.

Dunant's transmission potential of 250 Tbit/s is noteworthy -- Google says that's "enough to transmit the entire digitized Library of Congress three times every second." That compares with 160 Tbit/s for the Marea cable built by Facebook and Microsoft that connects the US (Virginia Beach, Virginia) with Bilbao, Spain.

Traditional subsea cables rely on dedicated lasers for each fiber pair to amplify the optical signal along the length of the cable; SDM allows pump lasers and associated optical components to be shared among multiple fiber pairs.

Even though it'll be more than a year before the network is operational, Google will likely be first to market with an SDM-enabled network, notes Heavy Reading principal analyst and optical technology specialist Sterling Perrin.

Why this matters
SDM has been in the theoretical and academic realms for years; commercial deployment would be a breakthrough, Perrin says. The transition shows the industry is running out of fiber-optic capacity using conventional techniques. "Optical networking is approaching the Shannon Limit, which is forcing companies to seek capacity gains in new areas that will be more economical. SDM is an example of this," Perrin says.

The Shannon Limit is a theoretical maximum information transfer rate for a channel.

"SDM has been a big area of research for many years," Perrin says. "Recent research has focused on subsea networks because the need is greatest, due to the high cost of laying new fibers cross oceans and also limitations to the number of fibers that can be packed into a subsea cable."

In addition to Google, other web-scale giants such as Facebook and Microsoft have been very active in similar research, and Nokia is "strongly promoting SDM as the inevitable future of optical transmission," Perrin says.

Infrastructure improvements such as those to be deployed on the Dunant cable are required as Internet users demand more bandwidth for video and other cloud applications, and that demand is set to increase further with the advent of 5G, edge computing and the Internet of Things.