Consolidated Streams Into the Future With 'CCiTV'

As cord-cutting becomes more rampant and traditional pay-TV sub bases erode at an alarming rate, some service providers are focusing on broadband and embracing OTT-TV options while others are moving ahead with new streaming TV services of their own.

In the case of Consolidated Communications, it's doing a bit of both in some of the northern New England markets that it acquired in July 2017 from FairPoint Communications.

As its first home-grown pay-TV product for that region, Consolidated has begun to introduce CCiTV, a streaming TV service developed in partnership with MobiTV that's supported by an operator-supplied Android TV box as well as a range of retail platforms, including Amazon Fire TV Sticks, web browsers and iOS and Android smartphones and tablets. 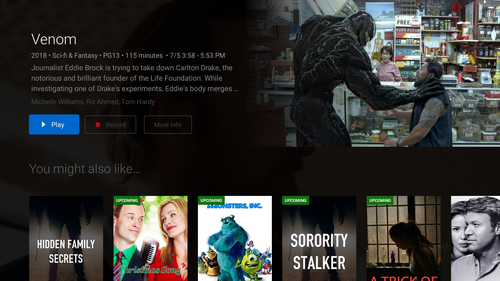 Consolidated Communications is using a customized UI and MobiTV's platform to offer its new streaming service on operator-supplied Android TV devices and select third-party devices such as the Amazon Fire TV Stick.

Consolidated has launched CCiTV in its Portland, Augusta and Lewiston, Maine service areas, and is making plans to expand it to its other properties in the region.

That new video streaming offering, which must be bundled with a broadband service under a handful of tiers, features a line-up of linear TV channels in HD, a cloud DVR starting at 50 hours of storage (with an upgrade option to add 50 hours more, up to 300 hours, in $5 per month increments). CCiTV allows subs to access up to five streams at a time.

Save for some localized variances (such as the addition of regional sports networks), CCiTV's line-ups look similar to the channel line-ups it offers in other "legacy" Consolidated markets that have been using managed IPTV services and in cable systems that rely on QAM-based video, Rob Koester, VP of consumer product management at Consolidated, explained.

Like other service providers, Consolidated is not immune to a declining pay-TV market that has hit cable operators, telcos and satellite companies alike. Consolidated ended Q2 with 89,531 video connections, down 8.5% compared to the year-ago period.

Koester said Consolidated gravitated to MobiTV's customizable platform and the option to lease and sell Android TV boxes because it "replicates the lean-back" TV experience but uses an updated interface, supports third-party retail devices, and, more generally, is made to appeal to the cord-cutter crowd.

"We think it gives us a lot of tools in the belt," he said.

Consolidated isn't breaking down the financials of the CCiTV set-up, but the overall costs are expected to be much lower than its legacy pay-TV platforms. Some of that pain is reduced by less expensive Android TV boxes, bring-your-own-device options, and operational savings that will come from a customer self-install option, Koester said.

Still, Consolidated isn't saying if or when it will bring CCiTV to its other markets, which include parts of Illinois, Pennsylvania, Minnesota,, Texas, California and Kansas. "Our focus [with CCiTV] is on Northern New England now," Koester said. "As we get a little further down the road I think we'll take a real hard look at the other markets and what is the right decision for each of those markets."

Meanwhile, Consolidated can continue to play up its OTT-TV partner options in those markets when broadband customers are looking for a pay-TV alternative.

While acknowledging that it is still difficult to quantify the value of those OTT relationships, Koester said they have helped Consolidated retain broadband customers and, in some cases, encourage customers to upgrade to higher-speed tiers better equipped to handle the bandwidth demands of OTT-TV services.