Things could get interesting in Europe now that Comcast is buying Sky. While Liberty Global may partner with Sky in securing and licensing content, including live sports and movies, the companies are also "healthy competitors," Liberty Global CEO Mike Fries acknowledged to Bloomberg in an interview in which the exec weighed in on the implications of Comcast's pricey play for the UK-based video and media giant.

"We're excited for the competition" with Comcast, Fries said. (See Will Comcast's Pricey Play for Sky Pay Off?, Comcast Boosts Cash Offer for Sky and Comcast Outbids Fox for Sky With Offer of £17.28 Per Share.)

And he's confident that Liberty Global -- which is a partner of Comcast Corp. (Nasdaq: CMCSA, CMCSK) in some respects (they are, for instance, part of the RDK Management LLC joint venture for set-top box and gateway software) -- will remain strong in its footprint, where it generally has about half of the video and broadband market. 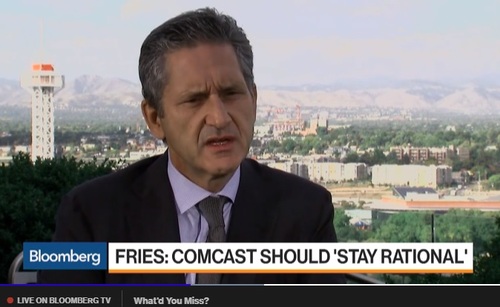 Liberty CEO Mike Fries offered a word of advice to Brian Roberts as US-based Comcast gets ready to open up shop across the pond. (Image source: Bloomberg)

At the same time, the premium that Comcast is paying for Sky "validates, to a large degree, the value of European pay-TV and broadband" and Liberty Global's own business model, he added. "There's this huge disconnect between public and private multiples."

He also imparted some guidance to Brian Roberts, Comcast's chairman and CEO, as the company now moves to seal up the Sky acquisition and dive deeper into Europe.

"My advice to Brian would be to stay rational," Fries said. "The UK market is a highly rational market -- very competitive, very promotional and transactional, but rational  I think you have to stay rational when you put that kind of money out."

Like what we have to say? Click here to sign up to our daily newsletter
Related Stories
COMMENTS
Newest First | Oldest First | Threaded View
Add Comment
Be the first to post a comment regarding this story.
EDUCATIONAL RESOURCES
sponsor supplied content
Video Platform Infographic
Direct-to-Consumer Solution Brief
Educational Resources Archive
More Blogs from The Bauminator
Harmonic gets lift from agreement with big shareholder