Europe's Telecom Sector Is Not Perfect, but It's Less Rotten Than America's

Take the hot topic of 5G leadership, for instance. Service providers such as UK-headquartered Vodafone Group plc (NYSE: VOD) have previously rejected criticism Europe is lagging the US in 5G. Quizzed about this lag, one senior executive at a large European telco gave a withering appraisal of US mobile networks and the poor service quality they offer. But the same executive insists Europe will fall well behind the US unless European watchdogs loosen up like their US counterparts. (See European Telcos Slam '5G' Efforts in Asia, US.)

The telco narrative is that European authorities are sacrificing the industry's long-term health for the consumer's short-term benefit. Regulatory opposition to merger activity has left Europe with an infestation of sub-scale networks too weak to consider ambitious infrastructure projects. John Strand, a consultant, says other regulatory heavy-handedness has driven operators including BT Group plc (NYSE: BT; London: BTA), Telecom Italia (TIM) and Telefónica to consider spinning off their networks. "EU policymakers reap what they sowed," he wrote in a research note last week. "Overregulated Europe is not a good place to invest in networks." (See Eurobites: Telefónica Considers Sale of Fixed-Line Stake to Reduce Debt Pile, Telecom Italia to Spin Off Fixed Lines, Increase Automation and Only BT's Dismemberment Will Sate Rivals.)

But the case that Europe's telecom sector is rotten, and that it would do better with fewer service providers, is a hard one to make. For a start, the US came just 16th in a recent OECD ranking of broadband penetration, behind 13 European nations. On the penetration of fiber-based networks, which support higher-speed connections than old-fashioned copper, it managed only the 25th spot, putting it behind France, Portugal, Spain and various Baltic and Nordic countries.

Europe did fare worse in mobile, with the US ranked fourth by the OECD on penetration at the end of 2017. But European customers may be getting a much better deal. In a separate ranking of the "mobile network experience," carried out by STL Partners in 2016, the US came tenth, below France, the UK, Italy, Germany and Spain. Earnings data shows US consumers pay dearly for that experience. The average postpaid customer at AT&T Inc. (NYSE: T), one of the US giants, stumped up $58 a month last year. Orange (NYSE: FTE), the French incumbent, currently makes about $25 per month from one of its own postpaid subscribers in France. (See The US 5G 'Lead' Over Europe Is Bluster.)

The long-running argument that consumers will eventually pay the price, as operators' investment capabilities are squeezed, also looks unconvincing. Light Reading examined data from five of the biggest European operators -- BT (UK), Deutsche Telekom AG (NYSE: DT) (Germany), Orange (France), Telecom Italia and Telefónica (Spain) -- and found that annual capital expenditure, excluding investments in the Americas, had risen at four of those companies, as a percentage of revenues, between 2013 and 2017. By contrast, both AT&T and Verizon Communications Inc. (NYSE: VZ), the two largest service providers in the US, cut their spending, on this basis, over the same period. (See Fat Cats Get Fatter as Jobs Go to the Dogs.)

Capital Expenditure as Percentage of Revenues in Last Fiscal Year 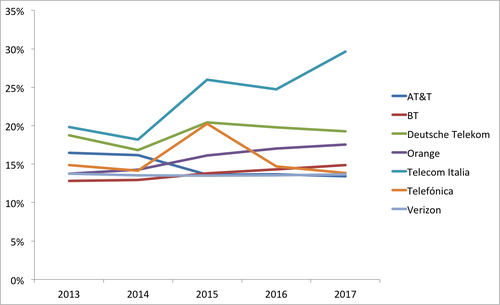 Europe's operators look more challenged on profitability. Of the five operators, only Deutsche Telekom and Orange reported growth in the margin for earnings before interest, tax, depreciation and amortization (EBITDA) between 2013 and 2017. The median figure was down from 33.4% to 31.2% over this period. But that still makes them extremely profitable companies. AT&T's EBITDA margin in 2017 was just 28.2%.

From an investor's perspective, the five European operators have clearly been a disappointment, each witnessing a fall in its share price, on major exchanges, in the most recent fiscal year. But this is not just a European phenomenon. Indeed, shares in both AT&T and Verizon also fell in the 2017 fiscal year. Telcos everywhere face concern about their long-term prospects, and failure to uncover new sources of revenue growth, as the Internet giants continue to get stronger.

Nor is the divestment of network assets happening only in Europe. Both CenturyLink Inc. (NYSE: CTL) and Verizon offloaded infrastructure units last year. US mobile operators including Deutsche Telekom's T-Mobile US Inc. subsidiary have sold towers to infrastructure specialists like Crown Castle International Corp. (NYSE: CCI), which lease network capacity to all of the country's main service providers. (See Verizon Nearing $3.5B Data Center Sale to Equinix  Report.)

Cheenu Seshadri 7/20/2018 | 12:43:41 AM
Selective and erroneous use of data Agree with d66dd23b's post. The article states incumbents in many European countries are not as dominant as AT&T and Verizon. Not true at all. Only UK among the major European economies (rest being Germany, France, Spain and Italy) has a more competitive wireless market vs. the U.S. as measured by the Herfindahl-Hirschman index (HHI) using either service revenue or subscriber count. Similarly the pricing comparison of US and France wireless plans does not account for quality differences - the FCC has done detailed analyses and again only the UK seems to offer consumers a better deal than the U.S. For more on these analyses, refer to: https://www.slideshare.net/CheenuSeshadri/tmobile-sprint-merger-assessment

Time will tell which approach gives the operators a chance to lead in 5G!
Reply | Post Message | MESSAGES LIST | START A BOARD

d66dd23b 7/19/2018 | 11:41:33 AM
Misleading comparisons Comparing broadband access in the USA to Europe is a bit misleading. Those are very different environments for several reasons.

The EU in total, including the UK, has about 45% of the total surface area in the USA. There are two states in the USA that are larger than the largest member of the EU (France). That is true whether or not you include France's Overseas Administrative Divisions.

There also aren't a lot of deserts or arctic forests in the EU,

The USA population density is about 32% of the EU's.