THE HAGUE -- SDN NFV World Congress -- After years of research, trials and incremental NFV steps, Colt is ready for a broad, company-wide telco cloud deployment that will come in the wake of a network launch in North America and additional coverage expansion in Europe and Asia.

The company has been working out the best approach to network functions virtualization and cloud-enabled services for several years and now believes it has the right strategy for its customer base of large enterprises and can source the technology elements it needs to run a telco cloud platform in an efficient and increasingly automated way.

The first stage involves the rollout of a generic universal CPE (uCPE) that will be able to support multiple virtual network functions (VNFs) such as virtual firewalls, cloud-based WAN acceleration and SD-WAN. Colt's technology partner for this element is the Ensemble unit at ADVA, which has worked on this development with the operator for some time. (See ADVA: Ensemble Is Putting the 'M' in MANO.)

Colt has been working on this, and other NFV developments, for a while, taking small steps and ensuring that what it delivers to its enterprise customers will meet their needs: "We are taking our time, reacting to market demand. This is the right time for a commercial launch as now there is real market demand," Voltolini tells Light Reading. 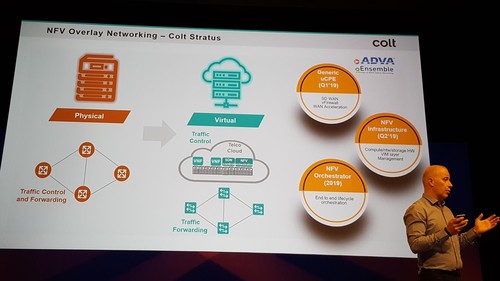 Colt's Mirko Voltolini shares an update of the operator's NFV deployment strategy with attendees at the Hague event.

So far Colt has been developing its uCPE strategy using customer premises hardware from Advantech, but the Ensemble software will run on any standard hardware platform. "Cost is a very important consideration," says Voltolini.

And he notes that this will all be offered as an "unmanaged NFV model." Colt provides the box, the VNFs and the connectivity, but the enterprise customers, which are typically of a size that have their own IT and security teams, manage the VNF policies themselves.

This does, though, represent an evolution of Colt's SD-WAN strategy. The operator already has an SD-WAN offering in the market to meet market demand, but that was developed as an overlay with its own dedicated compute and storage, whereas the new offer will be integrated into its network cloud architecture, which brings us to the second stage of Colt's NFV rollout. (See Colt Takes Versa on Its SD-WAN Journey.)

NFVi in an integrated package
To complement the rollout of its generic uCPE, Colt will take its Stratus network cloud initiative into production with the deployment of its NFV infrastructure (NFVi) that comprises a number of software tools, networking systems and IT hardware platforms developed by multiple vendors but pulled together and delivered to Colt as a pre-integrated platform by one key NFVi partner.

Colt wants to use "best of breed" and have an open, modular architecture but it doesn't have the resources to pull the different elements together, so it's going to award a deal to a single company that can deliver a pre-integrated OpenStack-based NFVi solution that incorporates a VIM (virtualized infrastructure manager), an SDN controller, and compute, storage and networking hardware. That NFVi solution will be integrated with the operator's packet-optical network (dubbed the Colt IQ Network). "Automation is the big driver -- we want to be able to manage this all end-to-end and be able to offer everything on-demand  the network cloud has to be integrated with the compute." (See Colt: Automation's 'Silent Killer' Is Poor Quality Data.)

Colt has previously identified several vendors that have been included in its NFVi tests and trials to provide the final NFVi components. These include Ciena's Blue Planet unit, Accedian and Netcracker. But Voltolini says a final decision on the ultimate NFVi integrator, and the individual parts that will be pulled together by that integrator, is yet to be made.

Down the line: NFV Orchestrator
The third stage will involve the deployment of an NFV orchestrator for "end-to-end lifecycle orchestration."

Voltolini points out that virtual services can be delivered initially without such an orchestrator but that the process will be more efficient once one is deployed. But Colt's evaluation is still ongoing. "There are a number of players that could fill this role," he notes, adding that he doesn't much care whether the tool ultimately selected is developed using code being developed by either of the main open source MANO groups (ONAP and OSM).

What will swing Colt's decision more is whether the operator is already working with a company on its NFV strategy. "The aim is to engage with as few companies as possible to make the management of the systems as easy as possible -- we don't want too many relationships to handle," he notes.

It's worth noting that Colt has always been at the forefront of SDN and NFV developments, often further ahead in terms of initial trials and deployments than many other network operators: That it is looking at 2019 as the big year for deployment is testament to how the virtualization process has crawled at a pace much slower than expected or indeed hoped for by the carrier community. (See NFV Struggles With Its Six-Year Itch.)

The shift into full NFV production mode comes as Colt, which already has a network spanning more than 200 cities in 29 countries and connecting more than 870 data centers, adds to its physical infrastructure. Voltolini noted that following its 13-city launch in the US and Canada, Colt will extend its network in ten additional cities in the European Union and Asia this November. (See Colt Launches US Operations.)

All the while, the operator is looking at how it can further automate its processes and interconnections with other networks. In addition to some very interesting collaboration based on blockchain, Colt has been working with its operator peers on the development of open APIs for SDN federation -- it plans to unveil its latest developments during the upcoming MEF event -- and extending its tests with artificial intelligence tools for network management and assurance under its Sentio program announced last year. (See Colt Preps AI-Enabled Network Management and Colt Ramps Its Blockchain Efforts, Explores SDN Federation Use Case.)