NFV Struggles With Its Six-Year Itch

THE HAGUE -- SDN NFV World Congress 2018 -- Most technologies hit some rough ground before the going is smooth. Gartner's famous (infamous?) hype cycle describes this as the trough of disillusionment. But with virtualization it risks becoming the chasm of doom.

Day one of this year's SDN NFV World Congress would have left many regular attendees feeling as if they had just received the same wretched birthday present for the umpteenth year in a row. And that's not just because The Hague is possibly the dullest town in northern Europe after Slough, interesting (for the wrong reasons) only when Russian spies are in town for some routine sightseeing.

Notes of desperation and disappointment colored the keynote presentations from Orange (NYSE: FTE) and Deutsche Telekom AG (NYSE: DT). Speakers and attendees depressingly remembered it was the sixth anniversary of network functions virtualization (NFV) as a concept. In the wedding anniversary world, year six is an occasion for the exchange of sugar-themed gifts. But there is nothing sweet about NFV. Telcos are a long way from where they expected to be, executives at the show acknowledged.

Even the optimists cannot disagree the conversation has barely changed since this time last year. If there is not disappointment, there is certainly déjà vu. Service providers are still complaining that vendors have not met their needs. Vendors are still complaining they are convenient scapegoats. Cultural and skills transformation remains the biggest hurdle. Expressions like "waterfall" and "DevOps" preoccupy the industry in the same way "Brexit" preoccupies British politicians.

The newest new thing is "cloud native." This term, which actually cropped up on previous occasions before 2018, describes a virtualization nirvana where network functions are broken down into small components that can run in any public, private or hybrid cloud environment. It is this "cloudification," and the benefits it promises, that telcos have been aiming for ever since NFV lurched off the starting blocks, executives say. (See NFV 1.0 Is Passé; Cloud Native Is Coming.)

The good news is that vendors at last seem to be developing the cloud-native products operators need, after a long period in which they have continued to flog more restrictive NFV gear. This does make sense: Vendors would have been in little hurry to scrap the products they built when customers first issued the NFV demand. As those products reach the end of the investment "lifecycle," suppliers are coming up with replacement goodies to suit the current telco tastes. (See DT's Terastream: A Bigger Splash?) 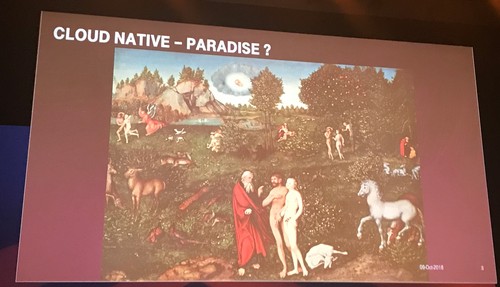 Deutsche Telekom's Axel Clauberg hopes the cloud-native paradise does not turn into hell.

Unfortunately, there is no compelling reason to assume this cloud-native transition will be any simpler than take-one virtualization. Deutsche Telekom's Axel Clauberg is evidently worried the industry will cock up the cloud-native paradise just like that dodgy snake screwed up the Garden of Eden (yes, he did use the religious analogy). (See DT's Clauberg Urges Cloud-Native Caution.)

"There is a common view that not all of the challenges we have identified for the cloud-native world are being addressed," he said during his keynote presentation on Tuesday. "We need to think about solving the orchestration and automation challenge before going to full cloud-native deployment."

One industry source who spoke with Light Reading said operators were only now starting to "onboard" virtual network functions that are not cloud-native. (France's Orange, worryingly, has revealed that onboarding a virtual network function took as long as nine months in Spain.) The cloud-native shift will require a comprehensive overhaul of network architecture, he said, and is unlikely to happen fast. (See Orange Issues Telco Cloud Rallying Cry.)

Hyperscale web companies have been able to adapt rapidly to new technologies because they are not encumbered in the same way as telcos, our source explained. Essentially, they don't have the same legacy networks, they don't have thousands of staff with outdated skills, and they aren't regulated to the same extent. Clauberg seemed to recognize some of this when he said: "We are not hyperscales. Google is pushing Kubernetes, but it is a different use case they had and applying it in our world requires hard work." (Kubernetes is an open source tool for managing "containers," which could help service providers break virtual network functions into smaller, cloud-native components.) (See Orange Faced With 'Reskilling' Task for 50K Workers.)

Pull yourselves together
If telcos could only pull together, they might have a better chance of succeeding. But the industry seems to be riven by disagreements. Take the fun topic of management and network orchestration, for instance. While most big service providers have now backed the Linux Foundation's ONAP initiative, Spain's Telefónica and some other notable companies still prefer ETSI's Open Source MANO alternative. "It is hard to see which one vendors are betting on," said Javier Benitez, a senior network architect at UK-based Colt. For smaller operators, meanwhile, ONAP and its millions of lines of software code might simply be impractical. Some are likely to opt for alternative vendor products or managed services to support their virtualization strategy. If ONAP ultimately fails, bigger players might also go down this route. (See Is X by Orange Showing Us the OTT Future for Telcos? and Netcracker Launches Telco Cloud-as-a-Service.)

Elsewhere, the issue is not so much disagreement as duplication of effort. Even the largest operator cannot possibly commit resources to every industry association that has sprung up in the last decade hoping to influence developments. Instead, operators are forced to choose between the groups that appear to be doing the same thing. The ideal solution would be a merging of initiatives. In the meantime, leading service providers continue to champion some associations over others. For Deutsche Telekom, it's the Telecom Infra Project, ONAP and the ORAN Alliance. While Orange would agree on those, it also thinks OPNFV has a game-changing role to play in defining cloud-native standards. Few others have attached such importance to OPNFV. (See DT's Clauberg Sounds Warning on Profusion of Industry Groups.)

Can the outlook really be so downright bleak? Six years ago, NFV was a "call to action" for an industry worried about the challenge from cloud providers. That same phrase cropped up in today's presentations. "We have to accelerate because the alternative is that public cloud providers will take the market," said Clauberg. Unless that acceleration happens against all the apparent odds, the warnings will eventually give way to an unpleasant reality.

PaulERainford 10/11/2018 | 4:17:50 AM
Re: What'sworng with Slough? It's Slough as in Slough of Despond. There's a town near where I live on the Isle of Wight that is bigged up on the tourism website as having 'vibrant multicultural cuisine'. The grim reality is a strip of dodgy-looking kebab shops, MSG-slathered Chinese takeaways and when-KFC-goes-bad chicken joints.
Reply | Post Message | MESSAGES LIST | START A BOARD

[email protected] 10/10/2018 | 12:23:10 PM
What'sworng with Slough? Slough is a thriving, multi-cultural town with a solid culinary culture. I would ask you to recoonsider the benchmark used for "more boring than.."

Clermont-Ferrand, Wurzburg or Zagreb. If you insist on remaining within the UK boundaries consider Stourbridge