LONDON -- Automation & the New Carrier Network -- Colt has highlighted the risks of trying to automate systems and processes when dealing with poor quality or inconsistent data that is difficult to interpret without human intervention.

Fahim Sabir, the director of architecture and development for the UK service provider's Colt on Demand business, told attendees at Light Reading's inaugural automation event in London today that data quality has been a massive concern for Colt Technology Services Group Ltd as it has worked on automating parts of its business.

"Data quality is the silent killer the thing that absolutely hurts," Sabir said during a keynote presentation this morning. "When you are doing a manual task you have to make sure the operational organization documents it in a way in OSS and BSS platforms so that things can be automated. No matter how smart computers get, human beings are smarter. They can take the information and work out what it should actually mean."

Automation for the People 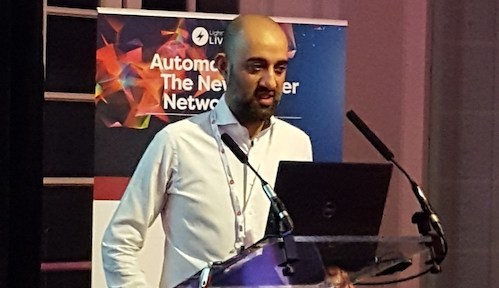 Fahim Sabir, the director of architecture and development for Colt on Demand, says telcos need to convince operational and delivery teams to trust automation.

Sabir's comments draw attention to the dangers of racing to automate complex processes and tasks. In most cases, he says, operators need to work on changing those processes entirely before they start to think about automating systems.

"Automation is not that difficult with the right foundation," he said. "Unless you establish that it becomes hard."

Like other telcos trying to reduce manual effort, Colt sees automation as a way of speeding up its time to market and making resources available for service development instead of fault resolution. As part of Novitas, its overarching network transformation project, it has already built an intelligence engine that takes advantage of so-called robotic process automation (RPA) to reduce the costs it incurs as a result of manual effort.

James Crawshaw, a senior analyst at the Heavy Reading market research business, describes RPA as one of three key aspects of intelligent automation. "It's software that can automate tasks like a macro does in Excel," he said during today's automation event. "Then you have machine learning, which can spot patterns and provide insights, and natural language processing, whereby computers understand human language."

While it remains early days for machine learning and natural language processing, Colt has also taken steps in the artificial intelligence area through a research project called Sentio. That initiative could help it to predict when network elements are about to expire, and allow it to reduce costs through more efficient network planning, according to Sabir. (See Colt Preps AI-Enabled Network Management.)

Colt has already been able to realize some of the benefits of automation through process changes, but Sabir says the operator has inevitably encountered some resistance among operations staff affected by the overhaul.

"Operational teams have been working for decades in a manual way and now we are saying you have to trust this engine to do the job you were doing manually," he explains. "We have had a big fight to convince the operations organization that the engine works and they can trust it."

"The more [operators] can automate the less people they will need," said Crawshaw. "But the staff that keep jobs will do more interesting stuff."

While industry executives often talk about the need to retrain existing telco staff as networks become more software-based, Sabir reckons that in-house programmers already have the requisite skills -- in many cases -- but spend most of their time on fixing faults rather than service development.

Asked about the impact of automation on jobs within Colt's operations organization, Sabir said: "For employees in provisioning activities and soft provisioning, absolutely the idea is to reduce costs in that area and that is an accepted reality."

However, Colt's operations workforce mainly comprises field technicians whose job is to install equipment, and Sabir does not expect automation to have much impact on these individuals.

kq4ym 11/16/2017 | 10:48:09 AM
Re: Trexit Getting over the stumbling block when it's a "big fight to convince the operations organization that the engine works and they can trust it," will probably be easier said than done until folks have enough experience to trust the results of AI, natural speech recognition and other new tech, so that the machines "earn their trust."
Reply | Post Message | MESSAGES LIST | START A BOARD

mendyk 11/3/2017 | 2:18:50 PM
Re: Trexit Agreed -- the work has to start somewhere. And at the root of that somewhere there needs to be a plan to get from the current mess to an optimal end result. As they say in sportsball world these days, trust the process. But to do that, you need a process to trust.
Reply | Post Message | MESSAGES LIST | START A BOARD

Definitely the fight should not be given up, I just think that you have to assume that it will not improve to start.  You can improve it even with humans involved.  Having forms that have data limits checkers and such can be of great value.  But I think for a really, really long time there will be error and the need for human intervention.

The best part is that the cleanup can be automated over time as well, or at least 80% of it.  If people run into situations on an ongoing basis that have a fix, they can build a cleanup task that runs periodically.  This can first report errors and then potentially automate the fixes for them.  Those kind of tools are what I have always called "1 Button Bobs".  One of the challenges is that SPs often spend little time in creating their own toolsets for this.  One way to justify it is to evaluate how much time is spent on cleaning up issues and then justifying the tool by the time reduction.  As a side benefit, service uptime and customer satisfaction are improved as well.

Duh! 11/3/2017 | 1:52:58 PM
Re: Trexit "[R]etrospectively cleaning up what is often a large amount of data entered over a very signifcant amount of time" is a huge problem for incumbents' copper networks. Some of the cables, cross boxes, and terminals out there pre-date business data processing (arch.).  The condition of those database records is downright scary.
Reply | Post Message | MESSAGES LIST | START A BOARD

mendyk 11/3/2017 | 1:33:27 PM
Re: Trexit The point is that process improvement is critical to any automation efforts. I don't think that surrendering the fight because it's a really hard one is the best option, and in fact it may be the worst one. As it is now, I've had a DirecTV account for more than 10 years now. My name on the account is spelled incorrectly. None of the humans I've contacted about this issue were able to correct it. So anecdotally, how much worse could a machine be than a complete fail?
Reply | Post Message | MESSAGES LIST | START A BOARD

All software is bug free and anticipates every situation.  So, the moment that AI figures out what should be made, how the business model will be executed, collect all possible data associated with it, process all data, never have any bugs, have no network or hardware failures...then it will be error free.

<Less Snark>  A lot of the issues deal with situations that are not completely planned for.  That makes a data model that requires support.  Think of it this way:  Imagine a Customer Database....now add in resellers and distributors....now have some of them go out of business or get bought by other resellers.  Who manages the commission checks?

mendyk 11/3/2017 | 9:47:26 AM
Re: Trexit It sounds like humans are responsible for the poor data quality, and humans are the only answer to dealing with that problem. But if data entry processes were more automated, wouldn't that go a long way to mitigating the "garbage in" problem? The garbage has to be dealt with at some point. It makes sense to do it in a way that aligns with automation plans.
Reply | Post Message | MESSAGES LIST | START A BOARD

fahim 11/3/2017 | 6:54:50 AM
Re: Trexit RPA is very sensitive to the smallest of differences in data unless it has been specifically built to handle every variant.  A human being can usally tell that "LON:1234,567" is "LON-1234-567" entered incorrectly.  Automation becomes horribly complex if you need to support every possible way that information has been manually entered and it's a war you never win because you are constantly discovering new ones (which you usually only find out about because an automation fails and a customer interaction has been sub-par).

The remedy to this is to ensure operational organisation understands that when the operational guide says enter the information as "XXX-NNNN-NNN" you need to religiously do that, and not some variant that may be obvious to any human eyes looking at it.  Helping them understand that RPA is very mechanical and requires consistency is really challenging, because you are asking people to break habits that they have built up over a number years (the 'but I've always done it like this' conversation).  This conversation becomes exponentially more difficult if you have to take local practices, especially those that are inorganically integrated, and align them.

There are two aspects here: retrospectively cleaning up what is often a large amount of data entered over a very signifcant amount of time, as well as constant governance that data quality standards remain very high for anything new that is enetered.  AI/ML and Big Data tools may be able to help with this but you don't get them for free, and avoiding 'garbage in' in the first place is usually a better strategy.