Is NFV Headed for a Cliff?

Imagine two people on a long road trip. One of them is very excited because he believes he has figured out a shortcut that will cut days from the journey.

But the other traveler disagrees. The problem, she says, isn't the route. The problem is the destination. They're driving off a cliff.

That's kind of the situation faced in the NFV community today. On the one hand, a group of operators calling themselves the Common NFVI Telco Taskforce (CNTT) -- including some of the biggest names in the industry, such as AT&T, Verizon and Telefónica -- believes it can rapidly speed up NFV adoption by standardizing on a few, simple infrastructure configurations.

However critics say the CNTT is solving the wrong problem. Critics say NFV is fundamentally broken, and fiddling around with specifications and standards isn't going to solve that problem. 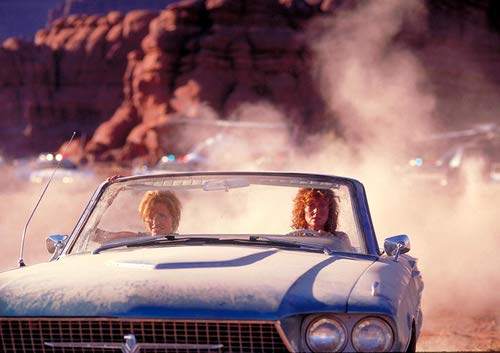 The Common NFVI Telco Taskforce (CNTT) is taking NFV on a new journey. Critics say the journey will end like Thelma & Louise.
Deep dive into real-world issues and virtualization deployment challenges with industry leaders. Join Light Reading at the annual Network Virtualization & SDN Americas event in Dallas, September 17-19. Register now for this exclusive opportunity to learn from and network with industry experts. Communications service providers get in free!

The Linux Foundation's Open Platform for NFV (OPNFV) organization has been developing standard configurations for NFVi and got a little overenthusiastic. They developed 60. That's too many for carriers to keep track of. And so the Common NFVi Telco Taskforce (CNTT) formed in February to simplify the number. The GSMA came on as host of the CNTT later, in collaboration with the Linux Foundation and OPNFV.

In addition to simplifying the number of configurations, the CNTT will develop OPNFV certification for VNFs on reference architectures.

Importantly, telcos are in the driver's seat, says Heavy Reading analyst James Crawshaw, who has been following the process closely. "You've got this chaotic situation today where, with the OPNFV project and ETSI NFV, their roadmaps are being dictated by the vendor community," Crawshaw says. "The group has been taken over by vendors because the operators do not have enough knowledgable people to take part."

The CNTT and GSMA are operator-driven, Crawshaw notes. Ten operators were on board CNTT as of April, and they are a roster of the industry's heavy hitters: AT&T, Bell Canada, China Mobile, Deutsche Telekom, Reliance Jio, Orange, SK Telecom, Telstra, Verizon and Vodafone.

"CNTT is finishing the job OPNFV should have done," Crawshaw says.

Going the wrong way
Critics say the GSMA is addressing the wrong problem. The NFVi isn't the problem. The problem is that NFV is too monolithic. NFV was designed to replace hardware appliances for network functions, but it reproduces the hardware's problems in software, critics say.

Modern networks need cloud software to meet the today's business and consumer demands for rapid deployment, scalability, flexibility and robustness. NFV needs to be replaced and rewritten with a more agile cloud infrastructure, suitable to the demands of emerging applications like 5G, say critics.

"Monolithic and cloud don't go together," says telecoms consultant Tom Nolle, president of CIMI Corp. and a longtime critic of the current direction of NFV. "If you want something to be elastic and cloud-ready, you have to break it into components."

In an era when software is moving to lightweight, containerized architectures that break down big applications into tiny microservices, NFV depends on heavyweight applications that run in virtual machines. Because of that architecture, NFV replicates the problems of vendor-dependent, hardware-based networks, even though NFV is software, Nolle says.

Nolle says the problem is that NFV is fundamentally broken. "It's never been on the right path and it's not going to be on the right path at this point," he says. NFV is designed from the bottom up, starting with functional diagrams. Instead, telco network software -- like modern software -- should be designed from the top down, starting with requirements and building downward to individual components, Nolle says.

A better architecture would be to focus on the desired outcome, which can then be implemented as virtual machines, containers, or in serverless cloud computing, depending on network needs. "Every process can make that decision individually," Nolle says. "But if I write MANO [Management and Network Orchestration] as a box rather than representing the logic, I have just written a monolithic piece of software that can be implemented in one specific way. I can't separate the process."

Because of the monolithic architecture, carriers have difficulty mixing and matching components from multiple vendors -- which was a major point of NFV when an alliance of Tier 1 carriers launched the architecture in 2012. VNFs from one vendor usually require NFVi from that same vendor.

To be sure, NFV has its success stories. For example, AT&T, Colt, Equinix and Turkcell have all recently discussed successful NFV deployments. Just this week, SES said it is implementing NFV on a satellite network for data communications.

But those successes are extremely limited, Nolle says. "If I get one guy ashore at Normandy, have I invaded?" Nolle says.

Next Page: The Path to the Public Cloud

theblogbase 2/6/2020 | 1:32:16 AM
Re You think you have what it takes to write some quality content then visit the page now and write an email to join one really good writer's community.
Reply | Post Message | MESSAGES LIST | START A BOARD

jamesp 10/25/2019 | 9:45:26 AM
I can't help but agree So much of the telecommunications infrastructure in the US is a monolithic relic. The giant industry "leaders" have so much technical debt and legacy built on top of these systems, that they refuse to make the necessary investments to provide a proper infrastructure for a better system.

I'm not sure if it is actually on its way out, but it should be!

Thanks for listening to my mini-rant!

Admitkard 9/24/2019 | 1:58:19 AM
Study abroad At AdmitKard we aspire to make global education accessible to every student through the application of digital data and analytics, so that the study abroad admission process becomes fun and hassle free. We believe that each student deserves an opportunity for a great career and we work towards building a future where the students are at comfort and ease while taking decisions related to higher education in a different country.
Reply | Post Message | MESSAGES LIST | START A BOARD

samuelddarden 9/12/2019 | 11:25:17 PM
grateful Your idea couldn't have most certainly been written any better.  forcecop keywords
Reply | Post Message | MESSAGES LIST | START A BOARD

hemotewal 9/8/2019 | 5:55:02 PM
qdfsd I essentially started three weeks past and that i makes $385 benefit $135 to $a hundred and fifty consistently simply by working at the internet from domestic. I made ina long term! "a great deal obliged to you for giving American explicit this remarkable opportunity to earn more money from domestic. This in addition coins has adjusted my lifestyles in such quite a few manners by which, supply you!". go to this website online domestic media tech tab for extra element thank you .
Click Here>>> 𝐰𝐰𝐰.aprocoin.𝐜𝐨𝐦
Reply | Post Message | MESSAGES LIST | START A BOARD

1. Starting with Thelma & Louise --- It was their own choice and decision to jump of the cliff, in opposition to the article's suggestion that their jump was because they went off track. Their Jump was a culture-changer and shaped a whole generation of feminism. That is exactly the role of NFV – and VNFs, if we insist to stick to the movie as a relevant allegory. Even if NFV is a jump from the cliff (which it can't be as we have mass deployments all over), it would be the pioneer and door opener for  the cloud native and virtualization era in Telco, as Thelma and Louise were for a new wave of feminism. Without NFV, telco's would not be able to move to the next stage of real cloudification.

2.  NFV/MANO  is architecture and concepts. Is the purpose of this article to judge about technical choice that telcos have made between VM-based vs microservices-based implementations?  You don't need to be a technical visionary to understand that microservices and Dockers software based are better solutions. Telco Cloud/NFV is 5-7 years behind private cloud technology, but with their existing  knowledge, resources and funds, this is the only track telcos and vendors could have taken to begin evolving cloud native capabilities, which was at that time was far from being close to maturity. NFV/MANO NFV does not limit the implementation. Therefore, being "monolithic" is not a mandatory definition by design or standard, but due to the decision to adopt "old" technology, while private clouds are able to move much faster.

3. Even though today's NFV implementations are not so dynamic or "server-less", as in private clouds, they are definitely not Monolithic. Also, Private cloud integration today is not a walk in the park, and is a challenge to all developers from any market. Compared to this, Monolithic is not such a bad word.

4. NFV use cases have never been meant to replace or compete with private clouds, business wise. Any comparison is not relevant and adds to the spaghetti. There are overlaps in technology, but it's not related to the strategy and investments done previously in building private clouds.