Now that the vote is over, the FCC's controversial Restoring Internet Freedom Order faces a new set of challenges. The court of public opinion has largely weighed in against the ruling, which repeals net neutrality regulations set in place under the 2015 Open Internet Order. However, the perspective of the country's highest court of law is still an open question, as is the majority viewpoint in Congress.

Federal Communications Commission (FCC) Chairman Ajit Pai and his fellow Republican commissioners believe they are on firm legal ground with their repeal of net neutrality rules. Pai's argument is that the Supreme Court decided in 2005 -- in the case of the NCTA et al versus Brand X Internet Services et al -- that the FCC can regulate broadband as an information service rather than a telecommunications one.

"At a very high level, number one, in terms of substantive law, there's no question that what we did was lawful," Pai asserted during a press conference after last week's FCC vote. "If you look at the Supreme Court's decision in Brand X, the majority of the Supreme Court expressly said that the FCC has the ability to classify broadband Internet access as a Title I information service." 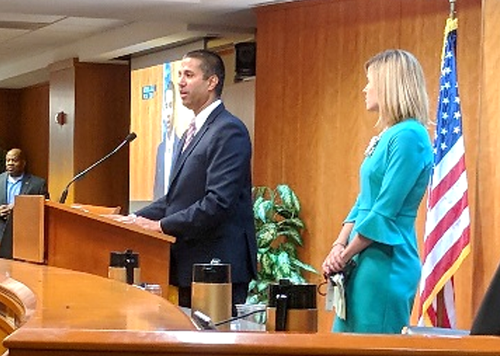 Pai is right. The Supreme Court did say in 2005 that the FCC could regulate ISPs under Title I of the Communications Act rather than as common carriers under Title II.

There's more to the story, however. In 2016 the US Appeals Court for the DC Circuit also declared separately that the FCC has the right to regulate broadband as a telecommunications service. Opponents continue to pursue an appeal of that Appeals Court decision, but when it was passed last year, it upheld the 2015 Open Internet Order. (See FCC Wins Key Net Neutrality Ruling.)

The question still unanswered is how the Supreme Court might rule today. Could the highest court determine that the Appeals Court effectively made the Open Internet Order the law of the land? Or is it more likely that the Supreme Court would fall back on the determination that the FCC has the right to decide at any time how broadband service should be regulated, thus supporting the decision of the current agency leadership?

As Republican Commissioner Brendan Carr pointed out during a statement prior to the FCC's vote last week, Title I classification of broadband "remains the only classification blessed by the Supreme Court." If and until the Supreme Court takes up the issue again, the FCC majority will use that argument as its legal basis for passing the Restoring Internet Freedom Order.

But what about Congress? The legislative branch of government could also choose to step into the fray with a law that supersedes the FCC's authority. Senate Minority Leader Charles Schumer (D-NY) has said he will do just that by forcing a vote under the Congressional Review Act (CRA) to overturn the latest FCC order. The Senator would need a majority of legislators to support his position in order to get such a vote passed, however, and it's not at all clear that such a majority exists.

Yet getting Republicans and Democrats to agree to anything in Congress is a tall order. Democrats will push to return to Title II regulation, but whether enough Republican lawmakers will support a move that directly counters the Republican-led FCC is still a big unknown.

There is yet another option. Congress could theoretically compromise with a bill that would maintain bright line net neutrality rules -- no blocking, throttling or paid prioritization -- but still classify broadband as a Title I information service. Financial analyst Craig Moffett has suggested that this may have been Chairman Pai's plan all along because it would give a perceived victory to both sides of the debate. (See Here's Pai in Your Eye.)

Such a move wouldn't satisfy many net neutrality activists, but it might be the only path forward in the current legislative environment.

And there's still one more wrinkle. There's a multi-state lawsuit in the works led by New York Attorney General Eric Schneiderman. Schneiderman contends that the process for debating net neutrality at the FCC was corrupted because of millions of fraudulent comments submitted to the agency and not subsequently investigated by FCC authorities. The New York Attorney General along with several lawmakers had requested a delay of last week's vote to study the matter further. With that request denied, it appears that Schneiderman may use the FCC's lack of investigation as a way to challenge the net neutrality vote on an administrative or procedural basis.

In summary, the only certainty for net neutrality is that lawsuits, legislation and court appeals will continue. For good or ill, the war for the Internet is far from over.

kq4ym 1/10/2018 | 11:05:27 AM
Re: 2015 Taken to Court??? Playing by the rules make take on vastly differing meanings because of how the "Rules" are defined, who made the rules, are the rules presumed to be fair and unbiased. The courts are going to have lots of arguments to judge over the coming years on this one.
Reply | Post Message | MESSAGES LIST | START A BOARD

You are comparing a life and death engineering situation to a best effort Internet Service.

Engineering has this thing attached to it - BUSINESS.  Technology not involved with BUSINESS is called Science.

If your rural wireless can't compete because Engineering it to compete with Wired Systems, then it will fail as a Business.  You better be prepared to throw a Gigabit at everyone, because that is your competition.  The fact that is not affordable does not make Comcast bad.  It makes them a winner in the race.  My Parents live in the territory of Hudson Valley Wireless - 10 miles outside of Schuylerville....and they can get Gigabit Cable.

So, if your technology can't deliver that...it is not the fault that the competitors can.  Because they can.  And as they continue to do, the other options will fade.

Joe Stanganelli 12/23/2017 | 9:42:49 PM
Re: 2015 Taken to Court??? Without addressing any of the other points, it's worth mentioning that FCC regulation of net neutrality precedes Tom Wheeler's chairmanship...going back to then FCC chair Julius Genachowski pushing through the 2010 Internet Order (which the judiciary struck down about 2 years ago, leading to the 2015 replacement order).
Reply | Post Message | MESSAGES LIST | START A BOARD

f_goldstein 12/23/2017 | 11:37:56 AM
Re: 2015 Taken to Court??? 7, you're falling into the trap of "best case engineering" again. The Space Shuttle took off lots of times before the Challenger blew up too. But the fact that something works sometimes does not mean it is properly engineered, or that better engineering should not be allowed. It is a failure of imagination to assume that the only progress left in internetworking is in what TV shows are on Netflix.

I'm designing rural fixed wireless netwokrs where the paths are pretty much all cluttered. Capacity is limited, and upstream connections to the backbone are expensive. Very different from my home Comcast connection. So we can't just throw a gigabit at everyone. And even if we did, loss-sensitive applications would lose packets too, if BESQR, because TCP uses packet loss as its rate control mechanism. Which is daft, but then a high and low gear pedal on the floor was good enough for the Model T, so why build better transmissions?
Reply | Post Message | MESSAGES LIST | START A BOARD

f_goldstein 12/23/2017 | 12:06:53 AM
Re: 2015 Taken to Court??? If you think all applications work well across the (wired) Internet today, you're living in a fantasy world. Most big services use CDNs to avoid the backbone, which is lossy - peering is lossier than cable or fiber access networks themselves. But people just don't try applications that are too sensitive to latency or jitter, and VoIP (this does NOT include PacketCable, which is VuIP, not VoIP) still sucks.

Of course if the only car you've ever seen is a Model T, and you used to ride a horse, you will imagine that your car is perfect and why are people trying to make new ones?

IETF types and "technical" hard-core neutrality advocates (vs. nondiscrimination advocates) are like the Institutional Revolutionary Party, conservatives living in the glory of a long-ago revolution that has fossilized.
Reply | Post Message | MESSAGES LIST | START A BOARD

So, all these applications work today - so it no prioritization is required unless there is congestion.  My comment relates to that if you are going to pay for prioritization, then there needs to be a value attached to it.  If today, 90% uptime on services is what we get..then I want to pay only for 100% uptime.

Your version exists today in mobile where people don't count content against caps.  That is favored content.

f_goldstein 12/22/2017 | 6:27:26 PM
Re: 2015 Taken to Court??? "Paid prioritization" is a meaningless buzzword. If you don't know about networking and the different requirements for different applications, you'll assume that the Internet is perfect and anything that differentiates "stuff" must be evil. But that's loco. TCP/IP is senescent technology and needs all the help it can get. What would be problematic is unpaid prioritization of favored content, vs. a paid model open to anyone willing to pay.

So of course VoIP should have access to short queues with low jitter and high priority. And of course 4KTV may need to be (watch out, here's another buzzword that drives the NN crowd nuts) throttled a bit to make room for anything else. And of course applicatons that wake up 20 TCP/IP streams to get an unfair advantage in SlowStart, or those who use UDP and just jam through without slowing down, should be penalized. That is what keeps the whole rickety contraption working! "Best Efforts" (scare quotes required) only works well for some applications, and depends on either cooperation or policing.

What Pai, like Powell, got wrong was not opening up the actual underlying telecommunications media (cable, fiber, DSL) to common carriage, which would have allowed competition among ISPs. That, not regulation, is what got the Internet going in the first place, and what other countries still have.
Reply | Post Message | MESSAGES LIST | START A BOARD

Paying to have a higher rate does not equal paid prioritization.

Your basic assumption is that the source will do a good job of shaping the traffic to the end destination's bit rate.  It will - sort of - over time and even then that will have problems.

But let's use FiOS as the example.  In the downstream direction (towards you), you share a common pipe.  All the date shows up at the packet queues (really they are frame queues, but hey nobody talks like that) when they do.  Data exits in a FIFO - First In, First Out.  TCPs backoff will slow things down over time.  In paid prioritization, there are multiple queues and they are scheduled (algorithms vary here and can have very different results).  In general, the higher priority (read paid for) queues go first.  The lower queues will get "some" bandwidth.  But again, that may contain many people's data.

But here is my point.  If you paid for a higher quality stream and your buffering didn't go away, then why buy it?  What the large ISPs want to do is to get you to pay more for bits you care more about.  They are trying to raise the $ per delivered bit per second.  With today's scheme, you get "best effort".  You get what you get.  Paying for a higher bit rate, may or may not make your efforts better - because your neighbors can be occupying lots of the bandwidth.