Net neutrality proponents are on a mission to block the rollback of the FCC's 2015 Open Internet Order. Yet in an online protest scheduled for today, an unlikely late entry has added itself to the ranks of participants. AT&T, which very much supports overturning the FCC's order, says it is "joining the 'day of action' in support of an open Internet." 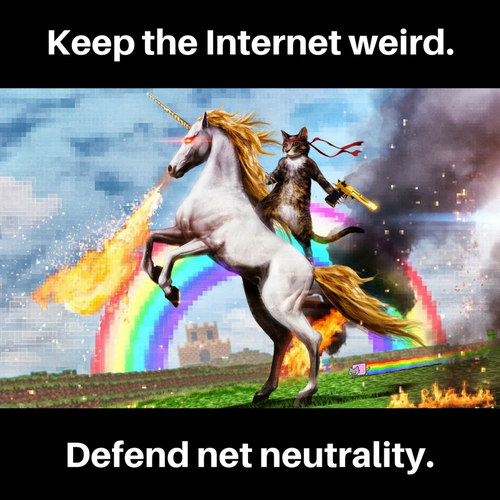 The organization Fight for the Future made several graphics available for today's protest, including the one above.

Once again for those who are new to the debate (or have willfully ignored it so far), there are two issues on trial in the arguments over the Federal Communications Commission (FCC) 's ruling from two years ago. One is net neutrality, or the idea that there should be no blocking, throttling or offering of paid prioritization for Internet traffic delivery. The second is the classification of Internet service providers as Title II common carriers. As the law stands, the FCC cannot regulate ISPs unless they fall under Title II of the Communications Act. So, the reasoning goes, the FCC needs to classify Internet providers under Title II to enforce net neutrality rules.

Most ISPs claim to be in favor or net neutrality, while also condemning Title II classification. Comcast Corp. (Nasdaq: CMCSA, CMCSK), in fact, has run regular ads to that effect. But no service provider before has attempted to co-opt the net neutrality fight in quite the same way as AT&T Inc. (NYSE: T). (See Net Neutrality: Before the Vote)

To put the move in perspective, AT&T is among the parties currently working through legal channels to get the Supreme Court, if needed, to review a decision by the DC Circuit court that upheld the Open Internet Order. Several organizations, including AT&T, the United States Telecom Association (USTelecom) , the NCTA  The Internet & Television Association and the American Cable Association (ACA) , filed a petition just this week asking for a two-month extension from the Supreme Court on the time allotted to file for a writ of certiorari in the case.

In layman's terms, that means the parties want to be able to send a full record of the case to the Supreme Court for review, but only if it proves necessary after another 60 days. In that time, telecom industry representatives hope that the FCC will have reviewed public comments and returned ISP classification to that of an information service rather than a Title II common carrier.

Despite AT&T's participation in legal proceedings against the Open Internet Order, however, the company says it is joining today's rally to protect an open Internet.

Net neutrality advocates are not amused.

Meanwhile, the list of companies supporting the net neutrality day of action in earnest has continued to grow. According to Fight for the Future, Snapchat, Airbnb, Spotify, Yelp and Dropbox recently joined the protest ranks.

Other large companies, including Amazon.com Inc. (Nasdaq: AMZN), Netflix Inc. (Nasdaq: NFLX) and Twitter Inc. , are also part of the effort, although, like several other participants in today's event, their outrage is somewhat understated. Netflix includes a banner at the top of its homepage, and Twitter has promoted #NetNeutrality at the top of its list of trending hashtags. Both signs are visible, if not commanding of attention. Amazon, however, doesn't have any net neutrality language immediately apparent on its site.

KBode 7/13/2017 | 8:32:32 AM
Re: NFLX Of course that said, this "participation" in a protest designed to protect net neutrality by AT&T -- a company relentlessly dedicated to crushing consumer protections at every opportunity -- is almost high art.
Reply | Post Message | MESSAGES LIST | START A BOARD

KBode 7/13/2017 | 8:31:50 AM
Re: NFLX "Netflix has been very active on the lobbying and legal side of things where the Open Internet Order and related activities are concerned."

They've actually been pretty quiet this go round. Like Google, once these companies get big enough to buy their way out of trouble, they start to see net neutrality as SOP (somebody else's problem).

Joe Stanganelli 7/13/2017 | 8:00:00 AM
NFLX While not coopting large portions of its site with #NetNeutrality language (which, if we look at it from the perspective of someone who just wants to get their Netflix fix, would be a mistake anyway), Netflix has been very active on the lobbying and legal side of things where the Open Internet Order and related activities are concerned.

Of course, on that end, Netflix is just as financially motivated on the one side as the carriers are on the other. (Indeed, the only reason we're having this debate at all -- where once we condemned people who consumed copious amounts of Internet video as the neighborhood porn fiends -- is because consumer video over the Internet has taken off so greatly.)
Reply | Post Message | MESSAGES LIST | START A BOARD
EDUCATIONAL RESOURCES
sponsor supplied content
Heavy Reading Report - The Journey to Cloud Native
IDC Whitepaper: Key Considerations When Operationalizing Artificial Intelligence Strategy
The State of Fixed-Mobile Convergence
Blog: How Telefónica is evolving its OSS to support network automation
Blog: The benefits of Edge Computing
Scalable, cloud-native 5G open RAN is now a reality
Using AIOps solutions in the telecoms industry: a market assessment
Re-Architecting the Broadband Network Gateway (BNG) in a Network Functions Virtualization (NFV) and Cloud Native World
Educational Resources Archive
More Blogs from MariNation
Time for an Edge Computing Reckoning