Strange as it might seem, Huawei's international tribulations may bear some responsibility for the growing interest in a more open radio access network (RAN).

As security hysteria drives countries to excommunicate the once-indomitable Chinese company, telecom operators are left with fewer alternatives than ever before. Their dependence on a shrinking number of industry titans has made them push even harder for more "open" technologies -- and especially for a radio access network (RAN) without a dominant supplier. (See DT's Dinner With Huawei Could Become Dog's Breakfast and Major Telcos Pool Efforts to Slash 5G RAN Costs.)

The battle over the RAN could topple empires.

Some form of open RAN could soon become a reality. Yet its genesis has been turbulent, and its outlook is fraught with uncertainty. Critics with an open RAN agenda say Huawei Technologies Co. Ltd. and Ericsson AB (Nasdaq: ERIC), the world's biggest mobile kit vendors, tried to smother it at birth, nursing an alternative that promised far less freedom.

Ericsson, for its part, says focusing on other 5G technologies was deemed more important at the time, and insists it is no enemy of the open. But while the Swedish vendor has now enrolled in the main club backing open RAN developments, Huawei remains conspicuous by its absence. Even with the support of the world's largest operators, can an open RAN thrive amid such conflict and competing interests?

A brief history of open RAN
Today, the RAN is not only one of the costliest parts of a telco network but also one of its most restrictive. Although any RAN should talk to any smartphone, or to any transport network, the major components of a RAN must come from the same vendor's system. Buy signal-processing equipment from Ericsson and you also need its radios, or those of an Ericsson partner. Trying to build a RAN from different vendor systems is like piecing together a jigsaw from incompatible sets. It simply won't work.

The blame for this situation falls heavily on a maligned technology called CPRI (which stands for common public radio interface). It is CPRI that handles the connections between the signal-processing equipment (called baseband, in the industry) and the radios in what operators call the "fronthaul" part of the network. But there are so many variables with any CPRI implementation that operators are forced to work in one vendor's system. It is effectively a proprietary tool.

Ending this "lock-in" meant coming up with an open alternative to CPRI that would accommodate new demands for network design. In a typical 4G network, the baseband and the radios both live at the towers, with CPRI connecting them over a short distance. Rehousing the baseband in centralized facilities could bring benefits in future. But moving network functions into those centralized baseband units is far from straightforward, largely because of the increased fronthaul distance.

This "functional split," determining which functions go into baseband and which should be done at the radio site, has been at the crux of the open RAN debate. After considering a menu of splits, standards bodies like the European Telecommunications Standards Institute (ETSI) and the 3rd Generation Partnership Project (3GPP) had settled on two, according to John Baker, senior vice president of business development for Mavenir, a software company hoping to profit from a more open RAN. At opposite ends of the split spectrum, each had its pros and cons. (See Is vRAN Still Too Hot to Handle?) 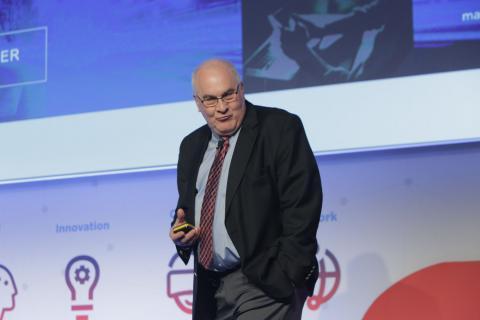 Mavenir's John Baker is one of the high priests of the open RAN movement.

The first, Option 2, would push many of the network functions into the radio unit. While this higher-layer split might help to reduce transport costs, it could also increase the signaling delay, making it unsuitable for latency-sensitive applications such as gaming and virtual reality. With Option 7, the lower-layer split under serious consideration, nearly all functions would shift into the baseband. That should assist with resource allocation to users, and boost performance, but it would also put more pressure on the fronthaul.

The most ardent supporters of open RAN saw reasons to favor Option 7, according to Baker. By leaving hardly any functionality in the radios, this would simplify the hardware requirements and help cultivate a market for "white box" radios -- standardized kit that operators could buy "off the shelf," like tools at a DIY store. Option 2, by contrast, seemed to reinforce the vendor lock-in. "It puts a lot of functionality into the radios and so they are still proprietary," says Baker.

Next page: It's just not cricket