MWC Visitor Numbers Fall: So Has It Hit Its Peak?

Has Mobile World Congress hit its peak? That's the question the show's organizer, the GSM Association, and others will be asking today as news emerged that around 107,000 visitors were at this year's event -- 1,000 less than in 2017.

The GSMA, which also acts as a lobby group for the mobile operator community, had been aiming to beat the 2017 figure of 108,000 visitors and record a ninth successive year of growth.

With 107,000 visitors, MWC remains by far the biggest tradeshow dedicated to the telecom industry and has seen visitor numbers rise significantly from 47,000 in 2009, the last year in which it suffered a decline. 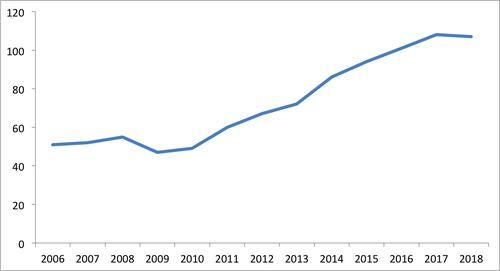 But the slight drop in numbers this year will likely raise concern that MWC may have peaked in terms of attendee numbers. It could also prompt the question: Is the show's influence waning? (See How Long Before We Hit Peak MWC?)

The fact remains that a large and significant rump of the communications networking industry heads to Barcelona each year to do business, conduct meetings and check out what's new. While visitor numbers might have slipped slightly, this is still the must-attend event for most in the industry.

That said, with the convergence between telecom and other parts of the wider technology industry, the show now faces competition from events such as the Consumer Electronics Show (CES), held in Las Vegas every January.

CES recorded 184,000 visitors this year and is now seen as "the event that defines the industry" by John Strand, an analyst and consultant.

Moreover, many of the operators and vendors that back the GSMA have been slashing headcount as they automate and digitalize their operations, giving the MWC a smaller addressable audience than in years past.

In addition, a number of attendees who spoke with Light Reading staff at the event questioned how useful and relevant the event's generic conference sessions are in helping to educate and inform attendees. Others said that giving operators the chance to whine about regulatory regimes and pressure was of little value.

As telecom has converged with other industries, MWC has flourished by appealing to the organizations now taking advantage of high-speed data connectivity. Carmakers, healthcare specialists and robotics firms have all been visible in recent years, as major industry verticals become strategically reliant on cloud and communications technologies for their own innovation.

Yet the show has arguably been a victim of its own success. With its sprawl, spin and lack of focus, it has become an event that some industry people now feel provides little tangible benefit. Despite this, most critics still attend: The networking opportunities, at the very least, provide more than enough value for the time and expense of heading to Barcelona. Dean Bubley is one high-profile industry analyst who says he no longer makes the trip. But he is in the minority.

This year's show also lacked much in the way of groundbreaking news, according to a number of attendees who spoke with Light Reading. Worried their announcements will get lost in the noise, many companies now prefer to hold press events in the run-up to the show, or even on the Sunday before it starts, elsewhere in Barcelona.

Deutsche Telekom AG (NYSE: DT) remains the only big European operator that holds important press events at the show itself, providing an update on its own 5G strategy as well as that of US subsidiary T-Mobile. (See DT Will Start Commercial 5G Trials in 2018 and T-Mobile to Roll Out 5G in 30 US Cities in 2018.) German goalkeeper Manuel Neuer proves a safe pair of hands for Timotheus Höttges, Deutsche Telekom's CEO, and Claudia Nemat, its board member for technology, during an MWC demonstration of the operator's new inflight phone service.

With the current political turmoil in Catalonia, there has also been speculation that organizers might try to move the event to another city. The GSM Association (GSMA) last year launched an MWC Americas show that attracted 21,000 visitors in San Francisco: It has already outgrown that city and will move to Los Angeles later this year.

Vodafone's Colao told reporters that he would not support plans for a change in venue. "The [political] situation is delicate and cultural and I cannot comment but I think it is the right place," he said at this year's show. "Barcelona and Mobile World Congress have to stay together." He is not alone in that sentiment.

The GSMA, of course, chose to highlight the positives, revealing that 7,700 CEOs attended this year's show, up from 6,100 in 2017. (Ed note: if the industry keeps slashing jobs at its current rate, the CEOs will be the only people left...)

There was also a slight increase in the proportion of female visitors: 24% of attendees were women this year, up from 23% in 2017, noted the GSMA.

kq4ym 3/14/2018 | 10:24:07 AM
Re: Quality versus quantity The thousand or so drop in attendance would to me seem to not necessarily be a prediction o the future. It's only about a one percent drop, and who knows what that might be resulting from. But the next few years will probably tell the tale a little more accurately.
Reply | Post Message | MESSAGES LIST | START A BOARD

VicePres56347 3/9/2018 | 1:52:57 AM
Cuts not relevant I don't see the cuts that telcos are making as in any way relevant to the insignificant decline in attendance at the event; the cuts are not at the VP / SVP / CxO level that typically attend this event. I saw more carrier CxOs (even from Asia!) at CES this year than I've seen in years past; you may be right that the increased convergence is driving a split in attendance, sending more people towards CES.

mendyk 3/4/2018 | 4:10:25 PM
Re: Quality versus quantity Glengarry indeed. For a few years now, exhibitors at MWC have complained about the lack of leads coming out of Barcelona. Some have cut back on their spending. But it's still the single most important show for telecom. And marketing types seem to love Barcelona, even in late winter.
Reply | Post Message | MESSAGES LIST | START A BOARD

sarcher60555 3/4/2018 | 1:42:23 PM
Re: Quality versus quantity MWC is the biggest marketing budget drain for companies in the Telecom space.  Those groups live for the week-long party.  Leads are doled out after return to the safety of HQ. "These are the new leads. These are the Glengarry leads. And to you they're gold, and you don't get them. Why? Because to give them to you is just throwing them away. They're for closers."
Reply | Post Message | MESSAGES LIST | START A BOARD

mendyk 3/2/2018 | 2:16:10 PM
Re: Quality versus quantity Right -- MWC is a marketing-driven event. But most trade shows are. The substantive stuff takes place out of the limelight. Meanwhile, though, hundreds of millions of dollars/euro/whatever get funneled into "the local economy" and GSMA, some of which trickles down to real people. And those who are employed in marketing departments have lots of work, even if the result of that work is negligible.
Reply | Post Message | MESSAGES LIST | START A BOARD

rocket101 3/2/2018 | 1:38:23 PM
Re: Quality versus quantity In addition, a number of attendees who spoke with Light Reading staff at the event questioned how useful and relevant the event's generic conference sessions are in helping to educate and inform attendees. Others said that giving operators the chance to whine about regulatory regimes and pressure was of little value.

The above sums up all. 5G is not ready, so what exactly is MWC achieving? Just announcement of who will be come out with 5G and when and wine and dine? To top it, is Spain (Barcelona) at the forefront of mobile technology? Is Spain playing any role in 5G?
Reply | Post Message | MESSAGES LIST | START A BOARD

mendyk 3/2/2018 | 11:29:52 AM
Tweet The fact that you could fit any important news from this year's MWC in a single Twitter post isn't going to help. But we know that most companies -- including ours -- are going to be slow to cut back on MWC until they see others doing it.
Reply | Post Message | MESSAGES LIST | START A BOARD

FastCache 3/2/2018 | 9:36:04 AM
Quality versus quantity Any event that can pull in over 100,000 people including senior executives from many of the top companies in the industry is noteworthy.

While the largest of the MWC events, there are also regional MWC themed shows in the calendar and to some extent these have displaced some of the older telecoms themed shows.

I think that there is a debate whether Barcelona longer term is the ideal venue for MWC.

All involved with MWC will no doubt take stock from this years event and will be planning for a high quality MWC2019 a year from now.
Reply | Post Message | MESSAGES LIST | START A BOARD
EDUCATIONAL RESOURCES