German network operators are still not able to provide 5G services because regulatory authorities have yet to allocate the spectrum that was auctioned for 6.5 billion ($7.3 billion) in mid-June, according to Timotheus Höttges, the CEO of Deutsche Telekom.

The admission there are still no 5G subscribers on the German incumbent's 5G network followed a "launch" announcement in early July, when Deutsche Telekom unveiled details of pricing plans for the next-generation mobile technology.

Answering questions about the status of the operator's 5G service during a phone call with reporters this morning, Höttges said: "It is fairly complicated to get off the ground here without spectrum. We are still waiting for the spectrum to be allocated. Rest assured that we are working flat out to set up sites all over Germany. We have already communicated the relevant rates. We have two 5G devices out there in the market."

The Deutsche Telekom boss denied the licensing situation put Deutsche Telekom at any kind of disadvantage to Vodafone, which announced its own 5G launch in Germany in mid-July. "We don't think we are either ahead of the competition or lagging behind," he said in response to questions. "I hope before long we will get the licenses we need for our antennas and then everyone will be able to use the related super services."

Ready or Not, Here I Am 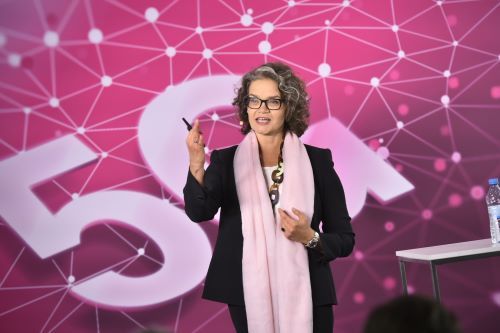 Claudia Nemat, Deutsche Telekom's board member for technology, speaks at a 5G "launch" event in July.

Vodafone did not take issue with Höttges' complaints about the licensing situation but said it was using frequencies it previously obtained in a private transaction. "For 5G in Germany, Vodafone currently uses existing frequencies in the 3.5GHz range that are already available to us," said a spokesperson. "We purchased these frequencies in 2018."

According to Vodafone's statement on the recent award of 5G licenses, it holds a 42MHz block of spectrum in this frequency range that it will "relinquish" on receipt of the 90MHz it secured during the government auction. Light Reading was seeking further clarification at the time of writing.

The details suggest Vodafone has a 5G headstart over its chief rival but raise questions about the wider availability of 5G services in Europe's largest economy.

Operators in Finland, Italy, Spain, Romania, Switzerland and the UK now claim to have switched on 5G networks and German stakeholders will not want to see their country fall too far behind others if an early lead attracts entrepreneurs and technology companies and provides an economic boost.

Höttges insisted that his company would be in a strong 5G position once spectrum is allocated. "We have better sites and the right spectrum positions that will also help us, and therefore, I am very confident," he said. "Eighty percent of all our sites are 5G-enabled and are just waiting for spectrum to be allocated."

"We're open to US settlement"
The update came as the German telco reported a strong set of results for its second fiscal quarter, recording sales growth at all its major units bar the T-Systems IT unit, which is being restructured in the latest turnaround effort.

Overall sales rose 7.1%, to nearly 19.7 billion ($22.1 billion), and earnings (before interest, tax, depreciation and amortization) were up a fifth, to 6.7 billion ($7.5 billion), compared with the year-earlier period. Boosted by takeover activity in Austria and the Netherlands, Deutsche Telekom put the "organic" rate of growth at 3.2% on the sales side. Net profit soared 90.7%, to 900 million ($1 billion), after the costs of an arbitration dispute weighed on last year's figure.

As usual, Deutsche Telekom had its high-flying US business to thank for most of the sales growth. Adding 1.8 million customers in the second quarter, T-Mobile -- the third-biggest US operator -- finished June with 83.1 million subscribers and saw revenues increase 5.1%, to $11 billion, compared with the year-earlier period.

Höttges expressed optimism that a long-in-the-works merger with number-four player Sprint would secure final approvals, despite opposition from authorities in several states. "Federal institutions have basically agreed to this transaction [but] these states have taken legal action and so the final stage in the approvals procedure is underway," he said. "We are assuming that the trial will start on December 9 and are open to a settlement. We are confident we'll prevail because our line of argumentation is sound."

Opponents say the deal will trigger job losses and reduce competition, despite promises by Deutsche Telekom and the sale of assets to TV company Dish Network, which plans to build a fourth 5G network. Höttges said the combined Sprint and T-Mobile would be able to put more pressure on rival operators -- including AT&T and Verizon as well as US cable operators -- and speed up the construction of a 5G network.

Deutsche Telekom claims to be outperforming its German rivals, but it now faces a much stronger Vodafone after that company recently bought cable assets including Germany's Unitymedia from Liberty Global in an 18.4 billion ($20.6 billion) deal.

Höttges is consequently eyeing further cost-cutting measures, including possible store closures, as he prepares for tougher German competition. Having previously told regulators to block the Vodafone-Liberty deal, arguing it would create a new TV monopoly in some areas, he today urged German authorities to maintain pressure on the rival operator. "I am assuming that policymakers are expecting Vodafone and Liberty to not only upgrade their old network with coax but also invest in FTTH and that politicians are hoping Vodafone and Liberty will share the burden of providing coverage in rural areas as well," he said.

T-Systems restructuring
In a major restructuring move, the German operator has revealed plans to bring the telecom services part of T-Systems into Telekom Deutschland, its consumer-facing business in Germany. Under what remains of T-Systems, it will also create two new independent legal entities to address opportunities in security and the "Internet of Things."

"It is somewhat unnatural," said Höttges in commenting on the existing T-Systems structure. "For example, when we negotiated with the government we did it through T-Systems, but support was through Telekom Deutschland We've pooled telecom services where all products will be developed in one product house and there is an integrated distribution system to market these."

T-Systems revenues were stable in the second quarter, at about 1.67 billion ($1.87 billion), compared with the year-earlier period. Despite a year-on-year improvement of 0.5 percentage points, the adjusted operating margin remains just 1.9%.

Across the operator's various European subsidiaries outside Germany, revenues rose 2.8%, to nearly 3 billion ($3.4 billion), thanks mainly to merger activity. Earnings rose 14.4%, to about 1 billion ($1.1 billion), due partly to cost savings.

Those included headcount reductions, with Deutsche Telekom slashing more than 2,100 positions across Europe in the first six months of the year, or about 4.4% of the entire European workforce (outside Germany). Total group headcount fell 1.4% in the first half, to 212,762 at the end of June.

It recorded about 1 billion ($1.1 billion) in spectrum fees in the first six months of the year, up from just 137 million ($154 million) a year earlier.

Clifton K Morris 8/8/2019 | 9:26:38 PM
Living with Tim Höddges: Two Futons and a couch arms-length distance from a popcorn machine. In the scope of the US Settlement, I think the DoJ conditions dont go far enough. Texas Attorney General, Ken Paxton made it extremely clear that the divestitures required by DoJ amount to little more than a 7 year lease/rental of T-Mobiles network. During this DoJ mandated timeframe, T-Mobile will be able to report Dishs subscriber base as un-branded customers.

Essentially, DoJ created a MintSIM or perhaps a WalMart MVNO equivalent as a reason to not enforce Anti-Trust.

These same issues will be prevalent with Altice and other MVNO contracts which T-Mobile is bound to and will survive the acquisition.
Reply | Post Message | MESSAGES LIST | START A BOARD
EDUCATIONAL RESOURCES