The company has developed a different way of rolling out NB-IoT LTE networks, using geostationary communications satellites to connect numerous Skylo Hubs (or gateways) on the earth. The hubs are 8-by-8-inch boxes that can be installed on fishing boats, in railway carriages, as well as other machinery, Skylo says.

"We asked, 'What would it take to create a global fabric of connectivity for machines?'" co-founder and CEO Parthsarathi Trivedi tells Light Reading. 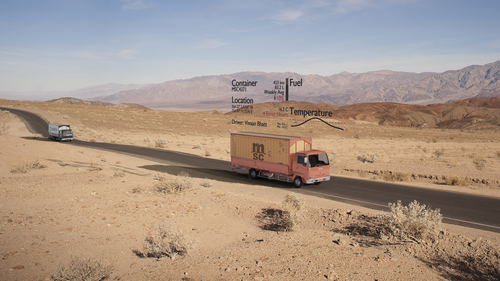 Trucking is one of the industries that Skylo imagines its product could be used in.
(Source: Skylo)

The startup was founded in 2017 and has offices in San Mateo, California, Tel Aviv, and Bangalore, India. The company has been funded to the tune of $116 million by SoftBank Group, DCM and Innovation Endeavors, a VC firm from former Google CEO Eric Schmidt.

"To truly build a ubiquitous network it's got to be satellite-based," Trivedi says. So far, Skylo offers minimal detail on the satellite systems or the Skylo hubs that support the NB-IoT network. Trivedi says the network operates on "standard 3GPP-defined bands in addition to specific satellite MSS bands."

The CEO also says the satellites don't require the installation of additional equipment to bounce the NB-IoT signal down to the hubs on the ground. "Think of them like a mirror," Trivedi says of the satellite's role in the new network.

Skylo claims to cost 95% less than existing satellite solutions, with connectivity starting at $1 per user and hardware that costs less than $100. The company describes itself as "building the most affordable and accessible network to mobilize the world's machine data."

State-owned Indian telecommunications company BSNL is working with Skylo on the IoT technology. Some of the early work between the two involves using Skylo's network to get real-time text messages from polling stations in Shella, India.

Skylo has also tested its pre-launch network in fishing boats off the Indian coast.

Why this matters Skylo has upped the ante by developing a machine data network that can work globally. There are already cellular NB-IoT LTE networks operating in many locations: In 2020, countries like India are coming online with machine-to-machine (M2M) technology from carriers that include Airtel, Reliance Jio and Vodafone Idea.

Meanwhile, startups such as Helium and Nesten have started to deploy nationwide machine data networks to rival cellular IoT in the US. These do-it-yourself user-installed IoT networks typically use the Long Range (LoRa) protocol to transmit and collect machine data, earning their users bitcurrency for doing so.

Now Skylo says it will start to take NB-IoT worldwide using its satellite and low-cost hub system early in summer 2020, beginning in India. Trivedi says Indian Railways will be its first customer: The rail service will roll out Skylo hubs in carriages across its nationwide network. Following that, Skylo plans to launch in Southeast Asia.

And Skylo isn't alone. Ligado Networks in Virginia says it is also looking to build a satellite network partially using the NB-IoT standard in the L-Band (1500MHz to 1700MHz). Luxembourg-based OQ Technology has tested NB-IoT radio procedures on software-defined radios on a couple of commercial satellites this year.

The Skylo scheme appears to be the most ambitious NB-IoT program yet, combining satellites with inexpensive gateways to create a potential global machine data network that can get farmers, fishermen and others connected to a network where they weren't able to connect before.

McJacob 1/22/2020 | 6:56:18 AM
Web Development We want to develope a new website for our . Our mission is to promote tourism all over the world through our web portal. So we need technical help to develope a desktop and mobile friendly website. here is the old design of our website.
Reply | Post Message | MESSAGES LIST | START A BOARD

How is it ubiquitous NB IoT if you have to lug the base sation and power supply around with you?

Ubiquity can only come from a direct to satellite model.
Reply | Post Message | MESSAGES LIST | START A BOARD