We love Larry Ellison. He trash-talks competitors, they fire back and everybody has a good time.

By Ellison's standards, his criticism of Splunk was mild. Ellison introduced new automated security capabilities in Oracle Management Cloud, based on machine learning from log data. He said Oracle's solution is far superior to Splunk's.

"They do a pretty good job," he said at a Tuesday keynote. Splunk invented log analytics, Ellison said. 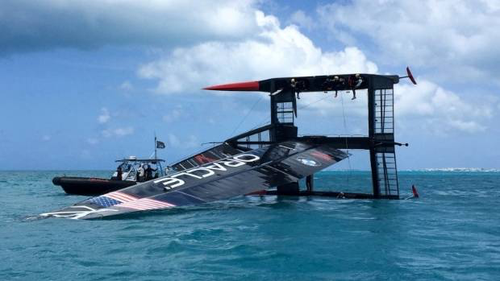 Merritt includes this photo in his response to Oracle criticism.
Keep up with the latest enterprise cloud news and insights. Sign up for the weekly Enterprise Cloud News newsletter.

He begins, "They say imitation is the sincerest form of flattery, so it was flattering that Oracle finally woke up to the power of machine data and the importance of security... "

But Oracle demonstrates a "fundamental lack of knowledge and understanding of the security market," Merritt says.

Security "requires a community to support those amazing cyber warriors that live on the front lines daily. It's not time for rhetoric from a company with a record of under serving and gouging their customers," Merritt says.

Merritt took aim at Oracle's architecture: "Like all database oriented people, your solution to building an integrated view of a complex situation is to centralize all the data into a single store. The scale and speed of today's universe of millions of data feeds make that approach a non-starter." Splunk customers are indexing petabytes of data daily for multiple use cases, Merritt said.

Merritt responded to Oracle's assertion that Splunk requires data scientists for machine learning: "Just wrong," he said. Anyone in IT can use Splunk, although the company does also offer tools for data scientists, he said.

He adds: "Finally, we'd like to just offer some (more) help. We've been bringing machine data from trains, planes and automobiles into Splunk for years. We can bring in boat data as well. There's a free cloud trial of Splunk that could help you analyze the Oracle yacht data. We realize it's a bit late for that this year."

Merritt concludes, "We're happy to help you try and win the America's Cup back next time you compete."

danielcawrey 10/5/2017 | 3:00:13 PM
PR Ellison is a master of PR. His abrasive style gets headlines. That's how I know he'll never stop. It works!
Reply | Post Message | MESSAGES LIST | START A BOARD
EDUCATIONAL RESOURCES