Alphabet's Cybersecurity Moonshot: It's Deja Vu All Over Again

An Alphabet subsidiary's goal to build a digital "immune system" against cyberattacks makes the company the latest of several trying to use this approach to solving enterprise security problems.

Alphabet Inc. , best known as the parent company of Google (Nasdaq: GOOG), has graduated a security company from its X "moonshot factory" business unit, with the goal of building a digital "immune system" against threats. It's a strategy similar to several competitors, ranging in scope from Cisco to at least one startup.

The new Google subsidiary, named Chronicle, will provide a cybersecurity and analytics platform to "help enterprises better manage and understand their own security-related data." Chronicle will also offer VirusTotal, "a malware intelligence service acquired by Google in 2012 which will continue to operate as it has for the last few years," Chronicle's new CEO, Stephen Gillett, said in a post on Medium Wednesday.

The proliferation of security alerts makes it harder for enterprises to follow up on all but a small fraction of generated alarms, allowing attackers to go undetected for months. And security teams need "months to fully understand what's going on once they've detected an issue," Gillett says. "All this adds up to more data breaches, more damage and higher security costs." 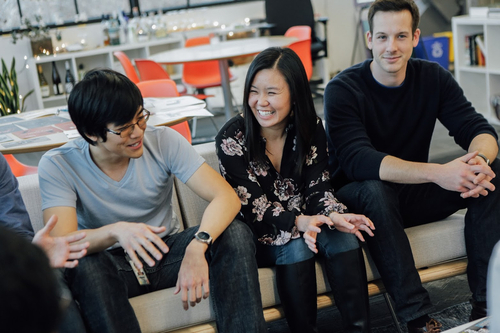 Some of the Chronicle team, looking as wholesome and happy as women laughing alone with salad. Photo by Chronicle.
Keep up with the latest enterprise cloud news and insights. Sign up for the weekly Enterprise Cloud News newsletter.

Chronicle is looking to multiply the speed and impact of security teams' work using its intelligence and analytics tools, leveraging Google's own high-performance and highly scalable platform, and machine learning and search tools, Gillett says.

Chronicle was founded as an X project in February 2016, Gillett says.

Gillett joined X from Google Venture and was previously COO of Symantec.

Instead of reacting to threats after they happen, Chronicle's goal, "which is still several years away, is predicting and deflecting cyber attacks before they infiltrate an organization's network"  a digital "immune system," Astro Teller, self-described "captain of moonshots" at X company, writes. Like the body's immune system, Chronicle's security protection would detect abnormalities and block them before they graduate to attacks.

Chronicle's digital "immune system" approach isn't original. But so what? The key to success isn't the idea, it's the execution. And Alphabet's talent, infrastructure and capitalization make it a good candidate for being the cure to the cybersecurity disease.

[email protected] 1/31/2018 | 2:56:14 PM
Re: Beat the bad guys We can only hope there seem to be so many ways to breach information and even onsite breaches are on the uptick. Have you seen the latest ATM nightmare who would have thought some could breach an ATM and get it to become a slot machine?
Reply | Post Message | MESSAGES LIST | START A BOARD

Michelle 1/30/2018 | 10:01:39 PM
Re: Beat the bad guys I hope they get it just right. I want to see a major decline in attacks as the system improves. I want to see feel good stories about how the technology stopped really gnarly attacks.
Reply | Post Message | MESSAGES LIST | START A BOARD

[email protected] 1/30/2018 | 9:53:52 PM
Re: Beat the bad guys I agree there are many great ideas that fail when executed poorly. This, however, seems like a win for everyone by expediting the time to address security issues drastically. If the execution works it will certainly impact the security landscape now and in the future and keep the hackers on their toes!
Reply | Post Message | MESSAGES LIST | START A BOARD

Michelle 1/30/2018 | 1:37:30 PM
Re: Beat the bad guys Excellent point. This is clearly a longtail project. There will always be bad guys trying to steel data.
Reply | Post Message | MESSAGES LIST | START A BOARD

kq4ym 1/30/2018 | 9:50:16 AM
Re: Beat the bad guys To keep competitive Google is surely going to be going full speed ahead in security issues for the cloud business. But, it's interesting that "Chronicle's goal, "which is still several years away, is predicting and deflecting cyber attacks," as one wonders what security problems will continue in those "several years" awaiting full implementation.
Reply | Post Message | MESSAGES LIST | START A BOARD

Michelle 1/27/2018 | 4:59:20 PM
Beat the bad guys This sounds good (even if it's not original). I would like to see how well this works over time. Security alerts will probably continue to be an issue. I like to think we'll find a good solution.
Reply | Post Message | MESSAGES LIST | START A BOARD
EDUCATIONAL RESOURCES
sponsor supplied content
IDC Whitepaper: Key Considerations When Operationalizing Artificial Intelligence Strategy
Design Guide: best-in-class hybrid IT infrastructure with AWS Outposts
Blueprint: optimize data exchange with AWS Outposts
Ericssons Cloud RAN e-book: A comprehensive guide to adopting, deploying, and scaling virtualized 5G in your networks
The Four Key Components of Cloud RAN
How to get the most out of 5G mid-band in Cloud RAN
QCT Introduces New Innovative Family of Edge Servers for the Telco Marketplace.
TOOL - Interactive Experience: Learn how to Evolve your Architecture and Monetize Next Generation Metro and Edge Networks
Whitepaper  Achieving IP/Optical Convergence: Building from Existing Networks
Executive Guide  Enabling Next-Generation Metro and Edge Networks for Communications Service Providers
Educational Resources Archive
More Blogs from Wagners Ring
Podcast: Don't Call Us an SD-WAN Provider  Cato Networks