SAN FRANCISCO -- Cisco is taking the plunge into intent-based networking, a philosophy that redefines how the network operates, turning all those switches and routers into one automated, intelligent system.

Intent-based networking has been discussed around the industry for some time, but having Cisco Systems Inc. (Nasdaq: CSCO) describe the technology as "redefining the network for the next 30 years," as CEO Chuck Robbins said during a launch event here today, is significant. This could be a major step toward making the network smarter -- both in terms of automating network configuration and making the network smart enough to respond to real-time changes.

We'll define "intent" more specifically below, but here's the gist. The intuitive network, as Cisco calls it, is a radical departure that makes the network smarter and, maybe more importantly, easier to operate. 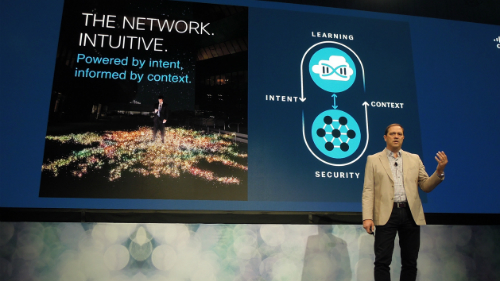 Cisco CEO Chuck Robbins declares the dawn of the era of intent-based networking.
"We have to drive ruthless simplicity" in order to accommodate a world of mobility and IoT, Robbins said. Specifically, large enterprises "need to turn the entire infrastructure into a single system."

To make this work, intent-based networking will be paired with telemetry and machine learning -- a feedback loop that lets the network take context into account.

DNA, catalysts and a "new" IOS
The intuitive network is not being rolled out to Cisco's whole portfolio yet. Today's announcements were confined to a few new products, although they've got implications for the rest of the enterprise portfolio. Here's what Cisco announced:

That means "the cloud can be extended all the way down to the edge of the network," Senior Vice President David Goeckeler said. "If I have IoT devices, and I want to learn more about those devices at the edge of my network, I can run the applications right on these platforms."

Catalyst 9000 represents a refresh of the entire Catalyst portfolio. For example, the Catalyst 9300, a fixed-form switch, is the next generation of the Catalyst 3000 line. The Catalyst 9400 is the successor to the entire 4000 line. And so on. All of these boxes are powered by...

Some new elements of IOS XE are in play, though. Container support has been added, along with the ability to program the OS through APIs. IOS XE was built with APIs in mind, but not all of those hooks for that support were in place until now, Prashanth Shenoy, VP of Enterprise Networks, IoT and Developer Platforms, told Light Reading at the event. IOS XE, in its new form, will be programmable by users and, like the ASICs, can host third-party applications, Shenoy said.

Robbins said 75,000 organizations are conducting field trials of the intuitive network, and the Catalyst 9000 models are orderable as of now.

Intent-based networking could be a relief for anybody who's daunted by Cisco's famous command-line interface, but this isn't just about convenience. Networks are reaching unprecedented scale and complexity thanks to trends such as cloud computing and the early incarnations of the Internet of Things (IoT). Configuring boxes one by one, or even manually configuring them in large groups, isn't going to cut it.

One interesting note: At a time when openness and open source sharing are in vogue, Cisco's intent-based networking is a home-grown recipe, created just for Cisco's portfolio.

JohnMason 6/30/2017 | 4:06:10 PM
EVery so often "Under intent-based networking, the network configures itself based on what outcome the user or operator wants."

This pops up every few years. I remember reading about this in the 80's. Still not here. If you include science fiction movies, then it goes back to the 50's.

And what about the others ?!!!

James_B_Crawshaw 6/21/2017 | 5:12:26 PM
Re: Cisco & Intent As you say Craig, Cisco didn't invent intent. Juniper have been banging on about this for some time. Sounds magical to me. But then as Clarke's third law states: "Any sufficiently advanced technology is indistinguishable from magic."
Reply | Post Message | MESSAGES LIST | START A BOARD

Scott_Ferguson 6/20/2017 | 10:11:51 PM
Re: Cisco & Intent @Craig: I think one thing we need to keep in mind as well is that Cisco has made a number of acquisitions in the last few years that are helping to push the company to this point. The one that comes to mind is AppDynamics, which is supposed to add a layer of intelligence and machine learning to the network and help move this process along.
Reply | Post Message | MESSAGES LIST | START A BOARD

Craig Matsumoto 6/20/2017 | 7:14:26 PM
Cisco & Intent The big-picture point to note is that "intent" isn't just a Cisco thing. The industry has been talking about this direction for a few years, and I've been assuming that intent-based networking would be a cornerstone of future networks.

Cisco has developed its own technology, so it's going to be interesting to see whether the rest of the industry starts building something even more open.