Oracle reported total cloud revenues up 44% to $1.5 billion for the second quarter of its fiscal 2018. But that wasn't enough for Wall Street, as shares were down 3.43% in after-hours trading.

Oracle Corp. (Nasdaq: ORCL) reported cloud-software-as-a-service (SaaS) revenue was up a whopping 55% to $1.1 billion in the second quarter fiscal 2018, which the company reported Thursday afternoon. Cloud-platform-as-a-service (PaaS) plus infrastructure-as-a-service (IaaS) revenues were up 21% to $396 million.

"Overall cloud revenue growth of 44% drove our quarterly revenue and earnings higher," Oracle CEO Safra Catz said in a statement. "Our success in the quarter was based on the increasing scale and the gathering momentum in our cloud business. I expect the business to continue to grow and strengthen over the coming quarters."

Oracle traded at $46.89 after hours Thursday.

Oracle plans to deliver its "self-driving database" next month, which executives said they expect will drive further cloud migration. The database, announced in October, "is fully automated and requires no human labor for administration. If a security vulnerability is detected, the database immediately patches itself while running. No other system can do anything like this. Best of all, we guarantee the price of running the Oracle Autonomous Database in the Oracle Cloud is less than half the cost of running a database in the Amazon Cloud," Oracle CTO Larry Ellison said in the company's earnings statement. (See Oracle's Ellison: We'll Beat Amazon Cloud Pricing by Half.) 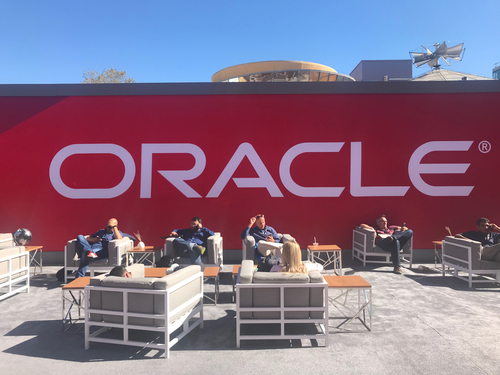 Relaxing during the Oracle OpenWorld conference in October.

The autonomous database is "going to be an enormous driver for customers to move their important workloads to the cloud," Catz said on the company's earnings call.

Ellison agreed. "The first big move of Oracle customer databases to the cloud will begin in January," he said on the earnings call. Previously, Oracle's customers haven't moved to the cloud at scale, not even Oracle's own cloud. But the economics of the autonomous database in the cloud will move customers "very, very rapidly," Ellison said.

On the call, Ellison engaged in his traditional competitor trash-talking. Asked by an analyst about reports that enterprises are moving off Oracle, Ellison retorted that Oracle's own competitors are doing business with the company, including Amazon.com Inc. (Nasdaq: AMZN), which signed a $50 million contract, as well as Salesforce.com Inc. , SAP AG (NYSE/Frankfurt: SAP) and SAP Ariba.

Michelle 12/31/2017 | 6:38:52 PM
Pop Customer's cloud usage is very interesting. They aren't even moving to Oracle's cloud? I'll be interested to see how the quarter ends for them. They expect growth, but anything can happen.
Reply | Post Message | MESSAGES LIST | START A BOARD

Phil_Britt 12/26/2017 | 5:26:14 PM
Street is King It doesn't matter how good results look. If you disappoint the Street, even if the Street;s expectations are too high, stock will get hit.
Reply | Post Message | MESSAGES LIST | START A BOARD
EDUCATIONAL RESOURCES