The Google partnership is noteworthy because Apple competes with Google on cloud storage and of course in phones. And Chromebooks compete with iPads and MacBooks, at least in some respects, for portable content creation and consumption. 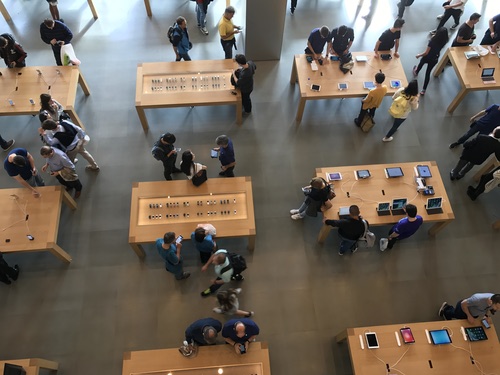 Apple uses archival Google's cloud services to power iCloud.
You're invited to attend Light Readings Big Communications Event  -- the one event that delivers fresh perspective on the rapid transformation of the telecom industry and the road ahead. We'll see you May 14-16 in Austin -- communications service providers get in free!

More than that: Steve Jobs hated Google. They were partners first, with Google's then-CEO Eric Schmidt sitting on Apple's board, and Google Maps occupying a place of honor on the iPhone. But as the Android began competing with the iPhone, Jobs, who saw Android as a ripoff, swore a vendetta. Jobs reportedly said: "I will spend my last dying breath if I need to, and I will spend every penny of Apple's $40 billion in the bank, to right this wrong. I'm going to destroy Android, because it's a stolen product. I'm willing to go thermonuclear war on this."

But that kind of blood hatred is rare in tech. Generally vendors are happy to compete, even trash-talk each other in marketing, and also turn around and cooperate where that makes sense.

Previously, the iOS Security Guide named Microsoft Azure as a cloud partner for Apple; that name is missing from the current version.

The Apple partnership is a small coup for Google, which is striving to gain traction in enterprise cloud, where it's a relative latecomer and lags far behind competitors Amazon and Microsoft. Other noteworthy Google customers include Kroger, PayPal, Snap and Spotify.

kq4ym 3/14/2018 | 2:34:43 PM
Re: Isn't this a bit cloudy? Perhaps not Yes, things are achangin'. It's not too often we take advantage of a long term deal to find that it's not really a deal that will last forever. Either the folks making the offer decide it's too expensive to honor the deal or they go out of business. Of course, if we read the fine print we'd see that the offer probably is subject to change at any time.
Reply | Post Message | MESSAGES LIST | START A BOARD

More precisely: Apple sells an ecosystem, with hardware at the foundation. The cloud is an add-on that provides additional value.
Reply | Post Message | MESSAGES LIST | START A BOARD

Joe Stanganelli 3/8/2018 | 3:35:59 PM
IBM, Google, Apple, and cloud The antipathy is well stated/related, but more jarring to me was Apple's announcement of its partnership with IBM a few years back.

In any case, this is a significant move that suggests that Apple really doesn't want to be in the cloud business -- which, truth be told, makes me a little less bullish on them.
Reply | Post Message | MESSAGES LIST | START A BOARD

Susan Fourtané 3/8/2018 | 1:07:51 PM
Re: Isn't this a bit cloudy? Perhaps not I you havent reached your limit yet and have some time to clean up your inboxes perhaps a good idea would be start deleting stuff. It all depends on how much you use your Google storage. But if you want to keep everything you have, its just not much what you have to pay for extra storage. Again, it all depends on how much storage you need.
Reply | Post Message | MESSAGES LIST | START A BOARD

kq4ym 3/8/2018 | 9:58:47 AM
Re: Isn't this a bit cloudy? Perhaps not The free storage space from Google has been a concern in the back of my mind for years although I'm not nearly close to the limit yet. But, when that might happen the question is to start deleting stuff, or just bit the bullet and pay extra.
Reply | Post Message | MESSAGES LIST | START A BOARD

Susan Fourtané 3/8/2018 | 12:27:31 AM
Re: Isn't this a bit cloudy? Perhaps not Well, yes, that would be ideal. :P I dont know how it could work, but it was a nice idea. Perhaps more like a wish. I had forgotten about Googles photos. But isnt that also in the whole storage package that reaches a limit? I think all your Gmail, Docs, and photos use the same storage capacity. Or, am I wrong perhaps?
Reply | Post Message | MESSAGES LIST | START A BOARD

mhhfive 3/7/2018 | 6:34:52 PM
Re: Isn't this a bit cloudy? Perhaps not Heh. If only Storj.io worked to directly offload data from clouds like Google Drive or Amazon... I'm not sure how exactly that would work, but it would be kinda cool. I'm sure someone is trying to scam these systems to get as much free storage as possible.... I know Google's "unlimited photo" storage policy has created an incentive for some geeks to turn their data into JPG files for free storage.
Reply | Post Message | MESSAGES LIST | START A BOARD

Susan Fourtané 3/7/2018 | 12:24:05 AM
Re: Isn't this a bit cloudy? Perhaps not I am very curious about Storj.io. Thats a good plan. You could test it with your Google unnecessary files and free some storage at the same time. :D
Reply | Post Message | MESSAGES LIST | START A BOARD

Susan Fourtané 3/7/2018 | 12:20:04 AM
Re: Isn't this a bit cloudy? Perhaps not Yes, yes. Its still unlimited. But after certain limit Google gives you the option of deleting unnecessary files or purchasing more storage. If you are soon reaching your limit you may want to start thinking about what you want to do. When I first reached my limit, I started deleting old and unnessary files. Then I just decided to upgrade and pay for more storage.
Reply | Post Message | MESSAGES LIST | START A BOARD
Page 1 / 2   >   >>
EDUCATIONAL RESOURCES