Blockchain is literally a technology in search of a problem to solve.

Don't believe me? Just ask Gartner Inc. analyst Ray Valdes. At a recent presentation at Gartner Symposium, Valdes noted that "blockchain" is the number one search term on Gartner.com.

Common question: "What are use cases for a blockchain?"

People are fascinated by blockchain. They just don't know what to do with it.

My colleague Curt Franklin, who heads up our sister site, Security Now, shared Valdes's information with me, and it contains some fascinating insights into much-discussed and little-understood technology.

Blockchain today doesn't solve a business problem for enterprises, Valdes says. Instead, it's a public relations problem -- the CEO or board of directors wants the company to look cool, and the CIO gets his bosses off his back by conducting a "pointless POC" using blockchain.

The CIO then gets to say, "See, we did something cool? Let's put out a press release! Can you leave me alone now and let me get back to work?" 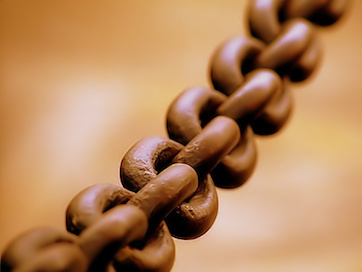 Photo by Toni Lozano [CC BY 2.0], via Wikimedia Commons
Keep up with the latest enterprise cloud news and insights. Sign up for the weekly Enterprise Cloud News newsletter.

However, blockchain can in fact solve real business problems, Valdes says, such as supply chain integrity, fragmented and slow business processes, and data integrity of the system of record.

Blockchain is a distributed ledger, a database that records transactions. Copies of the whole blockchain -- every transaction on the network -- are stored on every node of the network, rather than in some centralized bank or government institution. Blockchain operates best in recording transactions among untrusted actors.

What's blockchain good for? Johannes Ernst, an indy software developer and technology consultant, tackles the question in a blog post this week. Ernst notes the tendency for "applying blockchain to a problem where using it has no advantage whatsoever," but concludes that blockchain nonetheless has value.

"Blockchain is for weakly connected communities preventing someone from cooking the books," he says.

That's close. But I think blockchain is more useful than that.

And that covers a lot of ground. It may well cover the majority of transactions, now handled by expensive, hierarchical database systems backed by even-more-expensive public institutions such as banks and governments.

It seems likely that blockchain will become the standard ledger system, a general-purpose database for many purposes, and a platform for running many applications (known in blockchain jargon as "smart contracts"). It could prove to have similar revolutionary value as the web did.

Cisco Systems Inc. (Nasdaq: CSCO) and a group of big enterprises and small software developers announced an alliance last month to promote blockchain standards for the Internet of Things last month. One possible use case described by Cisco's Anoop Nannra: Autonomous vehicles might be able to pay for electricity on their own, using blockchain to store funds in a cryptocurrency wallet and to identify themselves as a noncompromised participant in an IoT network. (See Cisco & Partners See Blockchain Opportunities in IoT.)

Likewise, as network functions move from the cloud to the edge and back again, blockchains can help vouch for the integrity of environments where applications are running, he says.

Similarly, blockchain could be used to certify networks for distributed electrical transmission, and to sort out failed Wall Street transactions, Nannra says.

Next page: Loss of faith

Phil_Britt 10/28/2017 | 9:22:35 AM
Re: Centralized "blockchains" While I agree that at some point governments will look to have some oversight, so far block chain governments have stayed on the sidelines while block chains have shown tremendous growth.
Reply | Post Message | MESSAGES LIST | START A BOARD

mhhfive 10/22/2017 | 1:07:32 PM
Re: Centralized "blockchains" It doesn't have to be that way. I could imagine that a network of self driving cars might each have a "private" mode for when the owner doesn't want to lend out the car for the public mass transit system you describe.
Reply | Post Message | MESSAGES LIST | START A BOARD

mhhfive 10/22/2017 | 1:03:17 PM
Re: Centralized "blockchains" Governments can't really track criminal transactions made in cash now -- unless you count "marked bills" or certain bank heists? Arguably cryptocurrency is even better for tracking because there's an immutable public record of all transactions. A cryptocurrency doesn't *have* to be anonymous! A cryptocurrency designed for a BigBrother govt would even be more trackable than our current monetary system.
Reply | Post Message | MESSAGES LIST | START A BOARD

Joe Stanganelli 10/22/2017 | 10:20:21 AM
Re: Centralized "blockchains" @kq4ym: The problem with that is then, with all of these cars interconnected, you officially make public roadways mass transit -- as every car operates for grander efficiency purposes instead of for the individual owner/operator's purposes. You take away the very essence and benefit of road travel if you do this.
Reply | Post Message | MESSAGES LIST | START A BOARD

kq4ym 10/21/2017 | 3:37:04 PM
Re: Centralized "blockchains" That would be one of the interesting uses, i.e. allowing those driverless cars to automatically account for themselves, much in the same vein as IoT devices which will eventually be in the billions will be able to "think" for themselves and coordinate when even in less than super secure situations with unknown operators whose security might be very variable.
Reply | Post Message | MESSAGES LIST | START A BOARD

mhhfive 10/19/2017 | 11:09:35 AM
Re: Centralized "blockchains" It will be fascinating to see if any government adopts a cryptocurrency for its actual monetary system. I'm skeptical that any government will relinquish control of inflation, but there are several countries that don't exactly have much control over their inflation rates anyway.

But blockchain tech (without the coins) might hopefully secure voting records and social security payouts someday. Maybe we can do away with the insecure Equifaxes of the world by using blockchain tech to record everyone's credit transactions.
Reply | Post Message | MESSAGES LIST | START A BOARD

In any case, I fully understand and appreciate the demand for decentralized, limitedly traceable currency. As it is, we get tracked too much with our credit cards, debit cards, and checking accounts -- and cash transactions are increasingly viewed with suspicion (not to mention the problem that people face when they want to withdraw a large amount of cash -- and are told no!).
Reply | Post Message | MESSAGES LIST | START A BOARD

Susan Fourtané 10/16/2017 | 12:40:08 AM
Re: Centralized "blockchains" Daniel, exactly. Preventing counterfeiting is a great use case for Blockchain. Continuing with my thought on retail, by using Blockchain technology retailers can make sure about the authenticity of the products following every step in the supply chain. You can use a mix of Blockchain technology and 3D printed smart tags scannable by a smartphone to fish for counterfeits/prove authenticity of a product.
Reply | Post Message | MESSAGES LIST | START A BOARD

Susan Fourtané 10/15/2017 | 11:51:25 PM
Re: Centralized "blockchains" Indeed, Mitch. Also, retail can make a good use case for blockchain. Remember when retailers jumped onto the online marketplace boat back in the 90s? Retail was then changed forever. The same impact can happen with blockchain.
Reply | Post Message | MESSAGES LIST | START A BOARD
Page 1 / 2   >   >>
EDUCATIONAL RESOURCES