Two more giant vendors are looking to get in on the blockchain action, as Oracle and SAP launch rival blockchain projects.

Oracle Corp. (Nasdaq: ORCL) is launching Oracle Blockchain Cloud Service on Monday. It's a platform to allow enterprises to integrate blockchain into their business operations.

Blockchain is a distributed, open protocol for keeping a record of transactions. Because blockchain is decentralized, it doesn't require a central authority, such as a bank or government agency, to keep an official record. The complete record is kept by every node on a blockchain record, and the official version is determined by polling each node in case of conflict.

The lack of need for a central authority reduces cost and speeds up transactions enormously. The fact that blockchain is open, with multiple open source implementations, also reduces cost and accelerates innovation.

Blockchain launched with Bitcoin, and is also used by other cryptocurrency, to keep track of who owns which coin. One of the benefits of blockchain is that each digital object it tracks is unique, like paper records before cheap, ubiquitous photocopying. And digital objects can represent physical assets, such as cars, real estate and components used in manufacturing. 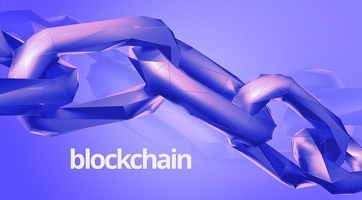 Image by By Davidstankiewicz (Own work) [CC BY-SA 4.0], via Wikimedia Commons

The technology can also be used as a platform to execute applications, known as "smart contracts."

IBM Corp. (NYSE: IBM), Microsoft Corp. (Nasdaq: MSFT) and Cisco Systems Inc. (Nasdaq: CSCO) are among leading enterprise vendors providing blockchain services. Now both Oracle and SAP are looking to get in on the act.

Oracle's Blockchain Cloud Service, announced Monday, runs as a platform for enterprises to build blockchain networks to track business. "We maintain everything -- the plumbing, the guts," Frank Xiong, Oracle group vice president of product development, tells Enterprise Cloud News. "The customer just needs to be focused on developing their own smart contracts and doing the transactions among partners and peers."

Oracle's Blockchain Cloud Service is enterprise-grade and scalable, with the ability to add more peers to a blockchain network as it grows. Information on the network is secured so that only authorized peers can access information -- not even Oracle itself can access that information without authorization, Xiong says.

Defense contractor Moog, for example, is working with blockchain to certify the quality of a part at each step of the manufacturing process, SAP's Gil Perez tells Enterprise Cloud News. Moog plans to use blockchain in its industrial, medical and aerospace businesses, the company said in an SAP statement.

Perez is a senior vice president for SAP Leonardo, an SAP business to help foster innovation, combining professional services and technology to help enterprises come up with fresh ideas for solving business problems, and then implement them. His responsibilities include IoT and digital supply chain, as well as connected vehicles and IoT security.

Additionally, SAP opened registration for the SAP Leonardo Blockchain Early Access program, to give customers and partners access to standard SAP products augmented with blockchain capabilities. The early access program will be open for registration until early Q1 2018.

Other enterprise vendors have also been busy on blockchain projects recently.

IBM is partnering with Sony on a project to store and manage student records and other critical documents and data. (See Sony, IBM Bringing Blockchain to Education.)

Mitch Wagner 10/9/2017 | 4:41:06 PM
Re: Early adopters who don't know what their doing? Depends on how you define thin computers. Today's relatively dumb mobile devices are smarter than top-of-the-line PCs of just a few years ago.
Reply | Post Message | MESSAGES LIST | START A BOARD

Well, there are certainly advantages for developing for and in the cloud now. I'm not sure that particular pendulum will ever quite swing back towards traditional PC workstations.

Over the years, there have been several attempts at "thin computers" -- and I think we're almost at the point where humans will almost never interact with very powerful computers directly, but via an internet connection to "supercomputers" located where energy is cheap (or labor or whatever prevailing resource is key for maintaining the profitability of a datacenter).

(Though maybe people might consider an iPhone X a handheld supercomputer of sorts....)

Actually, Larry Ellison has been a "thin computing" advocate for decades now... so it's curious that he hasn't exactly been at the forefront of it recently. I think Chromebooks are going to soon evolve into a much more popular kind of device.
Reply | Post Message | MESSAGES LIST | START A BOARD

Mitch Wagner 10/3/2017 | 6:18:14 PM
Re: Early adopters who don't know what their doing? mhhfive - It's also true that the cloud is just where new applications are being developed.

Mitch Wagner 10/3/2017 | 6:18:14 PM
Re: Early adopters who don't know what their doing? mhhfive - It's also true that the cloud is just where new applications are being developed.

mhhfive 10/2/2017 | 5:00:36 PM
Re: Early adopters who don't know what their doing? Block chain tech is totally a "cloud native" application. It's not even useful if it's limited to a non-cloud environment since it's distributed computing at its core. It will be interesting to see how IoT might benefit from blockchain security for verifying updates and preventing botnets.
Reply | Post Message | MESSAGES LIST | START A BOARD

It's arguable that blockchain requires integration into enterprise apps, and reliabilty that established companies can provide.
Reply | Post Message | MESSAGES LIST | START A BOARD

Mitch Wagner 10/2/2017 | 3:38:55 PM
Re: Early adopters who don't know what their doing? Blockchain is well suited to the cloud because it's used by coalitions of organizations.
Reply | Post Message | MESSAGES LIST | START A BOARD

mhhfive 10/2/2017 | 3:30:12 PM
Early adopters who don't know what their doing? I assume these competing platforms are really aiming to claim early adopters who don't exactly know what they're doing with blockchain, so they need some hand-holding to get through the process of setting things up.... and middle managers won't get fired for picking IBM/MSFT/Oracle/SAP/etc/etc.
Reply | Post Message | MESSAGES LIST | START A BOARD

mhhfive 10/2/2017 | 3:28:04 PM
Blockchain tech doesn't care where you host it..? It's curious how so many vendors are chasing blockchain when the tech doesn't really rely that much on the hardware underneath it? Blockchain end users only care that the transactions can be verifiably made and recorded... and that's why there are so many Bitcoin miners in China using hacked together datacenters.

I suppose if you're a financial institution looking to implement some blockchain-enabled features, you want to be able to re-assure users that everything is secure and scalable/reliable, but I haven't seen much differentiation that matters? *How* is IBM or Microsoft better for blockchain tech..? Maybe I'm missing something.....
Reply | Post Message | MESSAGES LIST | START A BOARD
EDUCATIONAL RESOURCES