Walmart and Microsoft are expanding their cloud partnership to beef up their competitive games against their common Amazon enemy.

The initial focus will be moving Walmart's thousand of internal business applications to Microsoft Azure, Microsoft said in a blog posted Monday morning. The two companies will also work on developing new applications using emerging technologies such as Internet of Things, AI and chatbots.

"About 30 technologists, including engineers from both Walmart and Microsoft, will work together side by side in the cloud factory, expected to open in early 2019 as an extension to a strategic partnership announced in July," Microsoft says. "The factory will be an expansion of Walmart's innovation hub, a vibrant workplace opened earlier this year in the center of Austins growing technology scene." The team is known internally as 4.co, for its location at Fourth and Colorado streets. 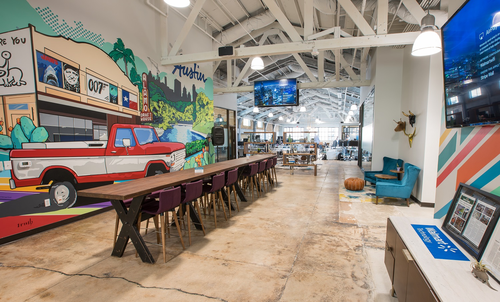 Walmart's "innovation hub" in Austin, Texas.
Now entering its fifth year, the 2020 Vision Executive Summit is an exclusive meeting of global CSP executives focused on navigating the disruptive forces at work in telecom today. Join us in Lisbon on December 4-6 to meet with fellow experts as we define the future of next-gen communications and how to make it profitable.

Walmart named Microsoft as its "preferred and strategic cloud provider" in July, part of a five-year agreement to transform its retail business and make shopping faster and easier for customers using machine learning, AI and other cloud technologies. (See Walmart Teams With Microsoft Against Common Amazon Enemy.)

Additionally, Walmart plans to make use of Microsoft's AI and Cognitive Services in Azure, beginning with applying natural language processing to post-payment auditing.

"Microsoft's going to get to see stuff at a scale they've never seen before," Clay Johnson, Walmart executive vice president and enterprise CIO, says on the Microsoft blog. Walmart has 11,200 global stores and 2.2 million employees.

At the Microsoft Ignite conference in September, company CEO Satya Nadella shook a scolding finger at Amazon. Nadella didn't name Amazon directly, but he was clearly giving AWS the side-eye when he said it was a "strategic mistake" to depend on a provider "who is providing you [with] a commodity on one end only to compete with you on the other end." (See Microsoft: We're Not Bullies Anymore! We're Nice!)

Several software and cloud services companies at the Ignite conference said they're seeing retailers moving cloud workloads from AWS, put off by competition from Amazon's own retail business. These were companies doing business with both Microsoft and AWS. Although several vendors and at least one analyst say they're seeing no such migration. (See Are Retailers Leaving Amazon Cloud?)