But a 7% fall in share price reveals investor worries about how the platform will adapt to free users, and to a vaccine.

The video teleconferencing platform's revenues beat expectations by 12% in the three months to the end of October 12.

Regions outside North America are being particularly kind to the San Jose-based company, with 629% year-on-year revenue growth in Asia-Pacific, Europe, the Middle East and Africa.

Zoom's research and development spending was also reassuringly up to $25 million in the quarter, an 80% increase on the same quarter of 2019. 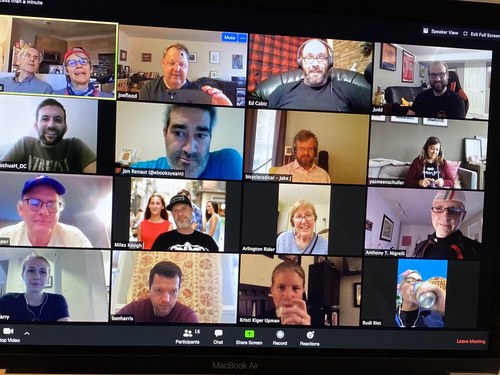 2020 Vision: Seeing family and friends on a Zoom screen for social gatherings has become the norm this year.
(Source: Joe in DC via CC BY-NC-ND 2.0.)

From a sales perspective, Zoom now has 433,700 subscriptions among businesses with more than ten employees, a group which makes up 62% of its revenue. Cheerily for Zoom, this group grew by 485% year-over-year during the quarter.

For now the company is focusing on growing its number of smaller business subscribers, and converting monthly paying subscriptions into annual ones.

With smaller customers making up 38% of Zoom's revenue, non-renewals among these customers, who tend to pay monthly, has been a concern for investors.

But it was a decline in margins for Eric Yuan's company that made markets worry.

Gross profit margins in the third quarter were down to 68.2%: a steady decline from 72.3% in the second quarter, and from 82.9% in the same quarter last year. The company attributed this to a "higher percentage of free users," especially in educational institutions, and a higher utilization of public cloud services.

The bigger lingering question is what happens after the pandemic. Do people switch off their Zoom?

The company, maybe not surprisingly, thinks "remote work trends are here to stay," as Steckelberg argues.

Zoom's share price has tumbled 16% since its high last month. The Pfizer, Moderna and Oxford-AstraZeneca vaccines have also emerged since then.

The company's shares fell a further 7% in after-hours trading following the announcement, but they are still up by a factor of seven in the last year.

Whether all this means spring will see Zoom fatigue set in among investors, or the company will continue as a darling of the new normal, is anyone's guess.

It has also announced new collaborations with the smart home offerings of Facebook, Google and Amazon, so you and Alexa can Zoom together.

Meanwhile Microsoft is coming after the platform in earnest, dropping the 40-minute limit on Teams for free users (sound familiar?). Microsoft is also promising 24-hour Teams calls with up to 300 participants in the coming months.

Doubtless this is meant to reassure investors, even if it strikes the rest of us as a new circle of hell.